Fall is a fabulous time to take a road trip for leaf peepers. However, hopping on a train offers even more time to soak up the collage of golden yellows, burnt oranges, and toasty reds on your scenic journey.

Amtrak has several scenic routes throughout the country that offer fall foliage flair. Not only do you get to roll past the changing colors of maple, oak, ash, and dogwood trees, but you don’t have to worry about traffic or navigation! There’s free Wi-Fi, and you can even bring your bike or small pet. Many of the routes feature sleeper car accommodations and some have a sightseer lounge, perfect for spying the spectacular scenery.

You know the expression, “It’s not the destination, it’s the journey”? Well, these fall foliage excursions make getting there part of the experience. However, we’ve also included some things to do along these train routes. They were chosen for the most stunning views fall has to offer.

Stop in Portland, Maine, for a lobster roll crawl. Shop local boutiques, treat yourself to area bakeries, and visit the farmers market.

Heading north, the Adirondack train departs New York City’s Penn Station each morning and arrives in Quebec 10 hours later. Board the southbound train anywhere along the line and arrive in the “City That Never Sleeps” in time for dinner. From the Hudson Valley’s lush wine country to the Adirondack Mountains, this route features some of the best fall foliage in the U.S.

In the Big Apple, check out the changing leaves of Central Park on foot or by bike. Better yet — take a carriage ride!

Perfect for birdwatching, paddling, and hiking, Lake Champlain’s 587 miles of shoreline boasts even more gorgeous scenery. Nearby, you can go apple picking in the quaint Vermont town of Shelburne.

Check out the fall colors at Mount Royal Park and Montreal Botanical Garden when you arrive in the province of Montreal.

One of the most beautiful train trips in all of North America, the California Zephyr belongs on your fall trip bucket list. Running daily between Chicago and San Francisco, the Zepher’s 51-hour route covers the ground in Illinois, Iowa, Nebraska, Colorado, Utah, Nevada, and California. Going through both the Rockies and Sierra Nevadas, this train passes all kinds of points of interest, including Moffat Tunnel, Colorado’s Gore, Byers and Glenwood canyons, Winter Park, Truckee River, Donner Lake, San Pablo Bay, and the Carquinez Strait.

Chicago is one of the best U.S. cities to visit in October. Take one of the Windy City’s well-known architecture boat tours along the Chicago River. Lincoln Park Zoo is another great place to take in the crisp fall air. Take advantage of some of the numerous apple-picking opportunities in the Chicagoland suburbs.

Nebraska plains give way to the rich golden hues of Colorado’s aspen trees in the heart of the Rockies. Home to 85 miles of bike trails, Denver, the Mile High City, also boasts one of the most best botanical gardens in the U.S.: Denver Botanic Gardens. If you happen to visit the city at the beginning of October, you can catch one of the nation’s largest beer festivals, the Great American Beer Festival.

Salt Lake City’s eponymous lake is the largest saltwater lake in the Western Hemisphere. Pack a picnic and take a hike, then watch the brilliant sunset over the lake. Farther west, the dogwoods and maples of the Sierra Nevadas put on a stellar show of oranges and reds.

Home to many beautiful parks, San Francisco is perfect for leaf peeping. So are the surrounding attractions of the Muir Woods, Yosemite, and wine country. Just be sure to pack some layers for this trip. TravelAwaits writer Jill Dutton says temps change at every stop!

Following the historic B&O line, the Capitol Limited train runs 18 hours between Washington, D.C., and Chicago daily. In D.C., bike miles of trails along the Potomac River. The train runs through the Potomac Valley, past historic Harpers Ferry, West Virginia, and the Allegheny Mountains. Part of the Appalachian Mountain Range, the Alleghenies hit peak leaf-viewing season in mid-October. Take it all in from the panoramic windows on the upper level of the train’s sightseer lounge. From Pittsburgh, the train heads north toward Cleveland, across Ohio and Indiana, and into the center of Chicago.

Sure, you could hop on a flight from New York City to Chicago, but it would be a lot less scenic than making the 26-hour trip on Amtrak’s Cardinal train. Departing 3 days a week, this route takes you on a journey across the northeastern United States.

Autumn pigments the trees of the Blue Ridge and Allegheny mountains, the Shenandoah Valley, and the West Virginia countryside. West Virginia’s beautiful state parks, including Blackwater Falls, Babcock, and Pipestem Resort State Park are all prime places for checking out the changing leaves.

Heading west, the train rolls along the banks of the mighty Ohio River to Cincinnati, then on to Indianapolis, and northward to Chicago.

Follow the footsteps of early pioneers along major portions of the Lewis and Clark Trail on this bucket list-worthy train trip. Amtrak’s Empire Builder train travels over mountains, through alpine valleys, and past 7,000-year-old glaciers. The 46-hour adventure between Chicago and the Pacific Northwest departs daily. Its route traverses the Rockies, the Continental Divide (the lowest pass between Mexico and Canada), and Glacier National Park. The train starts in Chicago and travels through Nebraska, North Dakota, and the picturesque Pacific Northwest.

Bypass buttes and bluffs, sidle up to mountain streams, and traverse the Mighty Mississippi. Marvel at the majesty of the American West, dressed in its autumnal best.

Once you get to Big Sky country, keep an eye out for mountain goats, bighorn sheep, eagles, and osprey. Going to the Sun Road’s awe-inspiring vistas are even more beautiful when the trees are turning colors.

From Spokane, continue on to Seattle, where you can take a ferry across Elliott Bay for excellent views of the Olympic and Cascade ranges. Alternatively, you can head down the Columbia River Gorge toward Portland. Pedal your way through parks and public gardens and across the Willamette River. Mount Hood and Beacon Rock offer even more spectacular views about an hour outside of the city.

New England is known for its leaf-peeping opportunities. Take in views of the Hudson River Valley, charming farms and villages, and the gorgeous Green Mountains between New York City and Rutland, Vermont. Amtrak’s Ethan Allen Express takes riders on this 5-hour-and-30-minute journey daily.

At 300 acres, Pine Hill Park in Rutland features more than 17 miles of trails for hikers. Vermont pick-your-own apple orchards grow over 150 varieties of apples. After a day of apple picking, cozy up at a Vrbo.

Operating daily between St. Louis and Kansas City, the Missouri River Runner’s scenic journey lasts about 4 hours and 40 minutes. Peak leaf-viewing time in the Show-Me State is mid-October. In St. Louis, admire Forest Park’s fall foliage. The train goes through Independence, Missouri before terminating in Kansas City. Celebrate harvest in the heartland by visiting a pumpkin patch such as Faulkner’s Ranch. 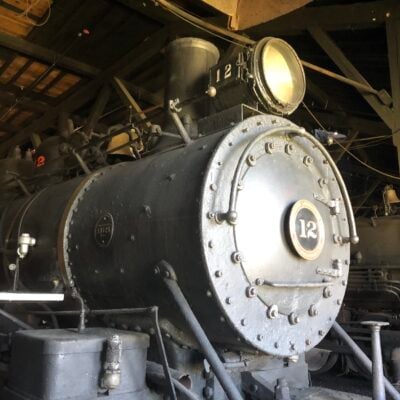 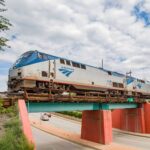 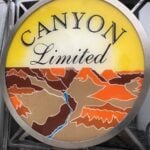