Glacier Park’s Going-To-The-Sun Road: What To Know Before You Go

Everything about Going-to-the-Sun Road seems improbable to the point of absurdity. This spectacular 50-mile road through the Rocky Mountains of Glacier National Park in western Montana seemingly defies the laws of physics, all while offering visitors a spellbinding travel experience.

In 1921, just 11 years after Glacier National Park was inaugurated, construction began on Going-to-the-Sun Road, designed to be the sole road traversing the park’s east and west sides. It was an ambitious undertaking, and construction wasn’t completed until 1932. But the slow and steady approach produced spectacular results. When the work was completed, the road was hailed as an engineering marvel — and a progressive one at that. Going-to-the-Sun Road was the first-ever National Park Service project for the motoring public, who were slowly embracing the newfangled automobile. Remarkably, despite the perilous working conditions, only three workers died during construction (the deaths occurred during an unexpected avalanche).

While I can’t attest to what it was like to drive Going-to-the-Sun Road in the 1930s, I suspect it was every bit as thrilling then as it was for me this year. Climbing more than 6,000 feet, rounding hairpin turns, enjoying the soaring views — there’s nothing like it! You’ll want to set aside several hours to complete the drive and stop at every pull-out to soak in the scenery.

The National Park Service has declared it to be one of the most beautiful drives of all the National Park routes, and I can’t personally think of a more stunning road and exhilarating drive.

Anyone who pays for admission to Glacier National Park can drive Going-to-the-Sun Road, provided that it’s open. Heavy winter snowfall and regular maintenance mean that the road is generally closed between mid-October and mid-June.

Here are some things to know about the road before you go.

You Can Design Your Own Experience

Going-to-the-Sun Road is short on amenities (there are no places to stop for food or fuel once you begin the drive uphill, and bottled water is only available at Logan Pass), but it’s got plenty of great features to explore. Independent travelers will love hiking the Highline Trail, which begins at Logan Pass and includes a section of wildflowers known as the Garden Wall. Families can picnic at Big Bend (an amazing scenic spot and a rare area where the side of the road is a gentle, gradual slope and not a heart-pounding drop-off). Another great option is the appropriately named Lunch Creek, where the original highway construction workers paused for their lunches in the 1920s.

While there are hundreds of different cars touring Going-to-the-Sun Road at any given time, no vehicle stands out like the brilliant red vintage buses driven by the “Jammers.” In Glacier National Park’s early days, the Jammers were responsible for jamming the manual gearbox into low to safely negotiate the steepest parts of the road. Today, the term refers to both the buses themselves — lovingly restored so that they run even more smoothly than they did when they were first delivered in the 1930s — and their drivers, who wear the name as a badge of honor.

Taking a red bus tour was every bit as exciting as I had hoped it would be. Our guide, Jammer Cass, was passionate about the history of Glacier National Park and the Jammer fleet and community. We stopped frequently so that we could “prairie-dog” — or look out the top of the open-air bus to get unobstructed pictures. We also had plenty of opportunities to get out of the bus and explore on foot. Best of all, the driving was in someone else’s capable hands, leaving everyone on board free to soak in the beautiful views (or, in my case, shrink back on occasion from the drop down the side of the mountain!).

Just how popular are the Jammer buses and their drivers? During my tour, I was stopped by another motorist, who told me that I never had to buy a lottery ticket — I had been given a lifetime’s worth of gloriously good luck just by being on a Jammer tour and getting beautiful weather for our September drive! Suffice it to say that this is one beloved activity.

Aside from the Jammers, there’s only one other tour provider that is permitted to operate on Going-to-the-Sun Road. Glacier Sun Tours also uses small buses, albeit much more modern ones. The company is owned and operated by Ed and Toni DesRosier, members of the Blackfeet and Assiniboine Sioux Tribes. Their program covers most of the same points of interest as the Jammer tour, and also incorporates the culture and history of the area’s indigenous people. I haven’t participated in this tour personally, but it’s also extremely popular.

There Are Plenty Of Animal Residents

Glacier National Park is famous for bears and, indeed, a grizzly bear was spotted while I made my way around Going-to-the-Sun Road. There was just one problem — I couldn’t see him! Other travelers spotted him at a distance, but my eyes weren’t sharp enough. Mountain goats and bighorn sheep are also frequently seen, especially around Logan Pass. With a little luck, you might also see beavers, wolverines, elk, lynx, and pikas. There are even mountain lions in the park, though perhaps it’s best that you don’t see them too often! As always, remember to never, ever approach or feed any wild animal.

Tours Can Sell Out Well In Advance

Both tours sell out well in advance, especially tours on popular weekends during peak season. If taking a Jammer guided bus tour along Going-to-the-Sun Road is on your Glacier National Park bucket list, make your booking as soon as possible.

It’s not just your bus tour you need to book in advance. Glacier National Park’s historic lodges, as well as the hotels, lodges, and chalets in the park’s border towns, also book up well in advance. In particular, the gorgeous Many Glacier Hotel, considered by many to be the most beautiful in the park, sells out early.

Whether you’re hanging with the Jammers or traveling on your own, you’ll notice that Glacier National Park starts out cool and warms up over the course of the day. I started the day shivering under the thick warm blanket that Jammer Cass provided and ended it with a sunburned nose! Layers are the key to enjoying all parts of Glacier National Park, and especially Going-to-the-Sun Road. I’m very glad that I brought my wool stocking cap with me — and sad that I didn’t have extra sunscreen on hand.

Be sure to bring along a refillable water bottle, your own snacks, and — yes, ! — if you’ll be hiking or exploring beyond the main road. There are several spots within Glacier National Park where you can buy or — even better — rent it. Renting is a practical, sustainable solution since, thankfully, the overwhelming majority of visitors never have cause to use it. And if you don’t want to miss seeing a grizzly bear as I did, consider a portable pair of binoculars if your eyesight isn’t perfect. 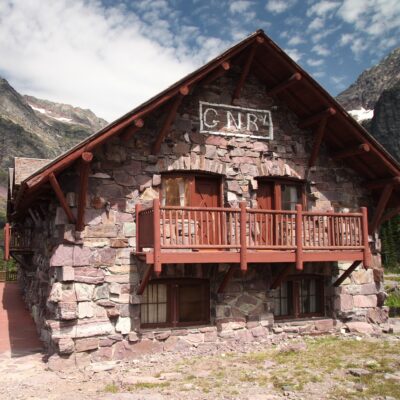 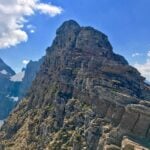 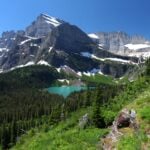 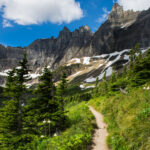