The United States and Canada are filled with beautiful landmarks that are perfect for exploring from the cushy seat of a train car.

Whether you’re riding through the Rocky Mountains or way up north to the land of the polar bears, a scenic train trip in North America will allow you to soak up the best this continent has to offer. And, unlike a plane ride from one coast to another, a train trip through Canada or the U.S. will force you to live in the moment and enjoy the journey — because the journey is what it’s all about!

From VIA Rail’s cross-country service in Canada to Amtrak’s routes across America, these are the best North American train trips to add to your bucket list.

For Music: City Of New Orleans

A 900-mile train ride through America’s musical history will give you a unique perspective on Midwestern and Southern U.S. culture. The route starts in Chicago and goes through Illinois, Tennessee, Mississippi, and finally, Louisiana. While the train ride alone takes 19 hours, we recommend breaking the route up to enjoy the multiple musical hot spots along the tracks.

Start in Chicago, where you can browse the vinyl at Reckless Records or spend an evening listening to some of the Midwest’s best music at the Chicago Symphony Orchestra. After you’ve had your musical fill in Chicago, hop on the train to the next hot spot: Memphis. This city played a key role in America’s musical past. Soul music was born at record label Stax (now a museum) in downtown Memphis; icons Otis Redding and Isaac Hayes are just two of the many stars who produced music in the historic studio. You could also visit the Memphis Music Hall of Fame, Elvis Presley’s Graceland estate, or the Memphis Rock ‘n’ Soul Museum on your stopover.

The last leg of the trip will bring you to the jazz center of the U.S., New Orleans. While it’s the last stop on the train ride, it’s arguably the best. The birthplace of jazz pays homage to its past at Preservation Hall and offers a variety of tours and cruises that center on the one thing you’re definitely into if you’re taking this train ride: music!

It’s hard to beat the beautiful views of the Pacific along America’s West Coast, and a bucket-list-worthy train ride is one of the best ways to soak it all in. The 35-hour Amtrak Coast Starlight route has been dazzling passengers since 1971. The train starts its journey in Los Angeles and then travels up the coast to Santa Barbara, San Francisco, Sacramento, and Portland before stopping at its final destination, Seattle. This train ride is beloved for its views of the Pacific Ocean and the snow-covered Cascade Range. The sights change seasonally, so the ride is different throughout the year.

For Adventure: The Cascades

The Pacific Northwest is gorgeous from any angle, but from a train, it’s unreal. The Cascades by Amtrak will take you on an evergreen-ringed ride from Eugene, Oregon, to Seattle and then along the Puget Sound before reaching its final destination, Vancouver. Be ready for wildlife, dazzling golden hours, and beautiful scenery on this 4-hour ride. Given the changing backdrop, The Cascades is a breathtaking ride throughout the year, but autumn is particularly stunning for the hues of red, orange, and gold that line the tracks.

For History: The Empire Builder

The Empire Builder by Amtrak takes passengers along the path blazed by Lewis and Clark, which traverses the Rockies, the Continental Divide (the lowest pass between Mexico and Canada), and Glacier National Park. The train starts in Chicago and travels through Nebraska, North Dakota, and the picturesque Pacific Northwest. This is a long-haul ride — think 46 hours — but it hardly feels that way when you’re encountering fascinating historic sites at every turn.

Given Chicago’s chilly winter temperatures, late spring, summer, and early fall are the best times to ride this train.

For National Parks: Peaks To The Pacific

Sure, Chicago isn’t known for desert climates, but as the starting point for the more than 40-hour Southwest Chief train ride by Amtrak, it’s the gateway to America’s most stunning desert. On this train route, you’ll experience the best of America’s Southwest. The journey takes desert enthusiasts near the Grand Canyon (which is reason enough to go!) as well as through the red cliffs of Sedona and through one of New Mexico’s finest cities, Albuquerque.

Given that you’re traveling through the desert, it’s best to take this trip during the cooler spring or fall months to ensure you’re comfortable and able to explore the great outdoors at any point during your journey.

If you’re ready to check three of North America’s most impressive cities off your list — New York City, Montréal, and Québec City — the New York and Eastern Canada route is the perfect adventure for you. This 11-day journey starts in the Big Apple and takes travelers from one skyline to the next, with a splash of gorgeous nature (Niagara Falls) in between.

The trip is different every season. In the fall, the Northeast’s iconic foliage abounds. Come winter, holiday cheer takes over New York City and Québec City. And, as the weather warms up during the spring and summer, pops of green add color to the trip.

Every fall, tourists flock to Churchill, Manitoba, for a chance to see the elusive polar bears in their natural habitat. The remote northern town of Churchill has built a tourism industry around polar-bear sightings, and the area becomes bear country in September and October. That’s why this train route — the only dry-land connection to Churchill — is so popular.

But, while many think these tracks are primarily to get wildlife enthusiasts from point A to point B, there’s much more to see on the ride. Expect vast and changing landscapes with night stars that take your breath away; you can see everything clearly from the train’s panoramic dome. Soak up the majesty of the Canadian wilderness, and keep your eyes open, since you’ll certainly see some wildlife along the way.

A ride on the Denali Star is one of the best ways to fully grasp how wild and remote Alaska’s wilderness really is. This more than 350-mile route starts in Anchorage; stops in Talkeetna, Alaska; and ends at the highlight of the trip: Denali National Park & Preserve. The trip is seasonal, operating only in the summer. We recommend spending a few nights in Denali National Park or Talkeetna before making the final — and long — trip north to Fairbanks.

For A Little Bit Of Everything: Classic Canada Coast To Coast

If you want a little adventure, a dash of history, and a dose of culture, the all-in-one Classic Canada Coast to Coast is the best North American train ride for you. As the name suggests, this train departs from Canada’s charming east coast and arrives at the country’s mountainous west coast. The adventure begins in the quaint and craggy coastal town of Halifax. The train stops in the enchanting city of Montréal, in the vibrant city of Toronto, and at the iconic Niagara Falls before roaring deep into the wilds of Canada’s more remote and scenic west coast, where wilderness destinations like Jasper National Park and the Canadian Rockies await.

This 16-day trip is best taken in summer or early fall, when the weather tends to cooperate and when daylight lasts well into the evening.

Have you been bitten by the train-travel bug? Read on for a look inside one of the most iconic trains in the world: the Orient Express! 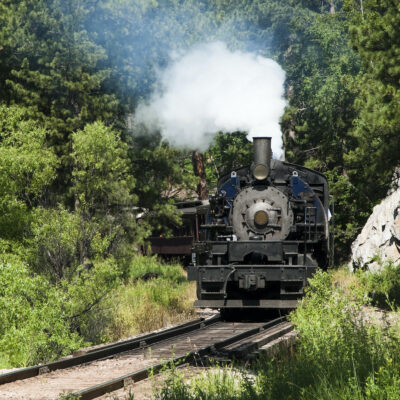 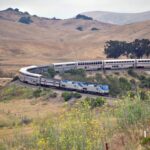 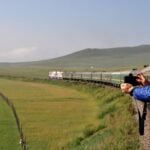 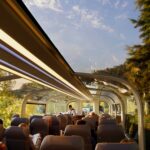