When confronted with the word “desert,” most of us think of barren, boring places not worth seeing. But just because deserts are dry places — by definition, they receive no more than 10 inches per year — that does not make them boring, and indeed, some of them can be truly stunning.

Also, deserts come in various guises. There are four officially recognized types of desert. These range from the one most of us think of first — hot and dry and sandy, such as the Sahara — to semi-arid deserts, coastal deserts, and even cold deserts. All offer different landscapes and thrills, and pretty much the only thing these have in common is the lack of rain.

Having spent quite a few years living in desert countries such as the United Arab Emirates, Oman, and Qatar, I have come to love deserts, especially the pretty ones with seemingly endless sand dunes stretching to the horizon. Second only to the open ocean, they offer a calmness, a serenity, and a restfulness that few other landscapes do. Plus, if you really want to, you can have adrenaline-rush fun in them.

Here are some firm favorites, in no particular order.

Stretching across Saudi Arabia, touching Yemen, Oman, the UAE, and running its course in Qatar, the Empty Quarter is the largest sand desert in the world, and one of the most magnificent natural wonders of the Middle East. It is easily reached from Abu Dhabi. This is the place where I first truly appreciated how magnificent, how seemingly endless a desert can be, and how small and insignificant you feel standing there. And how vulnerable.

Unless you are going with other drivers who know how to stay safe in the desert, take a tour with professionals. I recommend the Liwa Desert Safari tour.

Pro Tip: While the tours always offer you drinking water, bring extra, and bring a good hat. Not a pretty hat, but a useful sunhat. The sun is a formidable piece of nature that should not be taken lightly.

While the Sahara is widely acknowledged as the desert — after all, ṣaḥrāʾ means “desert” in Arabic — it has also turned into a bit of a tourist circus. Easily reached from Morocco, there are camel safaris, 4WD drives, camps in the desert, and opportunities to have your picture taken wearing the royal blue Tuareg headscarves. To get away from the touristy camel ride belt, you will need to go on a longer tour, deeper into the desert and touching on some of its other terrains.

I am not poo-pooing the common Sahara experience. You still get the sense of the desert and can have lots of fun, but you need to sneak out for a look at night if you want serenity.

You know those eerie images of stark, leafless trees standing in front of a bright orange sand dune? That is the Namib desert, a coastal desert stretching along the Atlantic coast of Namibia.

It is pure magic. The landscapes are otherworldly, and you might encounter animals, such as elephants and lions, wandering along the beach and even taking a dip in the ocean waves. Then you have the spooky Kolmanskop, a deserted, once very rich town that is being reclaimed by the sands. So many magnificent sights, and a true adventure.

Pro Tip: This is road trip country, either self-driving or part of a tour. There are many options, from private to larger groups and from budget to luxury.

Driving up to, or flying into Ayers Rock Airport in the Northern Territory, you get the idea why this centrally located spot in Australia is called the Red Centre. The ground, made up of sand, rocky outcrops, and vast stretches of flat desert sprinkled with coarse vegetation, is dark red. Obviously, the one spot that stands out in this landscape is Uluru, the holy monolith that adds that touch of magic and mystery to this already alien landscape. But there are other unique rock formations, as well as hikes through the desert. There are also local Indigenous peoples to learn from, telling their tragic history through wonderful stories. And so much more.

Pro Tip: Staying overnight gives you the pain of choice, as accommodations range from the utterly luxurious to the very budget-friendly.

From a red desert to the White Desert. Part of the Sahara but at the Egyptian end, the White Desert offers a landscape not seen elsewhere. White mushroom-like outcrops dot an area of around 166 square miles in northwestern Egypt, 500 miles from Cairo.

While the desert looks like it’s made from salt, it truly is white sand and wind-sculpted rock, bleached by the sun and contrasting against the brown sand underneath. And while it looks like nothing could possibly live here — apart from in the oasis some 30 miles to the south — you might be lucky enough to spot gazelles, jackals, and the rather cute fennec fox with their big ears on your visit.

Pro Tip: Due to the distances involved, all tours tend to be a few days long, but they’re worth the effort.

When you think of Iceland, well, snow and ice come to mind, right? Climbing over glaciers and finding mini icebergs on black beaches. So, with snow and ice around, there must be enough precipitation, surely? But indeed, there are not only cold deserts here on this northern Island, but also the largest area of volcaniclastic sandy desert on Earth.

The Highlands of Iceland are a harsh region on this already harsh island. Despite the regular rain and snowfall in the country, The Highlands area is a desert because the rain does not get absorbed by the topsoil — instead, it goes straight through the porous layers without any potential plants getting a look in.

Pro Tip: Only accessible during summer, and then only with serious off-road vehicles and driving skills, you can enjoy this northern desert with tours setting off from Reykjavík.

So, we’ve discussed hot and dry, coastal, and cold deserts. This one, in Spain’s southeast, is a semi-arid desert. Like Iceland’s desert, the Tabernas receives some rain, but in such a way that when it falls, it runs off and does not penetrate the ground, making it officially a desert. Instead, you have a rugged, high-lying landscape, dotted with some vegetation (such as sea lavender) and a sparse animal population that includes lizards and the hardy Algerian hedgehog.

Looking like the quintessential Wild West, this region is also Spain’s answer to Hollywood, with films such as Once Upon a Time in the West, A Fistful of Dollars, Lawrence of Arabia, and more recently, the TV series Game of Thrones, having been filmed here.

Pro Tip: This is a great hiking country, with guided hikes available.

Some of Qatar’s dunes sing. Yes, sing. Not too far from the Inland Sea, complete with its flamingos and adrenaline-fueled activities such as dune-bashing and sandboarding, lies a quieter spot, the so-called Singing Sand Dunes of Qatar. The very rare combination of horseshoe-shaped standalone dunes and sliding sand let the dunes sing, or more aptly, moan. Often, if the wind is right, they do it all by themselves — otherwise, a person sliding down on his or her bottom will get an impressive result. They are pretty and fun, and they’re not on the main tourist drag, so you might just get an entire dune to yourself.

Pro Tip: If you don’t have a sled, bring a sturdy shopping bag with you and sit on it when you slide down, using the handles as not-terribly-effective steering. Better than a bare bottom any day.

The Gobi Desert is a cold, sandy desert with areas of brushland lying between Mongolia and China. It measures some 1,000 miles across and 500 miles from top to bottom.

It is difficult to get to unless you happen to find yourself on the Trans-Siberian Express. So far, I have not managed to get there yet, but it is on my bucket list. For my next big birthday, Mongolia is on my wish list, and there are several ways to see more, including taking in the Dunhuang oasis in China, which is an awful lot less remote than it looks at first glance.

Pro Tip: Did you know that there are also well-known Singing Dunes in the Gobi in Mongolia? It is known as the Khongor Sand Dune. That is also on my to-do list — then I can compare the noise the Mongolian dunes make with the moaning of the Qatari dunes. Any excuse to travel to a desert.

Interested in the destinations mentioned in this article? Surf our categories on: 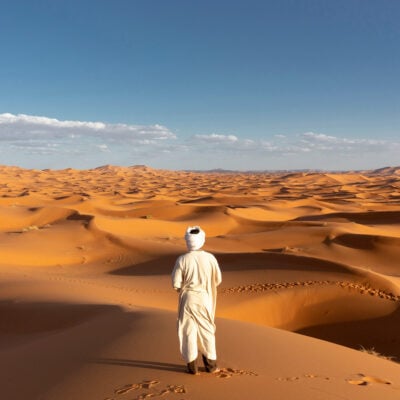 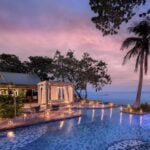