Uluru in Australia’s Northern Territory is part of a UNESCO World Heritage Site. The giant monolith is the largest single rock formation in the world. Deep in the Red Centre, it feels like Australia’s heart, and to see it is to experience the nation’s heartbeat.

You may know Uluru by its previous name — Ayers Rock. The name changed in 2002 due to the wishes of its traditional owners, the Anangu people (link opens as PDF). For them, it is a spiritual place, and all visitors sense this spiritualism in their own way.

I first experienced Uluru through a coach window when arriving at night. The sky was black but the looming shape of Uluru was even blacker. I sensed its formidable and deeply rooted power even in the darkness.

At daybreak “the Rock” awakens slowly, intensifying in color until it glows like a red-hot poker against the electric blue sky. During the day, it basks under the fiery sun like a chameleon. For the most part, it’s terracotta. But if the weather is overcast, it turns milky gray or a bruised purple. At sunset, there are glimpses of dusky pink and lilac.

It rarely rains in the Outback. When it does, rivulets cascade down Uluru’s slopes and gullies, finding the courses carved by 500 million years of weathering.

Since October 2019, tourists have been banned from climbing Uluru because of its deep spiritual significance to the Anangu people. There’s another reason not to climb.

When I first visited, climbing Uluru was then allowed. While much younger at the time, I didn’t even reach Chicken Rock, the famous point where people with a fear of heights turn back and scramble down on their butts. Instead, I walked around the base.

Turning a corner, I stumbled across something most climbers never saw. A series of plaques in remembrance of some of the 37 people who died during or shortly after their climbs. Causes included heart attacks and falling to their deaths. To this day, I don’t regret not climbing Uluru.

And if visiting today, there are so many other great ways to explore Uluru. Here are my recommendations.

1. Follow In The Ancient Footsteps Of The Mala People

Visit the painted caves and waterholes of these traditional custodians, members of the world’s oldest continuous living culture. Walks are free and led by park rangers. It’s an easy 1.2-mile return walk that is wheelchair accessible. Tours take 1.5 hours and depart at 8 a.m. October through April and 10 a.m. May through Sept.

2. Tiptoe Through The Lights Fantastic

English artist Bruce Munro first visited Uluru in 1992. He imagined creating “an illuminated field of stems that, like the dormant seed in a dry desert, would burst into bloom at dusk with gentle rhythms of light under a blazing blanket of stars.” In 2016, he returned to create this vision. Now a desert carpet of 50,000 glass spheres changes color from ochre to deep violet, blue, and gentle white. Pick your own path through this swaying field of color. Rather than eclipsing nature, the solar lights create a soft background for Uluru. The pinpricks of light echo the stars in the night sky. Originally a temporary installation, Field of Light proved so popular it’s become permanent. Various packages are available — some even include Opera Australia performances.

3. During A Lawrence Of Arabia Moment

Camels are an integral part of Outback tourism, from camel races to the legendary Cable Beach sunset rides. Riding a camel is a magic carpet ride with the desert patterns of red earth and tufts of sage green beneath you. With a knee issue, my biggest concern was mounting the camel, but the cameleers made it easy. And it’s not like riding a horse. The creatures are conjoined in a peaceful rolling caravan with a cameleer leading. Uluru Camel Tours offer many options, but sunrise and sunset options with Uluru in the distance are breathtaking. A ride to the Field of Light is also an option.

4. By Riding Along On A Pushbike

Cycle the pathway around the base of Uluru enjoying the freedom to explore this iconic rock formation at your own pace. The 9.3-mile loop is easily accomplished in three hours with plenty of time to stop and explore. The ride is flat. There are a couple of sandy spots where you’ll simply disembark for a few minutes. Outback Cycle, where you can rent a bike, is just outside the Cultural Centre.

Exercise in the Outback is best tackled early in the morning. Bring water, sunglasses, and apply sunscreen. If you rent a bike, helmets are provided. Some people also wear face netting. Swallowing a bush fly at high speed is not an Australian rite of passage every tourist wants to experience.

If you have traveled this far to see Uluru, a helicopter ride will show you the elusive top. The least expensive option is the 15-minute ride but more extensive tours take in the 36 soaring domes of Kata Tjuta (The Olgas). With cobalt blue skies stretching as far as you can see and the rich red of these monoliths standing proud, the view is unforgettable. Sunset tours are the most popular, and the best viewing seat is next to the pilot.

6. Segway Around The Rock

It’s a 3.5-hour hike around Uluru. A Segway tour covers more ground in less time. Cruise past walkers doing the hard yards. Segways are easy to operate and don’t require a high fitness level. Instruction and helmets supplied. My tip for Segway riding is to stick with your own pace. Don’t feel you have to keep up with others should you choose to take it slowly, surely, and safely. There are various stops along the 2.5-hour tour, so you will be able to catch up if others charge ahead. During these stops, the knowledgeable guides fill tourists in on Uluru’s history and the indigenous culture. Various tour options are available. For Segway tours, those fly nets are a must.

7. Falling From The Sky

Some people write skydiving on their bucket lists. Age is no barrier. Al Blaschke made it into the Guinness Book of World Records when, at 103, he took his second tandem dive in July 2020. His first was when he was 100. When taking a trip of a lifetime, bucket-list items do come to mind. Tandem skydiving means jumping harnessed to a professional skydiving instructor. He/she opens the parachute. After the initial free-fall, there are four blissful minutes to fly like a bird in silence with views over Uluru, Kata-Tjuta, Lake Amadeus, and Mount Conner. Imagine the adrenaline high afterward. Skydive Uluru has a reputation for reassuring instructors. They only take two people up at a time. There are no age restrictions, though you should notify them if you are over 75 or have medical conditions.

8. While Watching Uluru Wake Up

If you have rented a car, you can watch this world-class sunrise from the parking lot (in Australia, this is called the car park). Pack a picnic breakfast. The lot will get crowded during tourist season, but there are a few short walks to find more space. These are wheelchair accessible. Alternatively, you can take the Desert Awakenings Tour. This small-group excursion leaves before dawn. It heads to a private sand dune where you experience the first rays of sunlight while tucking into an Australian breakfast of homemade damper (or soda bread) with golden syrup, bacon and egg rolls, pastries, fruit, and drinks. Afterward, the small bus heads for a close-up look at Uluru’s rock art and commentary on its significance. The 4×4 tour bus has a high floor that’s excellent for sightseeing, but the steps up are steep.

9. On An Iconic Motorbike

Sometimes holidays are about doing something totally out of character. Like donning leathers and heading off on the back on a throbbing, rumbling Harley. This is an exhilarating experience with the wind in your face and Uluru as your backdrop. Rides range from a 30-minute spin to a 60-minute base ride around Uluru. Safety equipment is supplied, and there is no age limit — just a sense of adventure and a free spirit. The guys that run the operation also take great photographs so you can have your Easy Rider moment immortalized. Book with Uluru Motorcycle Tours.

10. Viewed Against The Stars

With low humidity and minimal artificial light, the Red Centre is one of the best places in the world to see stars. There are a number of astro tours. Cast your gaze upward and learn of the Seven Sisters’ story — part of an Aboriginal songline that traverses the breadth of the continent. Learn how ancient cultures used the night sky for mythology, orientation, and to understand the seasons. You’ll also explore the night sky with telescopes and binoculars.

11. Dining Under The Southern Cross

How about dining under a canopy of millions of stars with Uluru as a backdrop? Tali Wiru pairs this unforgettable setting with world-class gastronomy. You are led to a secret location to watch the flaming sunset while eating canapes and sipping French champagne. Then it’s off to candle-lit tables in the middle of the desert for a four-course meal. Think Darling Downs wagyu beef fillet with a paperbark smoked onion puree and wild mushroom ragout, emu carpaccio, quandong pudding with five spices, and chocolate dessert with native plums and lemon myrtle. This is bush tucker with a French twist. Afterward, an astronomer points out constellations and planets as you sip cognac or wattle seed-infused hot chocolate before a campfire. Each course includes premium Australian wines. This is an expensive but memorable experience suitable for splurges or special occasions. Tali Wiru is limited to a maximum of 20 people. A less expensive option is the Sounds of Silence Dinner that caters to larger groups.

Longitude 131 is a luxurious wilderness resort near Uluru. There are also apartments, hotels, and simple camping sites. Most accommodation falls under Voyages Indigenous Tourism Australia Ayers Rock Resort. The resort employs Aboriginal and Torres Strait Islander Australians and operates a hospitality trainee program for young Indigenous Australians. Some lead the free tours on offer. Even if not staying at the resort, you are welcome to join, no reservations required. They include bush tucker talks, during which you can try items like lemon myrtle shortbread, and guided walks through native gardens. The culinary world of indigenous food is fascinating.

Pro Tips: Outback summers are scorchers, so plan accordingly. The tourist season is during Australia’s colder months, May to September.The shoulder seasons with fewer tourists are from March to May and October to the end of November. Download the Uluru Guide (PDF) for additional park information.

Editor’s Note: The information presented in the first paragraph of this article comes from the Australian Department of Agriculture, Water and the Environment and australia.com’s Guide to the Red Centre. 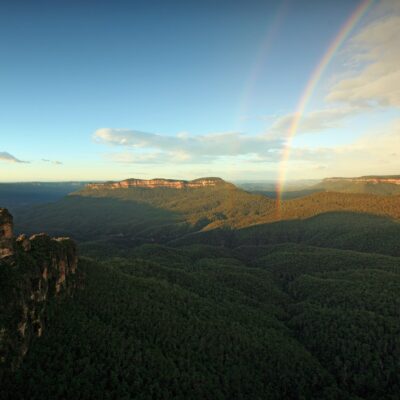