Our 8 Favorite International Cities To Visit During The Holidays

Ulrike Lemmin-Woolfrey
TravelAwaits' 2022 Best Of Travel Awards, presented by Medjet, showcases our readers' favorite destinations and businesses. Nominations took place in early March, and voting for the finalists ended in early May. We hope these picks inspire your future adventures; congrats to all of the winners!

When it comes to the holidays, Europe can (nearly) not be beaten as a look at the results of the TravelAwaits Best Of Awards shows: Seven of the eight top cities voted for are in Europe, with only one non-European winner.

The winning cities spread across Europe — and (spoiler alert) Canada, from down in the Alps right up in the north. Despite including two capital cities, they have this nearly Hallmark-type of small-town charm that is so important to get into the holiday mood.

Here is the list of the top eight cities in the world that our readers think offer the best all-around experience when it comes to visiting during the holidays.

There are two main things Salzburg is famous for: being the birthplace of Wolfgang Amadeus Mozart and the setting for the film The Sound of Music. Both facts draw visitors to the city year-round. But really, the main draws should be the charming city itself, with the castle sitting high above the baroque towers of the old town, the charming banks along and bridges across the river Salzach, and the most charming and bustling street in the city, the Getreidegasse, translated simply as “grain alley.” The size of this city is perfect for a weekend. With winter, it only gets better, especially when it snows, which it usually does.

The Salzburg Christkindlmarkt, or Christmas Market, on the main Residenzplatz square by the cathedral dates back to the 15th century and is as traditional as they come, with trumpet players, performances by angels, and big, fully-decked trees. The main market might not be one of the biggest markets in Europe, but that exactly makes up its charm.

Pro Tip: Salzburg is famous for its traditional Christmas decorations made from real eggs shells, making for fragile, but beautiful souvenirs.

The second-largest city in the Republic of Ireland after Dublin, Cork is — together with little Kinsale down the road — Ireland’s best-loved foodie city. Apart from the imposing City Goal, the Elizabeth Fort, and the lovely Crawford Municipal Art Gallery, three of the top attractions in Cork involve food and drink. There is the English Market, which has been going strong since 1788; the Franciscan Well Brewery, serving its craft beer in a vaulted pub; and a butter museum telling you everything about Ireland’s important export produce. Add twinkle lights, markets, carousels, and even a mini North Pole Express train, together with stalls brimming with gifts and the good food, and you are definitely onto a winner, or, to be more precise, this year’s runner-up.

Pro Tip: For a complete holiday package, stay at the Metropole Hotel, which offers Christmas dinners and whiskey tastings right in the heart of the old town.

When you talk about a perfect destination for the holidays, snow is pretty much a must, or at the very least an occurrence much longed for. In Quebec City, the snow in winter is generally a given, so that’s one box ticked.

Then there is the wish for a European-style charm that emanates from an old town center, preferably with a sturdy city wall surrounding it. Quebec City is the only walled city north of Mexico and has that old-world atmosphere in spades, with its quaint cobbled lanes lined with little Christmas trees, tiny shops, and in the holiday season, pretty lights and decorations.

All you need now is a traditional German-style Christmas Market and maybe another one or two, and you have a perfect holiday destination in a perfect setting. And Quebec City offers that as well. No need to even visit Europe when you have Quebec City nearby.

Pro Tip: If you are visiting just before Christmas, don’t miss a visit to the Boutique de Noël, which sells everything Christmassy and allows you to add to your store of decorations.

Probably the Christmas city, period, Strasbourg pulls out all the stops when it comes to the festive season. Not an alleyway or a window goes undecorated, not a square, however tiny, is without a twinkling tree, and the numerous markets are all filled with stalls, while the aromas that precede them fill the streets as you walk through the old town. Strasbourg itself is a lovely city to explore with a historic old quarter, great shopping, superb museums, and a cathedral that is truly amazing, but come Christmas, the town is literally transformed into a wonderland.

Pro Tip: With Strasbourg lying on the border between France and Germany, you can expect to get the best of both worlds when it comes to seasonal treats: plenty of mulled wine, pretzels, tarte flambée, gingerbread, and more.

Prague is not only one of the loveliest European capital cities and one of the most historic ones with plenty to see and do, but it also loves celebrating the holidays. There are three large Christmas Markets set up at the main squares, such as the Old Town Square, Wenceslas Square, and Prague Castle, but the city also boasts countless smaller ones at Republica Square, Kampa Island, and others. The Old Town is decorated everywhere, which the small lanes sparkling with lights, and food stalls offering traditional Czech treats, such as spit-roasted hams, spiced sausages, garlicky flatbread with cheese, meat dumplings, and all sorts of sweet treats, plus beer — even spiced and heated beer, to wash it all down with.

Pro Tip: If you arrive in late November, try and catch the seasonal Nutcracker ballet at the National Theater.

Bergen is not only one of the readers’ favorite cities for the holidays but was also voted into the top spot by our travel experts when it comes to favorite winter destinations. Despite being Norway’s second-largest city, the old town is quaint, with colorful houses along the harborside, and a magical, mountainous setting.

Pro Tip: Even if you can’t make it to Bergen at Christmas time, that doesn’t mean you have to miss out on the cute Norwegian Christmas decorations, especially those Nisse Santas with their red hats and big noses. Head to the all-year-round Christmas shop Julehuset when you’re in town.

One of Germany’s most famous and largest Christmas Markets takes place in the heart of old Nuremberg, below the Frauenkirche cathedral on the Hauptmarkt, the main square. While open all day, the market comes into its own at night, leaving you the day to explore historic Nuremberg’s many attractions, working up an appetite for those famous Nuremberger Rostbratwurstchen, small herby pork sausages that usually come in threes.

Walking around the cathedral, there are more markets, and each corner has something special — traditional wooden decorations, food, and drink, and even the locally famous Feuerzangenbowle, which involves a cone-shaped sugarloaf and a lot of rum, all set alight. It certainly warms you up.

Pro Tip: Each year, the mulled wine is served in special mugs which you are allowed to take home, as the price includes a deposit, which will be returned if you return the mug. If, that is.

Snow, a quaint small town sparkling with decorations, a spectacular setting, and some unusual traditions make Reykjavik, Europe’s northernmost capital city, a perfect destination for the holidays. Then, consider that Christmas lasts for 26 days in Iceland — from December 11 until January 6 — and that there is not just one, but 13 Santa Clauses. And you might just be lucky and get to see the northern lights on nights you find yourself outside of the city limits. To combine the best of Christmas and Iceland’s natural wonders, there are packages and tours that offer you the sights, as well as traditional Christmas dinner.

Pro Tip: Catch a Christmas concert at Harpa, the super modern concert hall in Reykjavik, for a special treat. 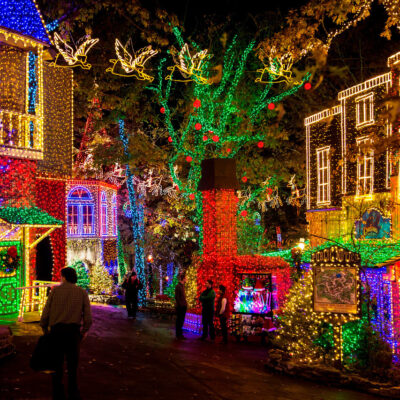 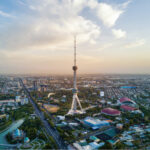 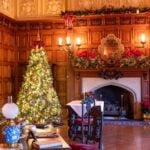