Germany is the country that invented Christmas markets and, incidentally, Christmas trees, even though they came into the tradition much later. Having contributed two such important components to the world’s holiday traditions, they should know how to do Christmas properly.

Here are nine fantastic Christmas markets to visit if you find yourself in Germany during the holiday season.

The Nuremberg Christkindlesmarkt is probably the best-known Christmas market in Germany. The name comes from the Christkindl, or Christ child, who is not actually the Baby Jesus but a winged fairy-like creature who is said to bring children their presents on Christmas Eve. The Christkindl is a southern German tradition; in the north, Father Christmas is the one who brings presents.

Nuremberg, the state of Bavaria’s second-largest city, is famous for its small rostbratwurstchen, or herby grilled sausages, and this is what the market does best. The setting on the old market square is spectacular, the huts stand closely packed, and the arts and crafts displays are fabulous, but until you’ve had a mug of mulled wine with a platter full of small sausages, you haven’t really enjoyed this market.

The spectacular opening ceremony featuring an appearance by the Christkindl always takes place on the Friday before the First Sunday of Advent.

Cologne, the 2,000-year-old city on the Rhine in the state of North Rhine-Westphalia, has many attractions to draw visitors, but it is especially attractive around Christmastime. The most famous and largest Christmas market in the city is the Christmas Market at Cologne Cathedral, right in front of the city’s imposing cathedral.

You can’t go wrong with that classic market, but I actually prefer the smaller market near the town hall. It centers on the Heinzelmannchen, little gnome-like creatures that, according to local folklore, live in Cologne and help around the house and workplace in the middle of the night. You can get the cutest gnome souvenirs to bring home!

No matter which market you choose, be sure to try the handbrot, freshly baked bread stuffed with cheese, ham, and mushrooms. It pairs perfectly with mulled wine!

The city of Dresden, the capital of the eastern state of Saxony, is home to the oldest Christmas market in Germany, dating to 1434. You can feel the tradition as you walk through this Christmas town, with 240-odd chalets selling local food and drink. Look for the amazing wooden Christmas decorations from the Ore Mountains, including turning candlelit Christmas pyramids and little woodmen with incense coming from their mouths.

Be sure to give yourself adequate time to explore this vast market, and don’t forget to try a feuerzangenbowle, a traditional German alcoholic beverage for which a rum-soaked sugarloaf is set alight. The melted rum-infused sugar is then added to glasses or mulled wine for extra flavor.

The northern city of Hamburg is my hometown, so I must admit to having a soft spot for this particular market. But homesickness bias aside, the Hamburger Weihnachtsmarkt in the heart of the city really is a lovely Christmas market. Taking over the square in front of the grand late-1800s town hall with its spire and green copper roof, and nestled by the Kleine Alster canal with its colonnaded old-fashioned shops and coffeehouses, it has holiday spirit in spades.

There are the typical arts-and-crafts stalls, mulled wine stands, sausage-sizzling places, and gingerbread cookies, of course. But my favorite stall is also the largest of the lot: a veritable wooden cabin filled with Christmas decorations — most made from wood, glass, or tin, and all superbly finished.

Pro Tip: Just a short distance away on Gerhart Hauptmann Platz is another Christmas market that complements this one perfectly.

Historic Aachen, bordering Belgium and the Netherlands, was the residence of Charlemagne and the city where Roman emperors and German kings were once crowned. Not only is it cosmopolitan and historic, but it is also stunning and home to Aachener Printen, Germany’s most famous gingerbread, perfect at Christmas and all year round.

The Aachen Christmas Market is backed by the town hall and the UNESCO World Heritage-listed cathedral where Charlemagne is buried, and, while it’s not large, it boasts a festive atmosphere. The scent of gingerbread mingles with the aromas of hot chocolate with whipped cream, mulled wine, and local specialties such as flammkuchen, a type of pizza, and eierpunsch, a local take on eggnog.

Pro Tip: While you’re in Aachen, take time to visit a spa. Aachen is a spa town — it was its waters that attracted the Romans in the first place.

For a spectacular setting away from market squares and town halls, head to the Ravenna Gorge Christmas Market in Breitnau-Hollsteig. It’s situated in a gorge spanned by the Hollentalbahn, or Hell Valley Railway Viaduct, in the Black Forest. It is a small market with some 40 huts, but it offers everything you’d expect from a German Christmas market: food, drink, and arts and crafts.

The setting is the main attraction, however. At night, the 190-foot arches of the viaduct are lit up and — this being the Black Forest — snow is a distinct possibility. With the huts nestled on the side of the gorge, the romance is hard to beat.

To get to this hidden gem of a place, you can take the regional train from Freiburg to either Himmelreich or Hinterzarten, from which a shuttle bus will take you to the market.

This medieval Hanseatic harbor town near the Baltic Sea is not only a UNESCO World Heritage site but also the home of marzipan, so there’s really no place better suited for a Christmas market.

The city’s largest and most traditional Christmas market is located on the cobbled square in front of the town hall, steps away from the chunky former city gate that is both the emblem of the city and the emblem of the famous Niederegger marzipan company. The Café Niederegger is the perfect place to relax over a hot chocolate and a side of marzipan cake after a visit to the Christmas market.

Pro Tip: There is also a small craft market inside the 800-year-old Saint Peter’s Church, and you can climb to the top of the spire and take in all the Christmas lights in the city from above. You will only have to climb 54 steps; once you make it up them, you’ll take a lift the rest of the way to the top.

Goslar is a small town in the state of Lower Saxony. It’s located in the Harz Mountains, said to be home to witches who celebrate each spring during the Walpurgisnacht. The Goslar Christmas Market is enchanting, as only small, medieval market squares can be when they are dressed up with twinkle lights and filled with chalets selling delectable things to eat and drink.

What makes the Goslar market different from others, though, is that another square in the old city center is turned into a magical Christmas forest, filled with lights and places to sit and enjoy the enchanting surroundings. Why have only one Christmas tree if you could have 60, after all?

Pro Tip: Be sure to visit the tin figure museum on the riverside for a look at Goslar’s 1,000-year history. You can even cast your own little souvenir.

Augsburg, a city in Swabia in the southern state of Bavaria, is a mere 35 miles from the city of Munich. The large, 500-year-old Augsburger Christkindlesmarkt is atmospheric, with plenty of stalls selling Bavarian specialties, punch, mulled wine, and traditional arts and crafts.

That’s nothing out of the ordinary, but this Christmas market pulls out all the stops on Friday, Saturday, and Sunday evenings. Come 6 p.m., the historic town hall is transformed into a gigantic Advent calendar, with 24 glittering angels appearing in the doors and windows playing traditional Christmas music.

The Augsburger Domsingknaben Choir, a famous boys’ choir, performs throughout the month in the Golden Hall of the town hall. Visit this page for details and tickets.

These are my favorite Christmas markets for atmosphere, food specialties, and history. But quite honestly, if you are traveling to Germany before Christmas, you will find a nice market offering food, mulled wine, and Christmas knickknacks wherever you go. The whole country rejoices at this time of year.

Pro Tip: Germans generally stay home to celebrate on Christmas Eve, so your last day full day to shop will likely be December 23. Check the hours of your intended market in advance, especially if your visit is very close to Christmas. 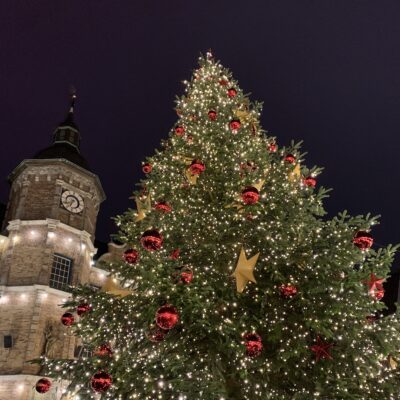 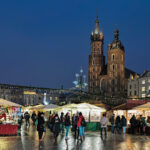