5 Amazing Lighthouses To Visit From Key West To Pensacola

As author and U.S. Lighthouse Society board member Elinor DeWire once said, “There’s a human story at every lighthouse.”

So true. Every lighthouse, including those that dot the Florida Gulf Coast, has a story just waiting to be told.

Lighthouses are reminders of our maritime past, when schooners would sail the oceans delivering passengers and cargo to destinations, battling nature’s fury and treacherous coastlines. The beauty of their towering heights and the stories they tell give people hope and inspiration to better themselves and be a beacon for others.

I’ve traveled the Florida Gulf Coast many times and have made sure that whenever possible I visit one of these beacons of the night. Let me introduce you to five of my favorites. After reading my reasons for these lighthouses topping my list, I think you will agree that they are all must-sees. While you can’t climb to the top of some of these 150-plus-year-old towers, a visit is well worth your time.

Remember that any fees charged for tours or museum admission are used to help protect and preserve these structures.

The islands are surrounded by the most beautiful blue gulf water, coral reefs alive with color and wildlife, and gleaming white sand beaches that offer an amazing array of activities for all.

Loggerhead Key is located 70 miles due west of Key West on the largest of the key’s seven islands. The lighthouse was completed in 1857 and stands 150 feet tall. The interior of the lighthouse is closed to the public but still, it is an impressive sight in one of the most enchanting locations.

Garden Key is actually located on one of the bastions of historic Fort Jefferson, a 19th-century masonry fort built to protect the Gulf States from foreign invasion following the War of 1812.

Pro Tips: Wade The Water To Loggerhead And Garden Keys

Here’s the rub — you can only get to the islands by ferry, but what an experience you will have! There is snorkeling among the vibrant colors of fish and coral in Little Africa and scuba diving to the Windjammer Wreck.

The park is open year-round from sunrise to sunset. Book passage aboard the Yankee Freedom to visit Loggerhead Key, tour Fort Jefferson, and have an incredible camping experience under one of the most beautiful starry skies anywhere on Garden Key.

Heading north to the Fort Myers area, we take the Sanibel Causeway across San Carlos Bay to Sanibel Island and the lighthouse of the same name.

The Sanibel Lighthouse was the first Florida Gulf Coast lighthouse built north of Key West and is an iron skeletal frame with spindly legs that surround an enclosed cylindrical base. The base that supports the light is painted a dark utilitarian brown to make it more visible from sea during the day.

Pro Tips: Make A Day Out Of Sanibel Island

The lighthouse is located on the eastern tip of the island in the aptly named Lighthouse Beach Park. While you can’t climb to the top, you are still in for a treat swimming in the blue Gulf waters, sunning on the beach, or surfing or pier fishing.

The island is also known worldwide as a shell collector’s paradise.

Parking is limited so get there early, and is $5 an hour. The causeway toll to reach the island is $6.

The narrow barrier island known as Gasparilla Island is where we find not one but two lighthouses.

The first is the Gasparilla Island Lighthouse. Built in 1881, the steel structure was built in pieces by the Phoenix Iron Company of Trenton, New Jersey, then shipped to the island for assembly.

The completed structure stands 100 feet tall and let me tell you, the islanders who live in Boca Grande love their lighthouse. Visitors can climb the tower on special event days and it is decorated with colorful lights during the Christmas holidays.

Heading south about 2 miles on Gulf Boulevard, we come to Gasparilla State Park, the home of the quaint Port Boca Grande Lighthouse and Museum.

The square wooden building that surrounds the lighthouse was built on iron pilings. The lighthouse itself protrudes from its roof to a height of 44 feet.

For a schedule of special events such as climbing the Gasparilla Island Lighthouse, visit the Barrier Island Park Society website for dates.

The Port Boca Grande Lighthouse is still closed due to the pandemic but hopefully will reopen soon. Still, make plans to visit the park. The view of the lighthouse is stunning against the blue Gulf backdrop and the museum is a fascinating trip back in time.

On the eastern edge of what is known as Florida’s Forgotten Coast, due to it being relatively undeveloped, the second oldest lighthouse in the state and the oldest on the Gulf Coast, St. Marks Lighthouse, stands stoically protecting mariners from crashing into the shoreline.

Construction started in 1829 and was completed in 1831. Later in 1842, its 2-foot-thick walls were increased in height and now tower 82 feet above the northern gulf waters. It is the only lighthouse in Florida with wooden stairs leading to the top.

It is one tenacious structure. During its lifetime, it has survived over 100 hurricanes and the Confederate army during the Civil War, who tried to blow it up to keep it out of the hands of Union troops but were unsuccessful.

St. Marks is the most photographed lighthouse in the state and while the public can’t currently climb to the top, you can get some incredible photographs. It is located at the St. Marks National Wildlife Refuge where there are also some great hiking trails. The refuge is open from 6 a.m. to sunset.

Be sure to stop at the visitor center when you arrive to get an overview of the refuge, the lighthouse, and information on the short hiking trails within the park. And pick up some bug spray; mosquitoes and yellow flies can be intense in the summer.

Built in 1859, the Pensacola Lighthouse and Museum is still an active U.S. Coast Guard navigation aid.

The lighthouse stands 151 feet tall with an ornate spiral staircase of 177 steps that hugs the interior wall and leads to spectacular views of Pensacola Bay, historic Fort Pickens, and the Gulf of Mexico beyond.

The keeper’s quarters, with its enormous wrap around porch, was built 10 years after the lighthouse and has since been transformed into a fascinating museum with artifacts from past lighthouse keepers. It also showcases the history of the U.S. Coast Guard, including the women’s branch, SPARS (“Semper Paratus — Always Ready”), during World War II.

Naval Air Station (NAS) Pensacola is the home of the Navy’s Blue Angels flying team. The lighthouse offers spectacular views of the Blues during their practice runs where they fly over 600 miles per hour between the lighthouse and the base’s water towers which are only 1,000 feet apart! Tickets to view the Blues from this vantage point are extremely limited.

For various reasons, NAS Pensacola has been closed to civilians. The only way you can visit the lighthouse and museum is by reserving a seat on a public access tour bus. There are also beautiful sunrise and full moon tours, and a special ghost hunting tour. The SciFi channel’s Ghost Hunters visited the lighthouse for one episode and are convinced there are ghosts there.

A little secret that tour guides will tell you after walking up the tower is that the steps are not your standard 7-inch height but 9 inches, giving you more of a workout.

Editor’s Note: If you want to learn more about Elinor DeWire and the United States Lighthouse Association, check out their official website.

Look deeper into the beautiful destinations on this lighthouse journey: 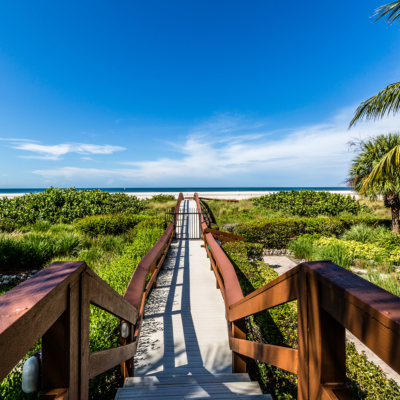 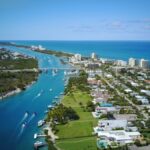 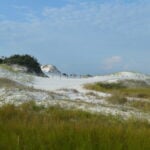 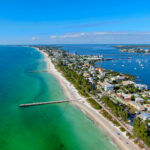