The nation’s most famous destination for seashell-seeking, Sanibel and Captiva Islands on Florida’s Southwest Gulf Coast offer a buffet of beaches that reaches far beyond its famed pastime, glibly dubbed the Sanibel Stoop and Captiva Crouch.

I know; I live here. And I get to the beach whenever possible.

I long ago stopped scooping up handfuls of shells every time I walk the beach, however. Now, I pick up only one when I want to remember a special occasion or beach highlight. More likely, when at the beach, I’m pursuing a different activity, and I choose a certain beach specifically for its attributes and how it relates to that activity. Because I’m a resident, I usually choose the so-called “resident sticker beaches” when I just want to chill. More about that later. But if I’m taking my son surfing or looking for a sunset celebration, I have other picks.

With some 20 miles of sandy shores on both islands, which are connected to each by a short bridge at the Blind Pass Beach, Sanibel and Captiva make selecting the right access a choice best left up to local knowledge. So, here I am, to offer you my beach-picking wisdom gleaned from 4 decades spent on — in my opinion — Florida’s best beach islands. Check out the city’s map of Sanibel municipal parks for help with pinpointing locations.

Note: Most beaches charge a parking fee of $5 an hour.

The Beach At Island Inn

So, let’s get right to it. Where is the best shelling on Sanibel Island? As I like to answer that question: the beach where you are. The stretches of sugar sand up and down the islands collect mounds of seashells no matter where you go.

Of course, fewer people at the beach make for less shelling competition, but at low tide, seashells abound on every gulf-side beach on Sanibel Island especially, Captiva to a lesser degree. Because the island’s south end takes an uncommon east-west turn, it more efficiently scoops up imports from southern seas.

All that said, I have a secret to share, and it’s called the beach at Island Inn, a historic Sanibel resort. What’s so special there? It’s where the Bailey-Matthews National Shell Museum on Sanibel conducts its daily, hour-long Beach Walk tours ($7–$15 each, advance reservations required). So, you get an expert lesson with your pluckable treasures.

Pro Tip: If you’re not a guest or paid Beach Walk participant, you can still access resort beaches by foot or bike. Although access and parking may be privately owned, all beaches on the islands are public.

Because of Sanibel Island’s twisted profile, it’s one of very few (if any) Florida islands from where you can get a good waterfront view of both sunrise and sunset from a beach. The east-end beaches have the best perspective of the sun rising behind Fort Myers Beach in the distance to the south. A few of our eastern-lying “resident sticker beaches,” such as the one at the end of Donax Street, are light on crowds and good for best enjoying your morning coffee with a sun salutation. Vehicular parking is restricted to those who live here. Purchase an annual car sticker. Pedestrians and cyclists alike can use the Donax access free of charge; something of a local secret.

Pro Tip: Sticker beaches lack restrooms and any other facilities, so plan accordingly.

3. Best For Birding And Nature

The most eastern of the east-end beaches is open to the public and one of Sanibel’s most popular. Lighthouse Beach Park features its eponymous circa-1880s structure, plus more amenities than most other island beaches. Birders-in-the-know have figured out that its end-of-the-island position makes it a rest stop for birds making landfall from long overseas flights. Especially in the fall and spring, the fallout — when birds literally fall to the beach, spent from their journey — of warblers draw the binocs crowd in flocks. Part of the Great Florida Birding & Wildlife Trail, it’s also a good place to spot raptors overhead and shorebirds on the beach; plus rabbits, gopher tortoises, and other land fauna along the nature trail. The trail travels from gulf side to bay side, where a fishing pier attracts a different breed of wildlife seekers. In summer, mammoth sea turtles and tiny plover birds nest on the gulf-front beach; volunteers rope off and monitor the nests.

The causeway onto Sanibel Island fills, especially on weekends, with folks spending the day picnicking, barbecuing, fishing, swimming, kayaking, and partying. Along Causeway Islands Park, the ease of parking as close to the sands as possible makes setting up camp and laying out spreads on the picnic tables ultra-convenient. The beach lines two islands in San Carlos Bay on both sides of the causeway road. It’s also a popular spot for windsurfing and kiteboarding.

Pro Tip: Causeway Islands Park is undergoing a restoration and beautification project now through June 2024. Parts of the parks will close intermittently, but one side of the road or the other will be open for recreation throughout the project.

Another resident beach (go by foot or bike if you don’t have a sticker), Bayview Park lies on the leeward side of Sanibel Island. There’s something so satisfying about pausing at this relatively unknown beach access and watching the traffic on the Sanibel Causeway as you relax worry-free in the sun, lulled by gently lapping waves.

The passes at the ends and between the two islands get the attention of adventure beachgoers because of their swift-moving waters. The currents flush fish out into the gulf and help build waves. Turner Beach, between Sanibel and Captiva islands, is the hottest of hot spots for both fishing and surfing. Anglers line up along the Blind Pass Bridge daylong and also cast from the shore. Surfers hit the beach when storms bring the best breakers. The parking lot is small, so arrive early and avoid sunset time, which is the busiest.

To avoid tricky pass currents, pick a mid-island park like Tarpon Bay Beach on Sanibel for the safest swimming. The bottom slopes gently here — another bonus. The parking lot for this beach is a bit of a hike, but you can drop off passengers and gear near the sand before you park.

Pro Tip: Besides the causeway beaches, this is the best place for RVers to park and beach.

Another mid-island beach, Gulfside City Park also provides safe swimming conditions for little ones, plus some other bonuses for families. Tables and a pavilion provide picnic spots, and trails take you off the beach to explore local fauna and a historic pioneer cemetery. Close to the parking lot, an exhibit interprets seashells, sea turtle nests, and other beach nature. Locals refer to this park as Algiers Beach, because an eponymous historic paddlewheel boat once beached there as a seaside home.

9. Best For Getting In Your Steps

Sanibel Island offers a full day of walking with its 15-plus miles of mostly unbroken beach. Bowman’s Beach at the island’s north end provides the best access for shifting your beach stroll into high gear. For starters, the Gulf of Mexico lies a good 600 steps from the parking lot, across three bridges and an estuary. Also, before you get to the actual beach, you come across other trails, including a fitness trail with workout stations. Once you do reach the gulf, turn either left, to hoof it down toward Tarpon Bay Beach, or right, for a shorter walk to Blind Pass. Either direction you take, the scenery is 100 percent natural and unobscured by the homes and resorts on other beaches.

Newly reopened in November 2021 after a more than $18 million project to widen the beach with more sand, Alison Hagerup Beach Park still inspires hand-holding, smooching, and vows of eternal love. The parking lot and access lie at the doorstep to exclusive, gated South Seas Island Resort on the north end of Captiva Island. It faces due west, so relative isolation and Instagram sunsets contribute to the romantic value. You feel deliciously cut off from the rest of the world once you cross the bridge onto Captiva. Gated homes with names like Hakuna Matata and Lazy Dayz sit shrouded by vegetation along the twisty road leading to a picturesque stretch that runs seaside. Just past quirky Captiva’s small commercial core, Alison Hagerup, formerly known as just Captiva Beach, is the place to take twosome selfies and look for the green flash as the sun tips over the horizon.

South of Alison Hagerup, the beach at the legendary Mucky Duck restaurant has the same straight-on sunset views, but something equally important for end-of-the-day toasting: food and drink. A potent island tradition for more than 35 years, “The Duck,” as locals call it, parodies a British pub atmosphere, but with a second bar and extra seating outdoors facing the gulf. Live music often adds to the festive feel.

Pro Tip: The Mucky Duck parking lot is for customers only, so at least plan for drinks on the patios. At sunset time, you can also order appetizers from the patio on a self-serve basis.

For more information on beach activities in Florida, visit these articles: 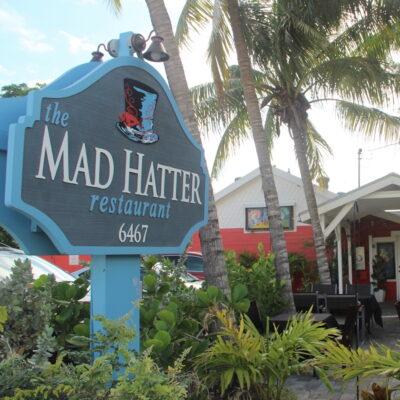 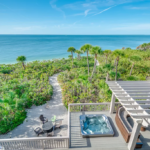 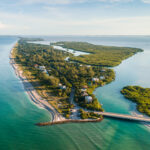 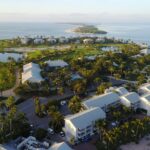