My 11 Favorite Florida Beaches To Avoid The Crowds

Florida is known for its beaches, and with over 1,300 miles of coastline, there are plenty to pick from. But sometimes, even with all that coastline, it’s hard to find a place for a little quiet day at the beach. Florida has a population of over 22 million people, plus millions of tourists who visit every year. Many of our beaches can get pretty crowded.

In many cases, just finding a place to park near the beach is a chore. And then once you get on the beach, you find that hundreds of other people had the same idea. I don’t like beach crowds and have traveled all over Florida to find the best secluded beach spots. Spring Break and holiday weekends bring out the crowds just about everywhere, but here’s a list of a dozen beaches, and two bonus beaches, where you have a chance at a little sand-dune solitude.

The Canaveral National Seashore is a 40-mile stretch of undeveloped Atlantic Coast beach that runs from the Kennedy Space Center north to New Smyrna Beach. There’s a northern entrance at New Smyrna Beach and a southern entrance in Titusville. There are only 193 parking spaces at the north end of the park, and 1,100 spaces at the south end. Holiday weekends draw a crowd, and sometimes the parking lots fill up. But for the most part, you can find a little privacy if you walk a short distance from the beach-accessible boardwalks. During the week, chances are you will have the beach almost all to yourself. If you are into beach hikes, the central part of the seashore is undeveloped, with no roads. Hiking into that area gets you totally alone, with just you, the seabirds, and the occasional coyote.

This beach is located south of Cocoa Beach. There are six parking lots, and generally the two lots on the north end, in South Patrick Shores, draw the smallest crowds. Even on summer weekends, you can usually find a patch of sand to call your own. Along the same stretch of beach is Patrick Space Force Base, with beaches open to the public. Just a note of caution: These beaches are not very wide and a lot of beach disappears during high tide.

Located on the Florida Keys (Big Pine Key specifically), south of Marathon and the Seven Mile Bridge, beach goers at Bahia Honda State Park are mostly campers from the park campgrounds. I’ve been there twice and had the beach pretty much to myself both times. This is a great beach for small children because offshore reefs calm the waves, and the water is shallow for a good distance out from the shore.

Sunset Beach is located on the south end of Treasure Island, a beach community at St. Petersburg. It is used mainly by the local residents. The white sand beach is stunningly beautiful and the Gulf of Mexico waters are normally less wavy than beaches on the Atlantic side of the state. While the crowds are small, so is the public parking. There are only two parking lots that fill up fast on the weekends. During the week, you often have the place to yourself.

This is a Miami-Dade park on Key Biscayne, the south end of Miami. There’s lots of parking, and plenty of beach, almost 2 miles of it. I’ve only been there twice, both times during the week, and the beach was deserted. The weekends get busy, but this is a big park with lots of beach for everyone. Sunrise here is a glorious display of red and orange colors framed by the coconut palms that line the beach.

Located in Port St. Joe, this could be my favorite beach in all of Florida. Its remote location on the Florida panhandle keeps crowds sparse at St. Joseph Peninsula State Park. Sugar white sand and towering sand dunes make for natural beauty. At one point, it was named the best beach in the country by the famed Dr. Beach. The only problem is most of the park, including the campgrounds, remains closed while it is being rebuilt in the aftermath of Hurricane Michael in 2018. Only a small section of the beach is open for day use at this time. Park officials are targeting 2023 for reopening the entire park.

Beautiful beaches don’t come any better than the white sands of this national seashore in Gulf Breeze on Florida’s panhandle. Stretching from Pensacola to Navarre, the Gulf Islands National Seashore is more than 26 miles long. There are a couple of access parks with parking and showers. Other than that, it’s just pristine sand and stunningly beautiful blue and turquoise water. People park along the road at random and stake out their own beach front with rarely anyone else in sight.

Located across the causeway from Fort Myers, Sanibel-Captiva is known for its beaches and shelling. Captiva Island is at the end of the island chain and beaches are pretty much used mainly by guests at island hotels. There are three public beaches, with restrooms. Your day at the beach can be a little costly. There is a $9 toll on the causeway for non-locals and parking at the beaches is $5 per hour.

Anna Maria Island sits off the coast from Bradenton. There are three communities on the island and the least crowded beaches are found at the north end. The beaches on the Gulf of Mexico are wide and white, and I’ve never seen them crowded, even on a holiday weekend. Most beach goers here are local residents or guests at hotels and bed & breakfasts on the island. The problem here is parking. There are no public parking lots by the beach.

Sebastian Inlet State Park at Melbourne Beach is located north of Vero Beach and is divided by a channel from the Atlantic Ocean and a bridge. Of the north and south beaches, the south is the least crowded. There are no restrooms or structures of any kind. Parking is at pull-offs along Highway A1A with no parking lots. I have been here a number of times and have never seen more than a handful of people on the beach. Access to the south beach is free.

Located on the Atlantic Coast, north of Daytona Beach, Flagler Beach isn’t all that remote, but few people use the beach here — mainly local residents. You park along the highway and there are plenty of dune crosswalks. The sand isn’t the prettiest, but there’s lots of it. There are restaurants and convenience stores along the road, but no public facilities or restrooms.

It might not be fair to include these two bonus beaches, because they are not readily accessible. But their lack of access makes up for a lack of crowds.

Anclote Key is a small island offshore from Tarpon Springs, in the Gulf of Mexico. You can only get there by boat or kayak, and the kayak paddle is a long and arduous trip through open water. But once you get to the island, you are usually totally alone. There is a wild beach with lots of birds, and only occasionally will you run into other people.

Dry Tortugas National Park is one of the least visited parks in the National Park System that’s in the lower 48 states. Located 70 miles southwest of Key West, you only get there by boat or a chartered seaplane. Most people are day trippers who arrive by ferry from Key West. If you are one of the hearty souls who opt to camp out on the island, you will find yourself pretty much alone after the ferry leaves in the afternoon. The beaches are the only part of the attraction here. Visitors spend a lot of time touring historic Fort Jefferson, which was built in the mid-1800s.

Florida’s beaches are right up there with the best beaches in the world. Some get very crowded — like South Beach in Miami, Daytona Beach on the Atlantic Coast, and Clearwater Beach on the Gulf of Mexico. And even those places have smaller crowds on weekdays. But with a little adventure in your heart, you will find the beaches in this article are your best bet for getting away from the maddening crowds. Grab that beach chair, don’t forget the sun block, and find yourself a sandy piece of paradise. 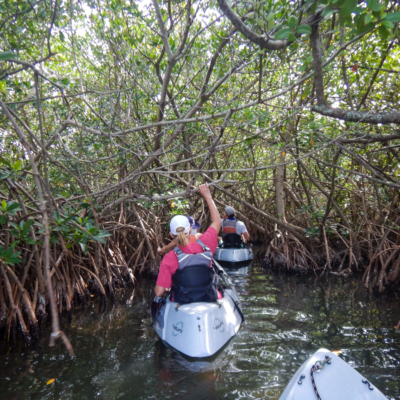 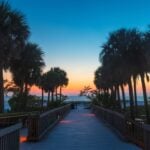