Originally called Bjorgvin, the city of Bergen was founded by King Olaf III Haraldsson in 1070. Today, modern Bergen is known as the gateway to the fjords. One of the most beautiful cities in Norway, Bergen is a mix of old-world charms and a thriving metropolis.

The mountains surrounding Bergen are responsible for the micro-climate that produces over 195 days of rainfall per year. And yes, it rained while we were there. Bergen was the last port on our Norwegian Homelands Cruise, so we made the most of our time there, even in the rain.

In the historical district of Bryggen Wharf, parallel rows of small, vibrantly painted buildings flank narrow wooden walkways, once the homes and warehouses of past merchants, today a UNESCO World Heritage Site.

Home to Bergen’s only Hanseatic League trading enclave in existence, these 62 distinctive structures are the only thing left after numerous fires that have ravaged Bergen since the 18th century. Bryggen is a historical window into Norway’s maritime legacy and architectural traditions.

Haakon’s Hall was a medieval stone castle built as a royal residence and banquet hall, constructed in the middle of the 13th century during the reign of King Hakon Hakonsson (1217-1263). This massive stone hall, the most prominent royal palace building in Bergen, was near where our Viking Venus ship docked at Bergen’s harbor.

The castle governor Erik Rosenkrantz constructed the stark grey Rosenkrantz Tower next to Haakon’s Hall in the 16th century. The five-story building served as a fortified royal residence in the political center of Bergen. Descend the narrow stone steps to the basement chambers and former dungeon, or climb the narrow staircase to the top for great city views.

The National Theatre is the oldest and largest permanent theatre in Norway. Opened in 1850 under the name Del Norske Theater, the hall originates back to the founding initiative of the Norwegian violinist Ole Bull.

Created to develop Norwegian playwrights, Henrik Ibsen was one of the theatre’s first writers-in-residence and art directors. In 2001, the building was restored and today houses three stages presenting up to 20 productions annually.

5. The Hanseatic Museum And Schotstuene

The Hanseatic merchants from Northern Germany sailed into Bergen in the 13th century, exchanging grain for stockfish from Northern Norway, making Bergen one of Northern Europe’s most important trading hubs for centuries. Today, the Hanseatic Museum and the Schotstuene, the last Hanseatic assembly room in the world, have been part of UNESCO’s World Heritage Site since 1979.

Explore Hanseatic merchants’ lives, their unique trading network, and the culture and economic significance amid the collection of 62 preserved buildings. The Schotstuene assembly rooms are beside St. Mary’s Church, the Hanseatic Merchants’ main church.

Nordnes is a peninsula and neighborhood in the city center of Bergen, with several clusters of wooden houses and narrow alleys. You’ll find the Bergen Aquarium on the tip of the peninsula. The parish church Nykirken, the Norwegian Institute of Marine Research, and Frederiksberg Fortress are on Nordnes.

Take the 2-hour unique walking tour of Nordnes to see the homes of wealthy Norwegian merchants of the Hanseatic League of Bryggen. At the end of the peninsula, a monument commemorates the site of Bergen’s witchcraft trials. On the other side of Nordnes, a working-class sailor’s district grew, with beer pubs in hidden alleys and over 300 small inns. Be ready to walk on cobblestone streets and stairs leading down steep hills.

Take the 6-minute funicular railway trip to the top of Mount Floyen for spectacular views of the surrounding vistas of Bergen. Check out the Floistuen Shop and Café for coffee, hot chocolate, a cold drink, and a freshly baked pastry. Shop for candles, unique gifts, and more.

Walk 10 minutes from the top of Mount Floyen for free canoeing and paddle board rentals all summer at Skomakerdiket Lake. Rent mountain bikes for scenic views of Bergen, or hike the mysterious troll forest in the evenings since the sun turns them into stone. Rain or fog makes the troll experience more exciting.

We enjoyed a taste of Norwegian farm life when we visited Ovre Eide, situated on the shores of beautiful Jordal Lake. Surrounded by green fields and majestic scenery, we walked up the drive with our umbrellas in the light rain to see the Norwegian fjord horses and Norwegian spel sheep and learn about the farm’s history.

In the beautiful main house, we were seated at long family-style tables and enjoyed homemade almond pralines, pastries with berries and cream, fresh juices, coffee, tea, and hot chocolate. The owner and family joined us dressed in traditional native bonad attire for musical entertainment.

Located on Edvard Griegs’ square in Bergen, Grieg Hall is a 1,500-seat concert hall named for Bergen-born composer Edvard Grieg, who served as music director of the Bergen Philharmonic Orchestra from 1880 to 1882. The beehives on the roof and the honey production have become a symbol of serious sustainability.

Before the Grieg concert at Troldhaugen, you will explore Edvard and his wife Nina’s home, which Edvard built as a summer home where they lived for 22 years. Edvard is probably Norway’s most famous composer, and his wife Nina, a celebrated soprano, fell in love and were engaged in 1865. He gave her four songs with lyrics by his good friend Hans Christian Andersen, including the song, I Love You. They married in 1867. You’ll learn more about their life together and enjoy the Grieg piano concert afterward.

The old Fantoft Stave Church was built in Fortun in 1170 and moved to Fantoft in 1883. The church, made from the timber of 350- to 400-year-old pine trees, is open for visitors during summer, rebuilt after a fire in 1992. The only remaining objects from the original church are the wish stone, placed inside the wall, and the cross at the altar.

Enjoy a guided tour of the Dale Museum, where Dale’s official Olympic and World Championship sweaters are made and sold. A collection of these sweaters from 1956 to the present are on display. The factory has operated since 1879, surviving devastating fires, two world wars, floods, a depression, and several pandemics. In 1967, the factory started machine knitting the sweaters. Before that, Norwegian homemakers from across the country hand-knitted the sweaters.

Soar over the stunning snow-capped mountains, the beautiful fjords, and the fantastic Folgefonna, one of the largest glaciers in Norway, via a Cessna four-seater seaplane or a helicopter. You’ll see the Hardangerfjord, the world’s fifth longest fjord known as the Queen of the fjords, icy blue glacier lakes, the mighty Mount Ulriken, and the city of Bergen. Take in the remarkable Hardanger Bridge, a suspension bridge that forms part of the route from Bergen to Olso.

For over 150 years, Arven has handcrafted unique gold and silver jewelry, silverware, and interior design pieces in the historical setting behind Bryggen, between St. Mary’s Church and Bergenhus Fortress. Arven partners with some of Norway’s most talented designers, and a factory tour lets you see the artists at work. Shop the onsite gift shop for original one-of-a-kind items.

Visit the spinning, winding, knitting, and sewing process at Salhus’s Knitting Museum, where the factory machines now knit socks and scarves that you can buy in the museum shop. Watch the film about Salhus and learn about the history of the factory town. Enjoy snacks in the café onsite.

Germany’s biggest stronghold in Norway during World War II, Fjell Fortress, was one of Scandinavia’s main bases during the Nazi occupation. You’ll find a maze of tunnels running beneath Fjedia Mountain, housing a complex of dormitories, living quarters with kitchens, medical stations, workshops, a communications center, and a network of command bunkers. The fortress housed heavy German artillery, including a triple cannon that fired three shells simultaneously. The Cannon Tower Café serves coffee and freshly made pancakes. Get souvenirs at the museum shop.

From Fjell Fortress, continue your tour to the North Sea Traffic Museum, where Bergen citizens as the Norwegian Resistance communicated with Allied Forces in Scotland, coordinating crucial drops of supplies. Learn about the tragedy of Telavag and the North Sea Traffic during World War II.

19. Places To Eat In Bergen

Indulge in a la carte or three and four-course French-inspired meals at Brasserie Opus 16, based on the finest local ingredients, like tenderloin of beef, poached salmon, or filet of lamb with seasonal vegetables.

Purchase the Bergen Card for free entry or discounted admission to museums, attractions, events, or sightseeing tours, plus discounts at restaurants, parking, and free travel on Bergen busses, including the Bergen Light Rail between the airport and the city center.

For more on Norway, explore these articles: 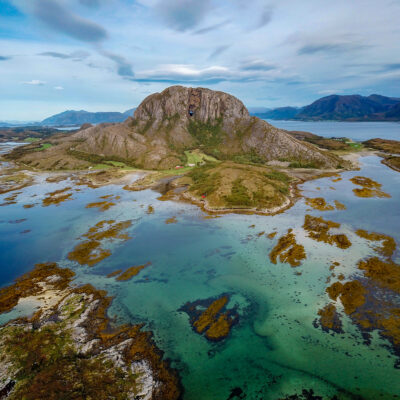 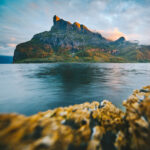 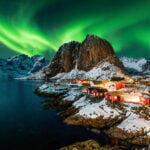