7 Fantastic Things To Do In Scenic Jupiter, Florida

Jupiter is a great little town in South Florida located in Palm Beach County. Jupiter is a smallish city of about 65,000 people and is known for being upscale but more relaxed than some of the other Gold Coast cities nearby. It’s only about 90 miles north of Miami, but it seems worlds apart because of its small-town feel. And it’s actually been named as one of the top 10 happiest seaside towns in the U.S.A. It’s a great place to visit!

Jupiter is one of the towns along the Atlantic Ocean that are located in what’s known as the Gold Coast region. Interestingly, all 8,000-plus miles of Florida coastline are split into 10 distinct “coasts” and are all uniquely named. The Gold Coast area of Florida is named for the Golden real estate opportunities in the area it encompasses, including Palm Beach, Broward, and Miami-Dade counties. There’s a lot to see in this area — including the cities of Miami, Fort Lauderdale, West Palm Beach, Boca Raton, and more. For sure one of the prettiest and most appealing towns in the Gold Coast is that of Jupiter, Florida.

Whether you stay here for a long weekend or make a quick day trip to visit, there’s plenty of things to see and do in sunny Jupiter, Florida!

Spend a day exploring Jupiter Inlet Lighthouse and Museum. Check out the historic Jupiter Lighthouse, where you can climb to the top and take in the view and then tour the small museum at the base of the lighthouse. You’ll also get to enjoy a short video that discusses the history of the area. The climb can be strenuous, so make sure you’re up for it! The historic lighthouse is open Wednesdays through Saturdays. General admission is less than $15 per adult. For something different, try the twilight yoga program, offered on Mondays, or the special sunset tours.

MLB Spring Training in Florida is a blast! There are numerous stadiums where you can watch the big leaguers play, and one of the stadiums happens to be in Jupiter, Florida. Catching a game is a fun way to spend an afternoon, and prices are much lower than regular season MLB games. In Jupiter, the St. Louis Cardinals and the Florida Marlins both play at Roger Dean Chevrolet Stadium. Major league teams also play in nearby Port St. Lucie and West Palm Beach. In Port St. Lucie, you can watch the New York Mets at Clover Field, and in West Palm Beach, catch the Houston Astros and Washington Nationals. If you’re a big baseball fan like I am, you could stay in Jupiter to watch the St. Louis Cardinals there, and then head to Port St. Lucie and West Palm Beach for more baseball. West Palm Beach is only 30 minutes south, and Port St. Lucie is only about 40 minutes north! I think it’s fun to check out different stadiums and different concessions! They all have very creative culinary specialties that are fun to try.

The Gold Coast area is famous for the giant sea turtles that lay eggs on the beaches every year during the spring and summer months. From May to October, sea turtle nesting spots dot the beaches along this area, including the beaches in Jupiter. You can join an organized tour to see the turtles, or you can walk along the beaches on your own. Many experts recommend doing an organized program because these organized groups are less disturbing to the sea turtles. One tour is located at the Loggerhead Marine Life Center in Juno Beach, which is just south of Jupiter. The Logger Marine Life Center is a nature center and small science center where you can learn about native sea life, including sea turtles. And you’ll be able to see live sea turtles here year-round. You’ll need to make reservations in advance for these popular tours because they fill up quickly.

We loved sightseeing on A1A. From Jupiter, get on A1A and head south. You’ll see glitzy mansions and cool beach towns on your drive down the coast from Jupiter to Deerfield Beach and beyond. The drive down to Deerfield is only about 45 minutes to an hour, and totally worth it. From Jupiter, you’ll go through Palm Beach, where you can view more McMansions than you can imagine. Then you’ll pass by President Trump’s estate, Mar-a-Lago. From there it’s south to Delray Beach. In Delray, I’d stop at one of the many restaurants and bars along Atlantic Ave. It’s a lively and fun spot to have a drink. And if you like ice cream, they have quite a few fabulous ice cream shops along Atlantic Ave. We absolutely loved Sloan’s Ice Cream. The ice cream shop is all pink and super cute — like something out of a storybook — and the ice cream itself is to die for. I’m kind of an ice cream junkie, so I can’t wait to go back and try the Peanut Buttercup specialty. In addition to Sloan’s, there’s also a Ben and Jerrys and a few more shops. From Delray, you’ll continue south through glamorous Boca Raton for more manicured beauty. Finally, you arrive in the more laid-back town of Deerfield Beach, where you can park downtown, get out, and look around a bit before heading back to Jupiter. Right downtown, you have your choice of lots of different restaurants, bars, and ice cream or gelato shops. You can also take a walk on the Deerfield Beach International Fishing Pier before heading back to Jupiter.

5. Golf At A Premier Public Course

Florida is a golfer’s paradise. Especially in spring when the weather is gorgeous, there’s nothing better than to get out on the greens! One of the best public golf courses in all of South Florida is the Abacoa Golf Club. Start on the driving range to get warmed up, then hit the links for a round of 18 holes. Abacoa isn’t an easy course, but it’s not impossible either. And it’s so pretty, you probably won’t mind if you have a bad day. Just take in the beauty of the fairways and all the water features!

6. Dinner At A Celebrity Restaurant

Did you know that Jupiter has been home to quite a few celebrities through the years? Movie star Burt Reynolds, singer Celine Dion, Golf great Tiger Woods, and basketball star Michael Jordan have all had homes here at one time or another. Tiger Woods and Michael Jordan both opened restaurants in Jupiter as well. At Michael Jordan’s restaurant, 1000 North, you can indulge in steaks, seafood, and more while dining on the waterfront at this upscale restaurant.

You’ll be able to dine al fresco while taking in the view of the Jupiter Lighthouse. Reservations are recommended at this popular restaurant.

You can also check out Tiger Woods’ restaurant, The Woods. Tiger describes his restaurant as an elevated sports bar experience, but The Woods is definitely more upscale than any of the sports bars I’ve been to! The restaurant offers diners traditional options like a 12-ounce prime New York strip, chicken piccata, as well as a wide range of seafood dishes like ahi tuna and snapper on angel hair pasta. And, they have a pretty good happy hour!

Jupiter is a beautiful place to visit. One of the best ways to explore Jupiter is by getting out on the water and paddling around in a kayak. You’ll be able to get close to the many mangroves and just experience beautiful nature. Plus, you might see manatees (we did), dolphins, and other wildlife. At Get Up and Go Kayaking, you can take a 2-hour guided tour in their clear kayaks. Since they’re clear, you’ll get a fantastic view of the water below. There are weight restrictions for the kayaks. The waters are beautiful and such a peaceful way to enjoy a morning or afternoon. The tours are very reasonably priced, too, at around $50 per person.

CampingCampspot: Best Campgrounds Near The Water 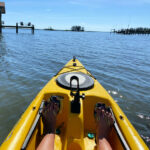 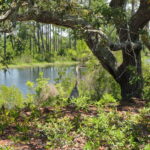