In the part of the world where the Christmas market was invented, Vienna is tops. Hundreds of thousands of people flock to the capital of Austria every year to indulge in the holiday markets, festivities, and events that are like no other across all of Europe. One can easily spend four to five days visiting the 20 official Christmas markets of Vienna plus plenty of other off-the-beaten-track markets, sampling holiday foods, going to concerts, and participating in other activities and still not do it all.

The first official market, proclaimed by King Albrecht I in 1298, has become a tradition over the centuries and has expanded to areas all over the city. Markets open in mid-November and continue through December 26. Opening times are around 11 a.m. daily, and many of the markets stay open as late as 10 p.m. on Friday, Saturday, and Sunday. Many of the markets close on December 25 and 26 and reopen as New Year markets from December 27 until January 6.

Here are our recommendations for the best markets and holiday events in Vienna.

One of the most enchanting markets has the added backdrop of the striking, Gothic-style City Hall built of brick in 1883. The traditional Rathausplatz market has 150 stalls selling Christmas ornaments made of hand-blown glass, small gifts, and handicrafts. Every few feet, there are stalls selling hot wine and cocoa to help you warm up from the cold, and if you are hungry, you can have everything from sausages with sauerkraut to jumbo Christmas tree-shaped cookies.

A special treat for children are the cookie- and candle-making classes given on the main floor of the City Hall. An international choir sings Christmas carols on Friday, Saturday, and Sunday.

In front of the City Hall is a large park that has a tree with hearts hanging from it, expressing the romance of the season. There’s also a skating rink and, for the kids, a mini-amusement park with a festive carousel, a reindeer train, and a light show.

Another stunning backdrop for a Vienna Christmas market is Belvedere Palace, consisting of two Baroque palaces in one complex. A little bit more intimate, the market has 40 stalls. Music is an important part of the market with oompah bands playing along with choirs, trumpeters, gospel choirs, and other musical groups adding to the holiday spirit.

3. Advent Market At The Opera House

The Advent Market at the opera house is a food-only market where you can feast on hot sausages, giant pretzels with mustard, candies, chocolates, cheeses, mulled wine with spices, beer on tap, pastries, breads, cakes, and hot chocolate at the chalet-style stalls.

In the inner courtyard of the prestigious Spanish Riding School — known for its world-famous Lipizzaner breed of white horses — is an almost hidden market. Designed like a Renaissance-style market, it features handmade products from lower Austria and gourmet food stands. Local musical celebrities perform and also give lessons. The highlight of the market is watching the Lipizzaner horses in action in their outdoor stalls.

Once a run-down neighborhood with 19th-century buildings and a red-light district, the Spittleberg was rebuilt in the 1970s. Today it is a thriving, upscale neighborhood and has a popular Christmas market. Now in its 25th year, the market specializes in local handicrafts, glassware, and artworks, and it also presents food stands with international cuisine and drinks. The Spittelberg Market also offers an extensive cultural calendar with modern dance performances, a puppet theater for children, classical music, choirs, candle-making workshops, and, last but not least, an appearance by Santa Claus handing out healthy treats such as fruits and nuts.

A grand plaza housing two of the most noted museums in Vienna, the Art History Museum and the Natural History Museum, Maria-Theresien-Platz has an enchanting market.

One of the largest markets in the city, it’s especially known for its stalls with special handicrafts made in Austria such as ceramic mugs, leather-bound diaries and notebooks with handmade paper, beeswax candles, and hand-carved wood figures.

After you visit the market, take in the formidable museums.

The Maria-Theresien-Platz market also has a New Year’s market, similar to the Christmas market, from December 27 to January 6.

The VinziRast Advent Market is unique because all the products are handmade by refugees under the supervision of a charitable organization. The market dates are usually the last weekend in November.

Other Holiday Events And Activities

There’s so much more to do during the Christmas season in Vienna than just shopping the markets.

Known for its superior classical music and grand concert halls, Vienna has an extensive range of Christmas concerts and entertainment.

Mozarthaus is where Mozart lived, and it is now a museum. On the lower level of the museum, in the small concert hall, Bosendorfer-Saal, you can listen to the magic of Mozart’s music with nightly concerts. Perhaps you may spot Mozart’s ghost listening in.

The Schonbrunn Palace is one of the top venues in Vienna, in addition to being a museum. The palace has three concert halls and the highly respected Schoenbrunn Palace Orchestra plays the music of Viennese composers Mozart and Strauss. If you purchase a VIP ticket for Christmas Eve or New Year’s Eve, you get a choice seat, a flute of sparkling wine, and an audio CD of the performance.

Start your walk at the St. Stephen’s Cathedral and walk toward the State Opera house to take in the dazzling light show including outdoor chandeliers and rows of colored lights.

You can also buy a ticket for the hop-on, hop-off buses or the tram to view the decorations around the entire city.

Specialty holiday pastries fill the local bakeries in Vienna. Lebkuchen is similar to a gingerbread cookie, made with spices and honey; stollen is a bread speckled with bits of dried fruit; Spekulatius is a biscuit made with cinnamon, cardamom, cloves, and nutmeg, usually in the shape of a farmhouse; and Weihnachtskekse are bite-size butter cookies.

The Viennese love their winter sports, and ice skating is one of the most popular. Rinks are frequent in the city.

The Wiener Eistraum, also known as the Viennese Ice Dream, is a mammoth two-level ice skating rink with over 29,000 feet of skating space. Skates and helmets are available for rent. There’s also a high-quality organic food stand and restaurant.

Although Volksoper Wien advertises a special set of children’s operas, adults can enjoy them just as much. Programs include Hansel and Gretel and the Ghost of Canterville.

The Schonbrunn Marionette Theatre features the Vienna Opera for Children, which performs marionette shows such as The Magic Flute in a small theatre.

Did you know there’s a fifth season in Vienna? From mid-November to March is the ball season, with over 450 balls to attend. The first ball of the season is the Viennese Chimney Sweeps Ball, which takes place on November 16. The most lavish ball is the New Year’s Eve Ball, which takes place at Hofburg Vienna (the former Imperial Palace) with guests dressing in costume along with a gala dinner and the finest Austrian wines, fireworks, and the Blue Danube waltz.

Swan Lake, The Nutcracker, and Mahler Live (with dance set to Mahler’s music) are just a few of the dance performances put on in Vienna during the holiday season.

Just a little bit over an hour from Vienna, you could be skiing on the slopes of the Austrian Alps. Unterberg – Pernitz is the closest ski resort to Vienna, an hour and 10 minutes by car or 90 minutes by train. There are four lifts with 10 miles of slopes for skiing and snowboarding. Unterberg – Pernitz also offers tobogganing, cross country skiing, and curling. Ski rentals are available.

Many vendors only take cash at the Christmas markets.

Although the markets are open during the day, nighttime is special because of the decorative lights and decorations.

Bundle up! The average daytime temperature in Vienna in December is about 35 degrees Fahrenheit during the day, dipping into the 20s at night, so dress accordingly. If you forget to bring a hat, gloves, or a scarf, no worries, every market sells them in bold colors and some are knitted by hand.

Here is a list of foods served in the market with translation from German to English: 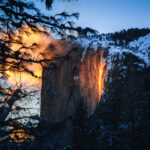 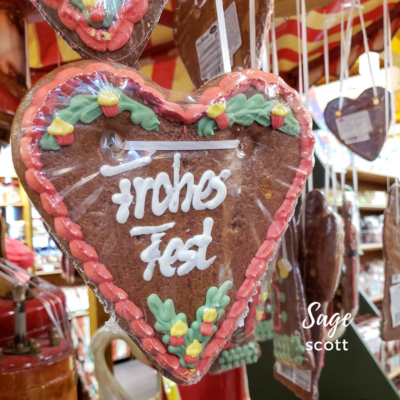