How To Plan A Christmas Markets Road Trip In Europe

Belgium, Germany, and France are dazzling any time of the year, but as the holidays near, these countries shine even brighter. That’s why a Christmas markets road trip in Europe isn’t just fun — it’s a must-do for holiday and travel enthusiasts.

Starting around late November each year, cities across Europe transform their main squares and even some historic sights into seas of red, green, and tinsel. Themed rides and massive trees nearly overshadow cities’ historic churches and monuments, although these sites get their holiday moments, too, as many towns project colorful light displays across their iconic facades.

The holiday cheer is equally impressive in small towns, which makes planning a Christmas markets road trip tricky. So much to do, so little time! While you could spend every single day of your holiday season checking out new towns, I’ve synthesized information based on my own holiday road trip in December 2018 to help you plan an efficient and memorable European Christmas markets road trip through Germany, Belgium, and France.

Few things will warm your holiday heart like Munich’s Bavarian architecture shining under evergreen roping and lights. The Munchner Christkindlmarkt is as traditional as Christmas markets come, with the entire main Marienplatz and beyond covered in holiday decor. Beyond rows and rows of quaint stands selling holiday fare, Munich has an enormous, decked-out tree right in front of its town hall.

The Munchner Christkindlmarkt starts in late November (typically after American Thanksgiving) and runs right up to Christmas.

Holiday decorating isn’t just fun in Stuttgart, it comes with some friendly competition. Stuttgart runs a contest in its Stuttgarter Weihnachtsmarkt to see which stall is decorated best. This transforms Stuttgart’s town center into something that looks like it’s straight out of Whoville. The lightbulb-dotted stalls sell handcrafts and serve local cuisine. The entire affair is set to the backdrop of cheerful choirs and, of course, Stuttgart’s medieval castles. The city’s Esslingen Medieval Market takes its own spin on holiday fun, with street performers and stilt walkers who engage wide-eyed crowds.

Stuttgart’s festivities kick off in late November as well, with the festivities extending up to a few days before Christmas.

Cologne offers one of Europe’s most beautiful holiday market experiences, with a tiny village of little red-roofed stalls that sparkle beneath an elaborate tree and the gothic Cologne Cathedral. The Weihnachtsmarkt Am Kolner Dom (Cologne’s main market) offers all the treats and trinkets you’d expect at European Christmas markets — think ornaments, hot chocolate, and pastries — but things get kicked up a notch by the Weihnachtsmarkt Am Kolner Dom’s array of organic, locally produced food.

Beyond the Weihnachtsmarkt Am Kolner Dom, Cologne’s Angel’s Christmas Market is built around the city’s main shopping area, Neumarkt.

Cologne’s holiday fun kicks off in late November; the festivities run until Christmas.

We promised tiny little holiday towns, and with Monschau, we’re delivering. This town boasts Bavarian charm, with quaint hillside homes built along a rushing river. Monschau, in Germany’s Aachen region, is small-town Germany at its finest — particularly when it comes to the holidays.

The main square may be small when compared to the likes of Cologne or Munich, but that doesn’t mean Monschau’s Christmas market is any less cheerful. Expect small stands selling traditional holiday goods, with a collection of Christmas trees and tinsel spread throughout the city. If you can, stay in Monschau until dark so you can see the city’s glow reflected in the river.

Like the rest of Germany, Monschau’s market runs from late November until right before Christmas.

Bruges is one of Belgium’s most popular cities and for good reason — its reflective canals, horse-drawn carriages, and neo-Gothic architecture are as beautiful as they come. Add Christmas to the mix, and this city might as well be the Claus’s second home. The city’s main square is filled with log cabin-style stalls selling everything from hot cocoa to fried local fish, and better yet: those traditional Belgian waffles. Meanwhile, holiday tunes can be heard throughout the town.

This is another place you’ll want to experience past dark because nothing beats the Bruges canals reflecting holiday decor and the well-lit old buildings.

Bruges starts the festivities in late November, and the fun carries over into the New Year.

During the holidays, Ghent’s main thoroughfare is decked out with more than 150 wooden-hut stalls. Many of these stalls center on one of Belgium’s most beloved exports — beer — with cozy little tents branded by breweries like La Chouffe that will make you feel like you’re imbibing in a true winter wonderland.

Beyond the main city square, Ghent’s Count’s Castle also joins in the holiday fun. While its normal exhibits can get a bit scary (as in, medieval torture exhibits), the basement’s transformed into a cheery little underground Winter Wonder Castle, where beer is served in medieval, horn-shaped vessels and Christmas trees line the vaulted room.

For the best views of Ghent’s markets, head to the top of the Saint Bavo’s Cathedral tower. This historic church is dazzling as it is, and is only made better by the eagle-eye view its observation deck provides.

Ghent’s markets kick off in November and last early into the New Year.

Walking through Brussels’s main square in December transports you back to holidays in the medieval age. Quaint timber stalls topped with lights and faux snow sell delicious bites, including waffles and gluhwein (mulled wine), which you can buy in a cute souvenir glass. And Brussels’s markets aren’t contained to the square; they basically take over the entire city. Thankfully, there are maps and signage all over town so you won’t miss things like the light show on the Grand-Place or the sky-high Ferris wheel.

As you walk up to Luxembourg City’s main square, don’t be surprised by the sense of nostalgia; visiting this city during the holidays will make you feel like you’re in a favorite childhood fairytale (which for me was Beauty and the Beast). Luxembourg City is strikingly beautiful, particularly when dusted with snow. Pair that with a cobblestone downtown decked in lights and evergreen boughs, and wow! It’s hard to believe this place is real.

Thankfully, though, it is real as can be. And so is its Christmas market, which takes over virtually all of downtown with rows of wooden stalls, bars, and sitting areas that feel more cabin than main square. The city’s marketplace has a huge skating rink, ringed by trees lit in all sorts of holiday colors.

While it’s open year-round, one of the best places to experience Luxembourg City’s holiday charm is the iconic Chocolate House Bonn. This beloved shop allures crowds with wooden stirrers coated with a huge chunk of chocolate; you can choose from a wall of flavors. I went with the 72% chocolate because I’m all about dark chocolate, but my brother opted for the strawberry-flavored chocolate, which was sweeter but equally good.

Luxembourg City opens its annual Christmas market right around American Thanksgiving and keeps the festivities going through the beginning of the New Year.

What better place to end your European Christmas markets road trip than in the City of Lights itself? Paris’s enchanting monument lights — especially that hourly display of sparkling lights on the Eiffel Tower — make the city feel like it’s constantly in holiday mode, but things get even prettier come holiday time.

The bulk of Paris’s markets are situated near its main attractions. The Eiffel Tower has a small row of stalls, which pale in comparison to the main Christmas market situated right along the Tuileries Garden, near the Louvre. This huge Christmas market has stalls, sweets, tented restaurants with live music, and some particularly fun rides. If you can, hit up the market’s Ferris wheel, as this is one of the few places where you can view the Eiffel Tower, Louvre, Champs-Elysees, and even Sacre Coeur Cathedral from above. Even better? You’ll get to ride around for these views at least four times.

While Paris neighborhood may not have traditional markets, you should spend some time exploring its different areas, including Montmartre, during the holidays. The Parisians’ minimalistic-yet-charming touches of Christmas bring even more cheer to the city’s already attractive neighborhoods.

Before you start booking your festive European road trip, read up on our top European Christmas Market tips. Happy holidays! 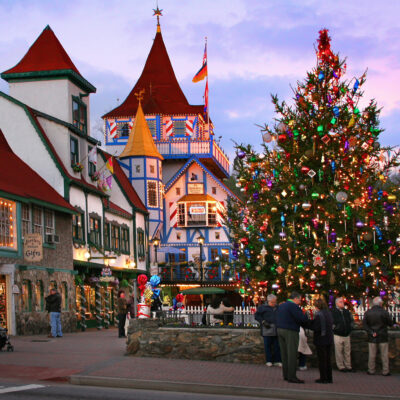 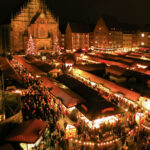 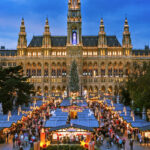