Although I’m a lifelong beachcomber, I had never heard of sea glass, or seaglass, until it was briefly mentioned in an American sitcom. Fresh air, the sound of waves, the cries of gulls, the horizon stretched out in front; while some go for meditation, I generally just need to hit a beach and the world’s troubles fall off me. Now I have an additional focus, and a walk on the beach turns into a bit of an excursion, with a bag at the ready, head down, horizon and ships in the distance often ignored. I am hunting for old glass. Really.

And I am not alone. You will have seen these people; at low tide, they wander along the shores with a concentrated look on their faces. They, and I, are not looking for seashells, but for little pieces of glass, trodden on and ignored by most, but much cherished by others.

That old saying “One man’s trash is another man’s treasure” has never been truer than when it comes to sea glass. Sea glass, seaglass, beach glass, or even mermaid’s tears, is, quite basically, discarded glass that is found on shores of rivers, lakes, and the sea. The remnants of old bottles, glasses, windows, food jars, vases, trinkets, and more, the shards have been tossed and frosted by the waves over the years until they are shimmering, smooth little gems.

The most-found colors are green, brown, and white, but there are also pinks, lilacs, blues, yellows, and aqua blues — basically, any color that might have once been used for something made from glass. And, if you are really lucky, there are multicolored pieces.

There is added fun to be had after your initial day out on the coast. Once you’ve collected some sea glass, it’s time to research, sort, and display what you’ve found. It is said that the first sea glass used for decorative purposes was in Philadelphia around the turn of the last century. Families displayed collected pieces of sea glass in jars on their window sills to show the neighbors just how much time they spent holidaying on the beaches. Today, displaying found treasures is still an important part of the hobby of sea glass hunting, or seaglassing, a term which incidentally found its way into the Urban Dictionary not long ago.

There are online communities where sea glass collectors exchange photographs and tips on the provenance of select pieces, show off rare colors, and even swap items. There is an annual sea glass convention in America, which brings together enthusiasts of this finite resource that will disappear once we learn not to discard trash into the waves anymore.

There are countless beautiful beaches that double as good sea glass beaches out there, and quite often, people keep their locations to themselves. I have tried to give you a selection of locations, from oceans to lakes, north to south, east to west, the best beaches, from sandy beaches to pebbly beaches, hoping that you might be close to one of them in the near future. Happy hunting!

Forth Bragg sea glass beach is located in Northern California a few hours north of San Francisco and plays host to this sea glass beach filled with all the sea glass colors. Glass Beach is adjacent to MacKerricher State Park and is one of three beaches in Fort Bragg that were official dumpsites in the 1940s. As a result, this is the sea glass beach, probably the best and most unique in the world.

Basically, the entire beach is made up of sea glass instead of sand. The problem is, while you can look and touch, collecting is strongly discouraged (in fact, some sources even say it’s illegal). Instead of picking up the admittedly rather tiny baubles, you can visit the International Sea Glass Museum nearby. It is a little quirky but has some quite unusual sea glass finds on display, which are sure to spur you on.

This beach is known as the Seaham Beach (see below) of the U.S., but it’s more dangerous and more difficult to access. Just north of Santa Cruz in California, the coast has sheer cliffs and a very devious and rough sea. If you do go, always be on the lookout and heed warnings, and prepare to get a proper soaking — many beachcombers and sea glass collectors have been known to wear wetsuits when out seaglassing.

But if you are lucky, you can find multicolored glass that, as legend has it, dates back to the 1970s when a huge flood whisked away containers of baubles from a glass-blowing studio called Lundberg down the San Vicente Creek that are still being washed up today.

Go for a walk away from the popular sandy bathing beach toward the scenic, pebbly beach close to the forest, and you will soon realize that you don’t need an ocean to make perfect sea glass. This secret (or now not-so-secret) spot on Lake Michigan rewards beachcombers with all types of sea glass in many colors, plus bottle stoppers, marbles, and smoothed pottery shards, which are collected by many with as much enthusiasm as glass.

These beautiful sea glass beaches are located at Ireland Island South in Sandy’s Parish off Cockburn Road, and, according to locals, the sea glass here is a result of a former glass factory nearby. You can combine your vacation adventures here by snorkeling between Black Bay Beach and Sea Glass Beach, which might just come in handy since at high tide, the beach nearly disappears. There are reports that because of too many cruise visitors it is no longer permitted for people to collect sea glass, but searching and finding rather than keeping it is the best part of the fun, anyway.

This is my personal favorite sea glass beach, not only for its high cliffs and seemingly endless views and being a fun place to take the dog for a walk, but also for its famous multicolored sea glass. I have found white pieces with green and blue stripes, a green piece with a slash of red, and more. The secret is that there used to be a glass factory just up the coast that did a lot of experimental pieces and obviously discarded all the mistakes straight into the sea.

Unfortunately, this beach is incredibly famous now, and the chance of finding something special decreases by the day as people travel far and wide to this beach.

Instead of a sandy beach, this is more of a couple of rocky coves where you can imagine old-time smugglers landing by night. Just outside the city limits of Plymouth, the beach is full of rocks and rock pools full of little crabs and fish. Higher up though, you find coarse sand that, upon closer inspection, holds quite a few sea glass gems. This being a coast shaped by rough weather and high tides, the finds get replenished regularly.

If you are visiting Morocco and get to tour the UNESCO site of Essaouira, be sure to look past the ramparts and step out to the secluded rock pool-type beach. Not only can you channel your inner marine biologist as there are plenty of crabs and sea cucumbers around, you can also find all sorts of sea glass and sea-worn porcelain pieces. But be sure to wear some decent shoes, as the rocks are very sharp.

If Siberia is not on your way somewhere, then it might just be worth going out of your way to explore this beach, especially if you are a dedicated beachcomber or sea glass enthusiast. As with Glass Beach in Fort Bragg, this beach is practically made up of sea glass, shimmering in all the colors imaginable. And the pieces are larger than what you’ll find at the Fort Bragg beach. This bucket-list beach is a 30-minute drive outside Vladivostok. Go on a sunny day, and you’ll be blinded by the glittering. Go in winter, and you have the magical contrast of white snow against the sea glass.

Should you ever find yourself outside Naha, the capital of Okinawa Island in Japan, don’t miss going to this sand beach. Reportedly, this used to be a bit of a dumping ground when the island was occupied by Americans after the Second World War. After all these years of littering, the broken bottles and miscellanea have been washed smooth, and today the beach is scattered with colorful sea glass gems instead. This beach yields rare colors such as yellow, reds, and purples instead of the more common white, browns, and greens.

Brighton Beach is famed for its colorful Victorian beach huts and its lovely location just outside Melbourne. But if you keep walking with Melbourne’s skyline behind you, you will come to a small cove perfect for sea glass. If you keep walking, up the hill, across the parking lot, and down again on the other side, the sandy beach is also a superb hunting ground, especially after a high tide or a storm. I have found many old glass bottle stoppers there, so keep a careful lookout.

The best beaches for sea glass collecting and beachcombing are somewhat rocky and often have pebbles and rock pools rather than being pristine and sandy. As for the best time to go seaglassing: Try to visit as the tide is going out so you’ll be there for low tide. And if you can visit after a spring tide or a storm, all the better. And please respect the local laws: If the glass is for looking only, then try your best not to succumb to temptation. 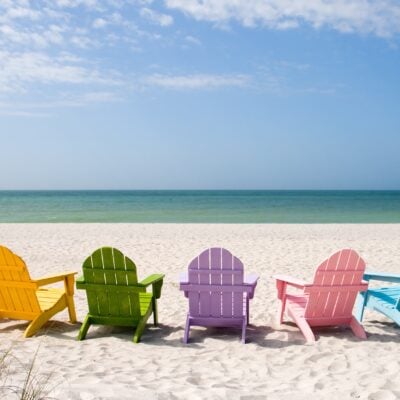 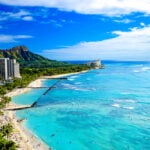 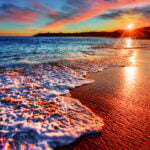