9 Things To Know Before Exploring The Beautiful Whitsundays

The Whitsunday Islands, after initially being called the Cumberland Islands by Captain Cook, were later renamed for the holiday that fell on the day he first arrived in the islands. There are 74 islands, most of them designated national parks, and only eight of them are inhabited and with resorts in place. Hamilton Island is not only the largest inhabited island but also the hub of the Whitsundays. Some 560 miles north of Brisbane and 300 miles south of Cairns, these centrally located islands are a must when visiting the Great Barrier Reef.

The Whitsundays offer anything and everything, from deserted islands reached only by boat or helicopter to celebrated luxury resorts, the world’s prettiest beach to a tiny heart-shaped reef, smart yacht clubs to nature walks, and all the water sports you can imagine.

When I first arrived on a ferry from Shute Harbour to Hamilton Island, I was on a day trip. I rushed around all morning, trying to see as much as possible before slowly realizing that there is a reason islands have island time. As soon as I slowed down, sat down, and breathed deeply, I realized why these islands are so popular. The beauty combined with a calm approach to life, the beaches, the clear water, and the quirky little shops and restaurants make for a perfect vacation spot to relax.

Most people stay on Hamilton Island simply because there is a wide choice of accommodation, from private apartments to luxury resorts, and pretty much all budget levels in between, while on other islands — if there is a place to stay at all — it will be just the one choice. Plus, on Hamilton Island, there are plenty of restaurants, shops, and day trip departures that will take you off to other islands.

Intrigued? Read on to find all the tips you need before booking your trip. This way, you won’t have to waste any of your precious island time.

1. The Best Time To Visit The Whitsundays

The best time to visit weather-wise is during the Southern Hemisphere spring, between October and December. The wet season (December to March) has not yet started nor have the Australian summer holidays. That said, November to May is stinger season, when the tiny Irukandji jellyfish are common. The stings are not usually deadly but can be very painful. The good news is you can rent stinger suits, which are like very thin wetsuits that protect you when you go into the water.

The dry season, April to September, coincides with whale-spotting season as these creatures swim up the coast between June and September.

August is a busy time with many sports events taking place, from the Airlie Beach Race to Hamilton Island Race Week. This is a great time to watch a regatta, but it’s pricey and difficult to get a room to stay in.

The same goes for September and October, when Australians enjoy their spring holidays, many families bring their kids, and resorts are booked out well in advance.

2. Save Time By Flying

If you are time starved, as most people tend to be when coming to Australia, and trying to cram in a lot of this gorgeous country, then you can save time by flying to the islands from Brisbane, Sydney, or Melbourne. From Brisbane, it is an easy 90-minute flight, and from Melbourne, it is just shy of three hours, whereas from Sydney the flight takes just under two and a half hours. You can fly straight onto Hamilton Island’s Great Barrier Reef Airport, or Hamilton Island Airport, code HTI, and if you are staying at qualia, Beach Club, Reef View Hotel, or Palm Bungalows, a free transfer will be waiting. Otherwise, a shuttle bus or taxi can take you the short distance into the center.

An alternative airport is Proserpine Airport, also called Whitsunday Coast Airport, code PPP. It is on the mainland and is perfect if you are basing yourself there. It’s also a scenic ferry ride away from Hamilton.

4. Buggy Down On Hamilton Island

If you have booked the Island Hopper Pass, you can use the free shuttle bus service to get around, but if you want to drive yourself and have some island fun, rent a golf buggy on Hamilton Island. It’s the coolest way to get around. They seat up to four people, have a canopy for shade, and are easy to drive. Note that 72-hour advance booking is required, as the numbers are limited in order to avoid clogging up the few streets. You can rent them from one hour to 24 hours, with the price not being much different between the two. Just bring a valid driver’s license and credit card, and off you go.

The best way to explore the Whitsundays is by boat. If you are a confident sailor yourself, you might want to try bareboating, that is, renting a yacht. Whether your vessel of choice is small or luxurious, you’ll be your own crew.

If you still would like to sail but prefer someone else to take the strain, you can hire a yacht with crew. Choices are either having a boat all to yourself, or opt for a cabin on a catamaran with a handful of other travelers and go on an overnight or longer trip. If sailing is not your thing, you can also hire motor yachts, bare or with crews. The options are nearly endless.

There is a brand new attraction in the Whitsundays — one that you could easily miss unless you are in the know. It’s the Ngaro Underwater Marine Sculpture Trail. Combining art and nature to highlight the plights of the reef and the ocean, the trail is made up of six large marine fauna- and flora-inspired metal sculptures, including a turtle, a Maori wrasse, and manta. The majority were installed where the reef was destroyed by Cyclone Debbie in 2017. There are scuba-diving and snorkeling trips to the sculptures, but because they are installed in shallow water, they can also be spotted by boat. Pick up directions at your hotel reception.

7. Catch Sunset At One Tree Hill

This is the place to not only enjoy 360-degree views of the island and surroundings but also the best place for sunset over cocktails and dinner. You can watch the sun go down behind the mainland hilltops, with the islands in the foreground slowly becoming one with the ocean. It is quite magical and well worth the walk from the center of Hamilton — slightly uphill but certainly not a hike. Alternatively, you can take your golf buggy. Book ahead if you want to make sure you’ll get to stay for dinner.

Slip-Slop-Slap was an iconic Australian and New Zealand sun danger awareness campaign in the 1980s. In the Southern Hemisphere over Australia, the ozone layer is severely depleted, and the sun is quite simply dangerous. Cancer rates in Australia due to sun damage are worse than anywhere in the world, and even if you are unlikely to do that much damage during a brief vacation, a sunburn can still hamper the enjoyment of your short time down under. So slip on a shirt, slop on the sun cream, and slap on a hat. In recent years, the campaign has been extended to also include “Seek shade or shelter” and “Slide on some glasses to block out sun.” Remember the five s’s to stay safe under the Australian sun.

9. Use Airlie Beach As A Landside Base

If you decide not to base yourself on one of the islands, the closest mainland town is Airlie Beach. It’s a lovely seaside resort with a very chill feel thanks to plenty of old and young hippies, some leftover from original days, I am sure. There are plenty of restaurants, little shops, even a bookshop where you can swap your read books for ones you haven’t. It is a great base from where to explore inland and the islands. From here, as well as from Hamilton Island, you can go on any excursion you might opt for, be it flying to Whitehaven Beach, going for a sail, or spending the day on the reef swimming and snorkeling.

For a comfortable self-catering base, try the Mango House Resort — not only is it really pretty and not too pricey, but it also has parking, plenty of space, and an ideal location for accessing nearby Conway National Park, Airlie Beach, and the ferries to the islands. Enjoy your island time in the Whitsundays and consider these nine best islands of the Great Barrier Reef, too. 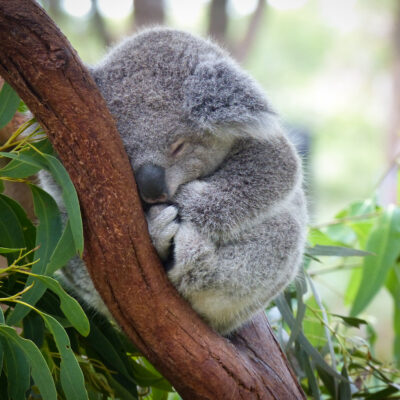 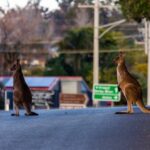 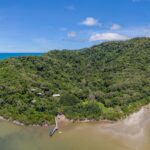