The Mississippi River makes up the entire western border of Illinois. If you want to cross over into Iowa or Missouri, you have to cross a bridge over the Mighty Mississippi. Along the entire river, you will find the Great River Road, a series of roads along the Mississippi that run from the far northwestern corner of the state (near the Iowa and Wisconsin borders) to the far southern tip of the state (near the Missouri and Kentucky borders).

This is all part of a National Scenic Byway that encompasses the Great River Road along the entire length of the Mississippi River from northern Minnesota to southern Louisiana. For this trip, we’re going to concentrate on the Illinois portion. And while the Great River Road does extend all the way to Galena to the north of the state and Cairo to the south, we’re going to focus on the middle portion. Our road trip will take us from the Quad Cities to St. Louis.

Let’s start our trip from the north, in the Quad Cities.

The region is called the Quad Cities because of the four main cities that make up the metropolitan area:

All in all, this area has a combined population of around 380,000 people, so you’ll find plenty to do. There are many great hotels in this area, so the Quad Cities can easily be a multi-day stop on your trip.

Davenport, Iowa, is the largest of the Quad Cities, so it makes a great starting point. Our plan is to cross the Centennial Bridge over the Mississippi River from Davenport to Rock Island in order to begin our trip, so Davenport is probably the best place to find lodging, too.

As far as things to do in the area, I couldn’t do better than fellow TravelAwaits writer Tim Trudell’s nine unique things to do in the Quad Cities, from Mississippi River cruises to visiting the original American Pickers antique store. Take your time going through that list, and then let’s get started on our trip.

Our first stop will actually take us off of the Great River Road and back across the Mississippi. We’ll be driving down the Illinois side of the river the entire time, but once you get to Gladstone, Illinois, take Highway 34 to the west, cross the Great River Bridge, and discover the river town of Burlington, Iowa.

Burlington is best known for Snake Alley, a winding street that zig-zags down from the top of the river bluff down close to the river. It’s very similar to Lombard Street in San Francisco in that you enter from the top and take the long, winding route down to the bottom. Once per year there’s also a bicycle race here, and the competitors (somehow) climb Snake Alley as part of the route.

But there’s much more to do in Burlington than just drive this famous street. There’s a vibrant downtown, great restaurants, a casino, and much more. There’s also a great park — Mosquito Park — with incredible views of the river.

From Burlington, go back across the river and follow the signs for the Great River Road again. You’re going to travel about a half hour to Nauvoo. And if you don’t know the history of Nauvoo, get ready to be surprised.

At one end of the downtown area sits a massive (and I mean massive) church building. It is the rebuilt LDS temple, which reflects the history of the area. Before Brigham Young led the Mormons on a trek to Utah, the church was headquartered in Nauvoo. In fact, in 1844, Nauvoo was one of the largest cities in Illinois. After the death of church founder Joseph Smith, Young led the Mormons to Utah, and the town of Nauvoo would never be the same size again. In fact, today, its population is one-sixth what it was at that time.

Believe me, Nauvoo will surprise you. You’ve been driving through numerous small river towns, you enter another small river town, and here sits a massive church building overlooking the river valley below. It’s quite amazing.

Next you’ll follow the Great River Road to the south for about an hour until you get to Quincy, Illinois. This is one of the larger towns we’ll visit with a population north of 40,000. But it still has a small-town feel that you’ll find in most river towns in this area.

The best recommendations I can give here have been compiled by the local convention and visitors bureau (CVB). Many people road trip through the area, so the local CVB has developed several driving tours for you to utilize during your visit. They’ve included everything from art drives (so you can see all the local murals) to eagle drives (with recommendations on the best places to see the area’s bald eagles). Check out this webpage to see all of the driving tours.

We’re going to cross the river again, this time to go into Missouri. As you’re travelling south from Quincy on the Great River Road (which is Highway 96 in this location), turn west on Highway 54 and take it approximately six miles until you cross the river. Once you cross the river, you’ll come to a stop sign. Turn left, and this will take you right to downtown Louisiana.

Georgia Street is the main drag in Louisiana. And it’s quite long for a town of only 3,200. Louisiana is similar to many other river towns we’ve been through, with antique stores, ice cream shops, and knick-knack stores dotting either side of the street. Take some time and explore some of the side streets as well — Louisiana is known for its great old Victorian homes.

You can also visit the oldest fruit tree nursery in the United States — Stark Bros. Their property is quite unique. It’s a place you simply have to see to appreciate.

Grafton is the smallest town we’re visiting on our road trip. But it has just as many things to do for a road-tripper as many of the larger cities. Because this link of the Great River Road (which goes from Grafton south to Alton, Illinois) is the most well-known, Grafton attracts tens of thousands of visitors each year.

My favorite spot in Grafton, Pere Marquette State Park, is just to the north of town. Make sure to check out the lodge. It was built by the Civilian Conservation Corps during the Great Depression and features everything you’d expect in a lodge from that era — massive timbers, a giant stone fireplace, and incredible views. If it’s not being used, make sure to play chess in the lobby with the life-size chess pieces. There are also trails at Pere Marquette with some of the best views in the entire region, but be aware that many of the climbs on these hikes are very steep. You’re basically climbing the bluffs above the river. There is an option to drive to the top and walk to some of the overlooks.

Back in town, enjoy all of the shops along the main drag in Grafton. This is a day-trip destination for many St. Louisians, so expect lots of people and crowded restaurants. Make sure to stop at Grafton Fudge And Ice Cream for a sweet treat.

This is our final destination. We’ll get to some things to do in a moment, but this first part is the most important. To me, the most scenic part of the entire Great River Road — and I’ve driven all of it from Galena to Cairo — is the section of the Great River Road just south of Grafton between Grafton and Alton. In fact, if you do an image search for “Great River Road Illinois,” nearly every photo will be of this section. You’ll be driving right next to the river — so close that this portion of the road is often closed when the river is high — with massive white cliffs hovering above. Trust me, of the driving portion, this will be the highlight of the trip. Have your camera ready.

Once you pass through Alton, you can take the Clark Bridge across the river into the St. Louis area. St. Louis is where I spent most of my life, so I could give you paragraph after paragraph of things to do in the area. But I don’t think I could do any better than some of the articles we’ve already published on the topic.

Consider these 12 things you have to do when you’re in St. Louis, visit these 11 excellent hidden gems, and, if you’re hungry for ribs, take my advice on how to do a delicious St. Louis rib crawl. It’s the perfect end to a great drive. 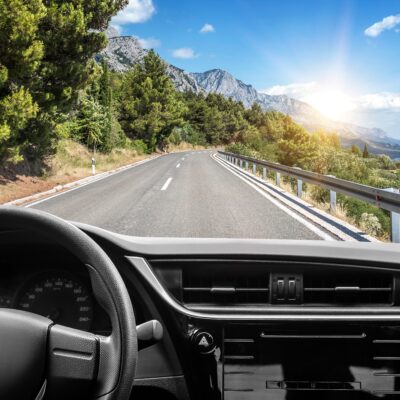