In the 1970s and early 1980s, Glasgow, Scotland, was knockabout industrial, with waning fortunes and high unemployment, and making headlines for culinary crimes like deep-fried Mars bars.

In 1983, Glasgow announced it would transform itself through culture. It wasn’t about increasing tourism, but creating a city locals could enjoy.

The results were outstanding. Glasgow was named a European Capital of Culture in 1990, a UK City of Architecture and Design in 1999, and a UNESCO City of Music in 2008. It hosted the 2014 Commonwealth Games and was named Europe’s top destination in The Cultural and Creative Cities Monitor in 2019 — ranking well above Edinburgh, the Scottish city most tourists prioritize visiting.

Here are just a few reasons to visit this underrated Scottish city.

1. Glaswegians Are Friendly And Funny

Glasgow is only a 45-minute commute from Edinburgh by train. Some of the first things you’ll notice are banners proclaiming People Make Glasgow. Edinburgh is clogged with tourists, but in Glasgow you’ll meet locals. Standing at a bar or in any queue, Glaswegians will chat away as if you were their next-door neighbor. When I didn’t have the change I needed for my bus fare, a Glaswegian paid for me. My Airbnb hosts not only met me at the station, but when I needed to rise at dawn, they brought up a breakfast tray and a completely unexpected packed lunch.

Glaswegians talk in rapid-fire, but concentrate or you’ll miss out on some great one-liners. Billy Connolly launched his career in Glasgow in the 1970s, honing his lines on his coworkers at the shipyards where he worked as an apprentice welder. His success encouraged generations to hit the stage, and today Glasgow is home to the Glasgow International Comedy Festival, the largest comedy festival in Europe.

Glasgow’s running gag is the statue of the 1st Duke of Wellington on his steed outside the Gallery of Modern Art. Instead of a hat, he sports a bright orange traffic cone. Some larrikin placed it there in the 1980s after a few drinks. The Glasgow City Council repeatedly tried to restore the duke’s dignity, but daring locals always climbed up to recrown him. The council gave in, and the cone lives on — a symbol of Glaswegian humor.

2. Glasgow’s Major Museums And Galleries Are Free To Visit

The palatial Kelvingrove Art Gallery and Museum features 22 themed galleries with 8,000 objects, from medieval suits of armor to Salvador Dali’s Christ of Saint John of the Cross (worth £60 million). I’m glad I took a guided tour of Kelvingrove’s highlights, or I’d still be there.

Glasgow is home to the Burrell Collection, one of the largest collections of artwork ever amassed by an individual. Sir William Burrell, a wealthy shipping merchant, collected everything from Chinese ceramics and tapestries to Rodin sculptures and Degas paintings, ultimately leaving it all to Glasgow. The site will reopen in the spring of 2021 after a £66 million upgrade, but highlights of the collection are on display at Kelvingrove.

The Riverside Museum was voted the European Museum of the Year in 2013. Architect Zaha Hadid’s wavelike design symbolizes Glasgow’s relationship with the River Clyde. Learn how Glasgow once thrived on industries like shipbuilding and locomotive construction. Clamber aboard buses and trains, and stroll down a replica of a 1930s street. Explore the tall ship Glenlee. In the summer, catch the free ferry to nearby Govan, a riverside district with a village vibe and traditional pubs.

Glasgow Cathedral was once the hub of the medieval city, and today this Gothic masterpiece is only a 15-minute walk from central Glasgow. Sir Walter Scott wrote about this kirk (Scottish for “church”) in his novel Rob Roy. The cathedral offers audio or pay-by-donation tours. The Bring up the Bodies option takes you through the cathedral’s burial grounds. On Sundays, visitors can rejoice in choral Evensong.

Just above the cathedral is the Glasgow Necropolis, a hillside cemetery modeled on Paris’s Pere Lachaise. Without climbing too far, you’ll get spectacular views over Glasgow. The huge cenotaphs and mausoleums were built for wealthy merchants. Many made their fortunes trading in tobacco before the American Revolution disrupted trade. The Friends of the Glasgow Necropolis offer guided tours by donation.

About 2.5 miles away is the University of Glasgow; founded in 1451, it’s the fourth-oldest university in the English-speaking world. Take the free tour with your camera at the ready. With its evocative towers and cloisters, it was used as a filming location for the television show Outlander.

The Royal Scottish National Orchestra, the National Theatre of Scotland, the Scottish Opera, the Scottish Ballet, and the BBC Scottish Symphony Orchestra are all based in Glasgow, offering many cultural events. Glasgow also boasts nightly live music in venues like the Barrowlands and Glasgow’s temple to rock, King Tut’s Wah Wah Hut. You can also experience free live music across town.

Students make up a significant proportion of Glasgow’s population, so the culture is hip and vibrant. The Gallery of Modern Art is the most-visited modern art gallery in Scotland, and there’s an exciting street art scene. Follow the mural trail or tour it with a local. Doctor Who fans can check out the iconic police boxes (the TARDIS) that Glasgow has preserved.

Charles Rennie Mackintosh (1868-1928) was an internationally celebrated architect and designer. There are lots of photos of this dapper fellow with his twirlable moustache scattered across Glasgow.

Like Frank Lloyd Wright, Mackintosh believed that architects should be responsible for everything, from the initial plans to the interior design. In some of his famous tea rooms, Mackintosh even designed the cutlery and the waitresses’ uniforms. His work, and that of his wife Margaret Macdonald, combined elements of the Arts and Crafts and art nouveau movements and became known as the Glasgow Style.

Mackintosh’s most famous building, the Glasgow School of Art, was gutted by fire in 2018, and Glaswegians must have felt like the Parisians did when Notre Dame went up in flames. But Glasgow still offers many Mackintosh gems. After a painstaking four-year renovation, the 1903 Mackintosh at the Willow tea rooms reopened in 2018 in time for the 150th anniversary of Mackintosh’s birth. There’s seating for 200, but the highlight is the Salon de Luxe, an intimate tea room with silver, gray, and pink accents and a mirrored frieze. Tours and meal packages are available.

Mackintosh believed a room should be a work of art, and at the Hunterian Museum, there’s a meticulous recreation of the interior of Mackintosh’s own home. The Style Mile, Glasgow’s high-end shopping area, is also home to a Mackintosh commission, The Lighthouse. Formerly the headquarters of The Herald, this building has a remarkable circular staircase, and visitors can enter for free. There’s an exhibition space, and you can purchase distinctive jewelry and scarves that incorporate Mackintosh’s flowing designs. The viewing platform (accessible by elevator) offers vistas over Glasgow. Paid guided tours are offered on Saturdays.

Other Mackintosh attractions include the Hill House and the House for an Art Lover, with its impressive cafe. See the Charles Rennie Mackintosh Society’s website for details.

6. Glasgow Preserves Its Industrial Past

While Glasgow’s cultural sector is booming, the city also prides itself on its industrial heritage. Guides on the hop-on, hop-off buses tell visitors about Glasgow’s illustrious shipbuilding legacy that includes both the Royal Yacht Britannia and the Queen Elizabeth 2 being built at the John Brown shipyard.

Tourists don high-visibility jackets and hats to tour Glasgow Central Station’s subterranean passageways and vaults. In 1916, the station platform became a temporary morgue where women came to identify what was left of their menfolk who had been killed on the Front.

To learn more about the women of Glasgow, visit the Glasgow Women’s Library, the only museum dedicated to women’s history in the UK. The library offers a program of walking tours and even bike rides. Or visit the People’s Palace, a Victorian-era building where there’s a replica of a tenement where a large family would live in one room.

Glasgow is the UK’s top destination for vegan food. And while you might not be a vegan, this shows how the locals embrace food trends.

There are some excellent fine-dining establishments as well. The Gannet, a new award-winning degustation restaurant, celebrates Scottish produce such as halibut caught off the Isle of Gigha and Cairngorm red deer game sausage. Rogano, Glasgow’s oldest operating restaurant, is modeled on the Queen Mary, an art deco ship launched on the Clyde in 1935. Hutchesons City Grill in the historic Merchant City precinct (where those 19th-century merchants had their fine houses) is decked out like an old-fashioned gentleman’s club.

There are also budget-friendly options. Glasgow is known as Scotland’s unofficial curry capital, and it offers great takeout options. And yes, Glaswegians will fry anything. Remember that scene from Parts Unknown where Anthony Bourdain, eating chips covered in cheese and curry sauce and downing an Irn-Bru, mutters, “I’m pretty sure God is against this”? He was at the University Cafe.

Glasgow is a great place to try local food. Look out for haggis served with bashed neeps (turnips). The Ubiquitous Chip, a 50-year-old local institution, serves meat and vegetarian options. It’s a good place for the squeamish (such as myself) who balk at offal. Also, look out for tattie scones, made from potatoes; cranachan, a dessert of whipped cream and fresh raspberries fortified by Scottish oats and whisky; and cullen skink, a thick soup made of smoked haddock. Bar Gandolfi serves a few of these options.

8. Glasgow Makes A Great Base

There are 90 golf courses in and around Glasgow. You are only 30 minutes from the famous Stirling Castle, and trains whisk you to the bonnie banks of Loch Lomond or to the seaside city of Ayr with its Robert Burns history in around 45 minutes. Glasgow also offers excellent access to the Scottish Highlands. The West Highland Railway Line from Glasgow is one of the world’s most scenic rail journeys.

I took a full-day bus trip to Fort William and Mallaig before boarding the Jacobite Steam Train to cross the Glenfinnan Viaduct (the Harry Potter bridge). All the Potterheads were so excited to be crossing the bridge that they blocked the train windows, but it’s another fascinating excursion easily accessible from Glasgow. 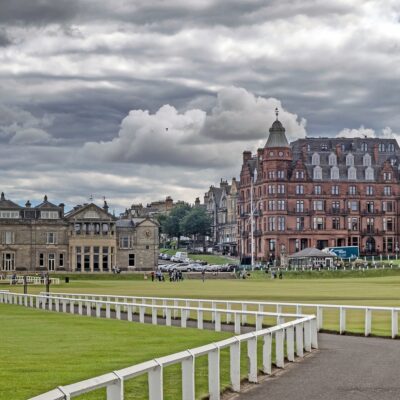 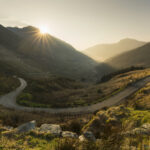