Salem, Oregon is billed as “the most Oregon part of Oregon,” and there’s no denying that the capital city boasts a remarkable number of things that the beautiful Pacific Northwest state is known for.

Along with being the center of state politics as the capital of Oregon, Salem sits amid the Willamette Valley, its world-famous wineries, and it is bisected by the beautiful Willamette River.

Salem is also conveniently located less than a two-hour drive from the state’s scenic Pacific Coast and is within a one-hour drive from Oregon’s largest city of Portland. Add to that the varied agriculture — from dairies to organic vegetable gardens to orchards — that is going on all around the region, and you have a community that is bursting with fun things to do and tasty things to eat and drink.

On my recent visit to Salem, I was delighted to discover all that Salem has to offer, as well as the seemingly endless day-trip possibilities.

Here are nine fantastic things to do in Salem, Oregon.

Lush green meadows, leafy plum trees, and flowers, both wild and landscaped, are in store at Riverfront Park, Salem’s premier urban event park. Located along the banks of the Willamette River, the park also offers plenty of scenic shorelines.

The park is a wonderful example of creative redevelopment of an area that once housed industrial uses such as paper, flour, and woolen mills, as well as a coal gasification plant and an auto junkyard.

Today, the 26-acre Riverfront Park offers plenty of amenities, such as picnic shelters, playgrounds, a splash pad, and restrooms. In addition, the park boasts the cool EcoEarth Globe which is made up of hand-painted tiles to replicate the world, and the lovely Peter Courtney Minto Island Bicycle and Pedestrian Bridge, which connects the Riverfront Park area to the Minto-Brown Island Park.

The Riverfront Park area is also home to the Willamette Queen Sternwheeler, a twin paddle-wheeler that is reminiscent of the vessels that were once the main mode of transportation on the Willamette River. On select days, passengers can board the riverboat for a ride on the Willamette. Lunch, dinner, and Sunday brunch cruises are also available. Price and schedule information is available here.

Another fun feature of the riverfront area is the whimsical Salem’s Riverfront Carousel, a hand-crafted, old-world-style carousel that was created for the Riverfront Park area by the community in the early 2000s. The carousel opened for business in June 2001 and 300,000 people came the first year to take a magical spin on the carousel.

The original carousel featured horses and a zebra design, but other characters have been added through the years, including a frog, a llama, a giraffe, and a deer.

Salem was founded in 1842 and its downtown reflects its long and rich history. The area is listed on the National Register of Historic Places and consists of dozens of historic buildings that house boutiques, antique shops, cafés, and vintage diners.

Among the features to check out downtown is the Elsinore Theatre, which opened in 1926 as a silent film house and vaudeville venue. The theater’s design was inspired by European castles and it was said at the time to be the most beautiful theater in the west. Today, it offers a range of entertainment options.

The downtown also offers a robust selection of places to dine, including the intimate tapas spot Cozy Taberna, the casual Cajun, Creole, and Southern-cuisine Noble Wave Louisiana Kitchen, and the fine-dining new American-cuisine spot in the heart of Salem, Epilogue Kitchen and Cocktails.

Spread over 1,200 acres, Salem’s Minto-Brown Island Park offers a wide selection of terrain and activities — from grassy and wooded areas to waterfowl and wildlife sanctuaries, to a large open dog park.

The park also features a network of 29 miles of trails in nine loops. The well-maintained and well-signed trails traverse shady areas and make for great routes for walkers, runners, and cyclists. Along the way, it’s not unusual to spot blue herons, ospreys, squirrels, and rabbits. In the summer, trail users might find marionberry vines loaded with ripe berries — a fun and tasty bonus on a hike or bike ride.

The park’s 30-acre designated off-leash dog area provides plenty of room for dogs to run, play, and interact with other dogs, as well as trees and picnic tables for dog owners to relax in the shade.

Topped by the gilded statue of the intrepid Oregon Pioneer, the shining white-marble Oregon State Capitol sits amid a mall that features three fountains, a state heritage tree, flowers of virtually every color in the rainbow, and large expanses of green lawn.

Sporting a definite park atmosphere, the grounds make up the State Capitol State Park, one of Oregon’s 361 state parks. The capitol, which was built in 1938 during the Great Depression, is an example of Modernist Art deco design. The Oregon State Legislature website notes that the location of Oregon’s capital city had a tumultuous history, moving from Oregon City to Salem to Corvallis, and then back to Salem.

Information about touring the interior of the capital is available here. Note that in the summer of 2022, when I visited, construction was underway at the capitol, and access was limited. Even if you don’t go inside, walking the grounds and taking in the flowers, statues, and views of the capitol building makes for an enjoyable outing.

Pro Tip: To extend your capitol mall stroll, head next door to the beautiful Willamette University campus, which is worth a walk-through for its numerous picturesque historic buildings and garden-like setting.

For an opportunity to get your feet in the sand, I highly recommend taking a day-trip drive to the Pacific Coast. The scenic Cape Lookout State Park is an hour-and-25-minute drive from Salem and offers all of the wide sandy beaches and unique rock formations that you could hope for on an Oregon Coast visit.

The park includes a popular campground and day-use area and is located on a sand spit between Netarts Bay and the ocean. It is a prime destination point along the Three Capes Scenic Loop. Along with camping and beachcombing, Cape Lookout also features numerous hiking options. A trail guide is available here.

Pro Tip: If you’re looking for picnic fare along the way, be sure to stop in at the famous Tillamook Creamery where you can sample numerous cheese varieties, as well as ice cream and snacks. Tours of the creamery are also available.

7. Oysters At The Shore

For another classic ocean-picnic option, consider stopping at one of the Oregon Coast’s oyster farms, where fresh oysters are available for shucking and enjoying.

One popular spot that is just a few miles from Cape Lookout is the Nevor Shellfish Farm, where guests line up to take their pick from seafood specialties like petite or medium oysters, smoked oysters, clam chowder, and shrimp cocktails.

Remember to bring your oyster-shucking knife because the oysters come out unshucked in a bag of ice. Picnic tables are available for casual al fresco dining.

With fields of hops, orchards of apples, and vineyards of grapes growing all over the Willamette Valley, the brewery, cidery, and winery options abound in Salem.

Visitors could easily spend days exploring breweries such as the British sports pub-themed Santiam Brewing and the Latin American-themed Xicha Brewing. You could also visit the hard cideries such as Wandering Aengus, one of Oregon’s first craft cideries, and La Familia Hard Cider, a new addition to the region’s artisan cider producers.

Salem also sits in the center of Willamette Valley wine country. Wine tasting here is a not-to-be-missed experience. For ideas on where to sample some of the region’s famous wines, check out this article.

For long-distance bikers looking for a unique way to take in the countryside, the Willamette Valley Scenic Bikeway runs through the Salem area and offers a great introduction to the bounty of Oregon.

The scenic route consists of 134 miles and is rated as moderately difficult. The bikeway follows its namesake river and winds through the Willamette Valley, passing by fields of hops, vineyards, and quaint towns. The northern part of the trail takes in the Champoeg State Heritage Area before heading to Salem. The route also passes the Willamette Mission State Park and the Ankeny National Wildlife Refuge. Other towns along the way include Albany, Corvallis, and Brownsville.

Pro Tip: If you happen to be in Salem during late August/early September, be sure to check out the Oregon State Fair, an annual multi-day extravaganza that combines uniquely Oregon foods, crafts, and agriculture with a huge assortment of carnival rides, games, and world-class entertainers. 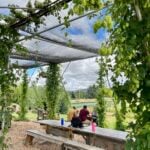