Positioned in the northwest corner of Michigan’s Lower Peninsula, Traverse City, Michigan, sits on Lake Michigan’s Grand Traverse Bay. Because Michigan sits among four of the five Great Lakes, you’ll find a wide variety of fish on the menus, including whitefish, walleye, and salmon.

Since Traverse City sits on the 45th parallel, as do the wine regions of Italy and France, the Traverse City area possesses a microclimate that produces some of the best wines in the United States.

So, even if you’re not a foodie or wine connoisseur, you’ll enjoy the fresh local food scene in Traverse City. While you’ll find many wonderful restaurants in Traverse City, here are seven, — from fine dining to drive-ins — in no particular order, that I highly recommend.

Located in The Village at Grand Traverse Commons, the award-winning Trattoria Stella sits in the cellar of a 100-year-old building that was once the Traverse City State Hospital. The exposed yellow brick walls of this building ooze with history. To learn more about the Commons’ history, you can take a guided tour. The family-run restaurant has a friendly atmosphere for romantic dinners for two or large family dinners, children included.

The Trattoria features sustainable, fresh, local ingredients. At the top of the menu, which changes daily, it lists the farms from where it sources its ingredients. So, you’ll know exactly which local farm the sweet corn or blueberries came from. Trattoria Stella makes its cheese, bread, and pasta in-house, so you’ll want to try one of the dishes featuring those items. The restaurant is well-known for its house-made burrata.

I particularly enjoyed the bruschetta. The bruschetta wasn’t the typical tomato version. One day I had it, and the crostini was spread with creamy house cheese, topped with a mixture of chopped cherries, for a beautiful Michigan-themed bite. I’ve also had it with fresh Black Mission figs, candied hazelnuts, caramelized onions, and pecans, drizzled with a balsamic glaze. Remember, its menu changes daily, so what I had may not be on the menu, but you’ll find something equally wonderful.

Pro Tips: For those who prefer open-air seating, you can order your food to go and eat your dinner alfresco at one of the tables the Village at Grand Traverse Commons had added to its grounds. Reservations are the best option for Trattoria Stella. Unfortunately, it’s closed on Tuesdays.

The tacos come one per order so that you can select exactly what you want from six varieties. It offers steak, chicken, al pastor (pork), fish, shrimp, and a vegetarian black bean variety.

Be sure to try the street corn, which is grilled and topped with lime mayo, and chile cotija cheese. The churros with Mexican chocolate sauce make a tasty dessert.

Pro Tip: Don’t arrive when you’re already famished. Mama Lu’s doesn’t take reservations, and the restaurant is relatively small. Instead, plan to arrive early, add your name to the waitlist, and explore downtown until your table is ready.

Sleder’s Family Tavern opened in 1882 and is Michigan’s oldest continuously operating restaurant. Established more than 100 years ago, the restaurant has a historic atmosphere. Throughout the restaurant’s long history, the owners preserved the building’s original charm. For example, the original 21-foot solid mahogany bar still stands along the restaurant’s east wall, serving your favorite cocktail. The only change to the original antique lamps is the conversion from gas to electricity.

It is well-known for its fish fry in several varieties, including lake perch, cod, and Canada smelt. If you aren’t much for fish, the menu features beef or buffalo burgers ground fresh daily. Soups, salads, and sandwiches are also available.

Located on Highway 31, across from the beach, Don’s Drive-In’s pink building and award-winning neon sign are difficult to miss. Don’s has been in business since 1958, so it’s a real 1950s-style drive-in with neon signs and carhops. In the summer, it offers outdoor dining on picnic tables and carhop service in addition to the indoor sit-down restaurant.

The award-winning milkshakes and burgers take you back to the ’50s. What I love are the fruit milkshakes or malts, with actual pieces of fruit mixed in. But, of course, this is Traverse City, so it has one with cherries, then the drive-in offers strawberry and a special blend that rotates.

The burgers come in a variety of sizes with whatever toppings you like. In addition, it is cooked to your desired doneness, unlike traditional fast-food places. If you’re not in the mood for a burger, the menu also offers hot dogs and a variety of sandwiches like grilled cheese, tuna, or even a Reuben.

Don’s is famous for deep-fried pickle spears, so give those a try for something different than the traditional French fries.

Pro Tip: Don’s is the perfect place to have dinner after a beach day. Grab a picnic table and enjoy your meal. It won’t matter if you’re damp and sandy.

Known for its Latin American food, Red Mesa Grill celebrates South American, Central American, Mexican, and Caribbean food. It kicks off the fiesta with house-fried white corn tortilla chips and salsa with a bit of heat. Accompany those with one of the flavored margaritas that people talk about—sour cherry, peach, mango, strawberry, and traditional, to cool down the salsa.

While you’ll find traditional Mexican tacos, burritos, and enchiladas on the menu, Red Mesa Grill is the place to branch out and try some other Latin American dishes. Its Cuban black bean cakes are one dish to try. The black beans are simmered with vegetables, spices, and herbs and formed into a cake and fried. Jalapeno cream, red pepper cream, and roasted corn salsa accompany the dish. It is served with vegetables and rice.

The Caribbean shrimp tacos and the Brazilian hanger steak are two other dishes to expand your Latin American food horizons. If you have special dietary needs, you’ll appreciate that the menu marks items it will make gluten-free, vegetarian, or vegan options.

Pro Tip: The dog-friendly seasonal patio is open Memorial Day through Labor Day but call ahead for availability.

With views from the 16th floor of the Tower, Aerie Restaurant’s wrap-around floor-to-ceiling windows feature stunning views. The restaurant feels like a place for celebrations, with white tablecloths and stemware. The chefs use local ingredients so that you have a taste of northern Michigan.

The Aerie salad starts with organic field greens and builds up with cucumbers, pickled red onion, and Gorgonzola cheese. Then it adds some candied pecans for crunch and Traverse City tart cherries with a cherry vinaigrette. While it is a house salad, it showcases Michigan.

I enjoy the steaks at Aerie, where the six-ounce filet cooked to order comes topped with a green peppercorn bordelaise sauce. The dish features diced potato, candied bacon, and roasted onion. Another favorite is the braised and blackened salmon. Vinegar and chive fried potatoes, smoked tomato jam, chimichurri, and a charred lemon accompanies the dish.

For dessert, I always look for something with cherries. The Traverse City cherry toffee pudding cake with candied cherries and toffee sauce was a standout.

Pro Tip: Check the time the sun sets on the day of your visit and make reservations early enough to enjoy the view of Grand Traverse Bay. Then end your meal at sunset, especially if you’re planning a romantic dinner.

Located on the water of Grand Traverse Bay, Apache Trout Grill features a stunning view that you can enjoy along with a cocktail on the outdoor patio while waiting for your table. This pre-dinner cocktail hour is so enjoyable, you won’t want your table to be ready anytime soon.

Pro Tip: While drinks can be served outside, the restaurant doesn’t offer outside dining, and doesn’t take reservations.

Other Michigan experiences you will want to try: 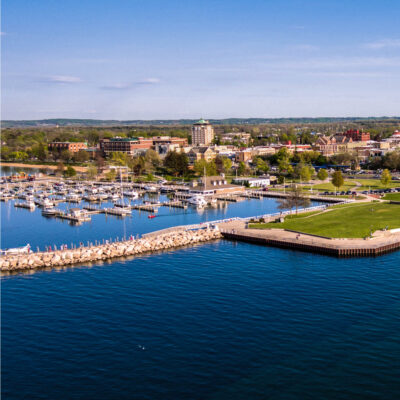 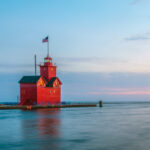 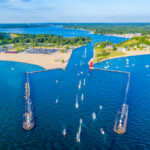