4 Reasons To Visit Breckenridge, Colorado In The Fall

The fox’s eyes were the color of golden lager, liquid with warm bronze and a weirdly calm curiosity. Copper-colored and lean as an aspen, the fox peeked over the small stone ledge on Ridge Street in Breckenridge, Colorado, that paralleled the sidewalk I was walking on.

We were an arm’s length apart, and I thought he was a pet dog at first, until that wildness in his long, slender face and sunset eyes howled loudly in its gaze. My knees went weak, and I smiled.

In my short-hosted trip to Breckenridge — one of the highest towns in Colorado at more than 9,000 feet — I had already seen a mama moose with her calf grazing along the Boreas Pass high above this resort town, and I had squealed at the darting playfulness of the hyper little chipmunks.

I skipped through alpine meadows dotted with the pink, white, red, and blues of wildflowers and giggled at fat little mountain bees slumbering on the puffy centers of Colorado daisies.

Breckenridge is one of the nation’s premier year-round destinations, but it’s especially known for the winter activities when the ski slopes and winter sports lure thousands to this adventurous mountain community.

But summer, and especially fall, are also ideal times to discover this historic, Gold Rush town. Dubbed “the first to Fall,” Breckenridge’s high altitude environment means the leaves of the aspens — the Rocky Mountain Maple and Boxelders — change their colors sooner than other places in the U.S.

Cooler temperatures, fewer crowds, and the golden hue of thousands of aspen groves — as well as more outdoor adventures and cultural discoveries than you can imagine — make Breckenridge, Colorado the perfect destination for fall.

Here are four reasons to visit Breckenridge this fall.

1. The Changing Of The Leaves

Fall is a popular time for leaf-peeping all over the U.S., but in Breckenridge, those aspens start to glow with a golden hue as early as September, making early fall arguably the most beautiful time of year to visit Breckenridge.

The green spruce, fir, and pine-covered peaks of the Colorado Rockies become dotted with golden yellow, bright orange, and fiery red as the groves of brilliant aspens change colors.

With the bright candy-blue of the skies and the soaring peaks of the Tenmile Mountain Range in the background, visitors flock to the trails and take leisurely scenic drives to see the vibrant colors of the green, orange, and yellow that lights up the season.

One nice area to view the changing of the colors is the French Gulch pass through Breckenridge’s “Golden Horseshoe.” This area became famous for its gold, which was discovered in the area in 1859, launching Breckenridge into Gold Rush notoriety.

Hiking and mountain biking are the most intimate ways to see the fall gold, but another scenic drive is the Boreas Pass, which starts in Breckenridge and weaves over 11,400 feet to the top of the Continental Divide.

Book at least an hour for this stunning drive to gawk at the Aspen Tunnel and the jaw-dropping vistas of the surrounding valleys and peaks. Much of Boreas Pass turns to a graded dirt road, but it should be fine for most vehicles.

Although the scenic drives are well worth it, Breckenridge has a more eco-friendly promotion called B like Breckenridge. This stewardship initiative encourages locals and visitors alike to “use less, walk more, leave no trace, stick to the trails, respect wildlife, nature, and each other.”

With the hundreds of hiking and biking trails in the area, you don’t need a car to get around and see the fall colors. Even in downtown Breckenridge, the Main Street & Blue River Plaza Rec Trail lets you walk around historic Main Street and downtown Breckenridge, while the Blue River Trail — a single-track trail that parallels the Summit County Bike Path — gives visitors river access and scenic views of the Tenmile Range.

To keep moose – and you – safe, don’t approach, chase, follow, surround or feed them, and always observe from a distance. In the event of a confrontation with an agitated moose that begins to charge, Colorado Parks & Wildlife advises people to run or move away as fast as possible and try to put a large object between them and the moose, such as a boulder or tree.

Foxes in Breckenridge are typically unafraid of humans and can be bold due to their association of humans with food. Although foxes are cute, please do not feed them!

Fall festivals are back and Breckenridge has a slew of fall fun to experience, starting in September. The season kicks off with Breckenridge Wine Classic in September, which features master sommeliers, chefs, and winemakers inviting you to wine and dine under Breckenridge’s fall colors.

The Breck Film celebrates its 40th Anniversary in September as well, and this year’s festival features film screenings, parties, and outdoor viewings. This year’s films will be screened in person across three theater venues in Breck with multiple party venues each night.

Breckenridge also hosts Brecktoberfest and the Fall Family Fair in September, but this year’s event will be more downsized. Breckenridge brings German beer and culture, as well as fall-themed beers from around Colorado to the Rockies during the ticketed Brecktoberfest, held at the Riverwalk Center and lawn. This year’s event will require tickets and are on sale now at GoBreck.com. Your ticket will include a reserved three-hour session, one half-liter stein, and two beer tokens.

The free Fall Family Fair, however, will be held in Breckenridge’s award-winning arts district, and Breckenridge’s culinary community will host the Oktober-FEAST at the same time.

Sip the taste of the mountains during the Breckenridge Craft Spirits Festival in October, which celebrates Colorado’s finest distillers. Breckenridge becomes a distilling mecca with one-of-a-kind experiences planned throughout the weekend, starting with The Still on the Hill Grand Tasting, held at the Riverwalk Center.

You don’t have to wait for the Craft Spirits Festival to sip the taste of the Rockies. The Breckenridge Distillery is the world’s highest distillery and restaurant that serves up Chef Burke’s patented 40-day dry-age process steaks. Tours and tastings are scheduled daily on Airport Road, and the new Breckenridge Distillery’s Founder’s Lab Blending Experience lets you nerd out with the distillers to become a master blender. You can learn how to aggregate flavors while building a whiskey blend, then hand bottle your creation, and complete the task with a customized label.

3. Fall Hiking And Biking In #GoBreck

The best way to get up close and personal with the aspens and fall colors is by foot or by pedal. In fact, Breckenridge’s mining history and stellar views can be experienced on more than 60 miles of interconnected trails.

Hiking, mountain biking, and horseback riding are serious activities in the mountains here, and many of those trails are accessible from downtown Breckenridge. One of my favorite hikes that I did one afternoon was on the trails that start in Carter Park on the south end of town.

While the park itself has a short and pretty scenic trail, cyclists and hikers can challenge themselves on the Hermit Placer Trail, which connects via Jack’s Cruel Joke (careful, it earns its name) and the flat meadow Sunbeam trail.

The Sawmill Trail is also a pleasant 1.5-mile hike that begins at the bottom of the Snowflake Lift near the ski resort.

The biking trails range from the easy flat River Trail and Lower Flume Trails to the most extreme Colorado Trail and the Breckenridge “B Line,” which is full of jumps and bermed turns to test your skill. The Town of Breckenridge and Summit County Open Space recently constructed the new River Park on the north end of Breckenridge, and Colorado Adventure Guides can teach visitors of all ages new mountain bike skills through a variety of mountain bike clinics for all skill levels.

I could write an entire book about the hiking trails around Breckenridge because there are so many. Stop in at the Breckenridge Welcome Center to get a trail map before starting your outdoor adventures.

History buffs can also opt for a guided hike with the Breckenridge Heritage Alliance. For a real adventure or a guided excursion up some of the peaks and hidden gem locales, opt for an adventure guide with Colorado Adventure Guides. These highly-trained guides can lead you on mountaineering adventures, rock climbing, peak ascents, and more!

You don’t need a car in Breckenridge. The town prides itself on the free Downtown Trolley System and the Free Ride bus shuttles that can pick you up and drop you off all over town and beyond. Bike rentals are in no short supply here as well.

This massive wooden friendly troll giant was originally built as a part of the annual Breckenridge International Festival of Arts (BIFA) by the Danish artist Thomas Dambo, and today, it’s one of the most popular sights in the community.

Because he’s so popular, the trail to visit Isak becomes clogged with visitors during the peak seasons. Shoulder season times like fall can be the best times to visit towns like Breckenridge because the summer crowd has come and gone, and the winter crowd has yet to converge.

Although the crowds have receded, the shopping and vibrant life around Breckenridge doesn’t cool off. Take your time exploring the shops along Main Street, like The Mountain Goat Clothing Co., Magical Scraps, Belvidere and Hern, Outsider, The Fresh Soap Company, and the Cheese Shop of Breckenridge.

Take a ride from town to the Peak 8 Base Area on the free BreckConnect Gondola, which is a quick and scenic 10-minute ride to the base of Peak 8, where you can look over the peaks and valleys to spot fall colors.

Fall is one of the best times of the year to learn (and enjoy) how to fly fish. This sport soared in popularity during the pandemic, said our friend Austyn Dineen, public relations director for Breckenridge Tourism Office.

With golden scenery and cooler weather, fall is the perfect time to cast a line in the Blue River, which runs right through the town of Breckenridge and is full of trout. Breckenridge Outfitters offers a variety of fly fishing classes from 101 and fly tying to intermediate and women’s clinics, as well as guided excursions.

United Airlines teamed up with Landline, a ground transportation service, to make it easier for customers to travel to Breckenridge with a year-round ground transportation service connecting through Denver International Airport, so there is no need for a rental car. You just book your transfer through United and your luggage is taken straight to the bus from your arriving flight.

For more things to do in Breckenridge, visit these links: 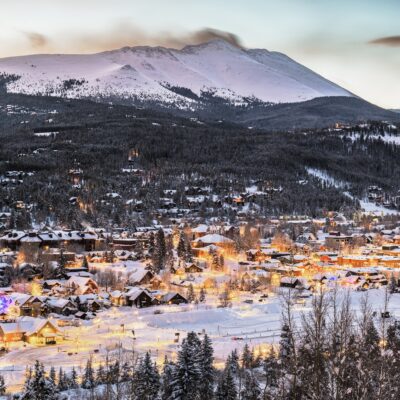 Breckenridge11 Best Things To Do In Breckenridge, Colorado During The Winter 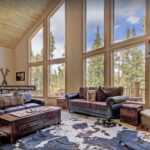 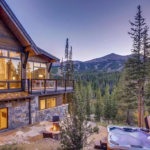 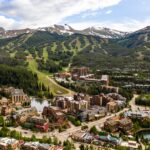