On May 26, 1863, road-weary prospectors, who had yet to strike it rich, panned for gold in Alder Creek before stopping for dinner. They hoped to find enough gold to buy tobacco once they reached civilization again. They found enough for tobacco and then some.

The Alder Gulch discovery would constitute one of the biggest gold strikes in North America. From 1863 to 1889, $90 million (worth about $9 billion today) in gold came out of Alder Gulch. And within a year, nine mining camps would line Alder Creek. Shops, saloons, an assay office, and a bank to hold all that money would eventually line the boardwalks. Virginia City would become Montana’s territorial capital and wood, stone, and brick buildings with glass windows would replace miners’ tents. My great-great-great-grandfather, Dr. Byam, would open his medical practice in Nevada City.

Of the nine original towns, only Virginia City and Nevada City remain. These two towns could easily have gone the way of the other mining camps, disappearing forever. But in the late 1940s, Charles Bovey began to buy and restore the area’s buildings. The larger Virginia City was named a National Historic Landmark in 1961. It, and neighboring Nevada City, became living museums.

Here are the best things to do in legendary Virginia City, Montana:

Shops, restaurants, galleries, and a hotel line Wallace Street, Virginia City’s main thoroughfare (Highway 287). All are housed in historic buildings. As you stroll along the wooden boardwalks, you’ll not only see a place to grab a bite to eat or get an old-timey portrait, but also see blacksmith shops, an 1863 barbershop, and the Montana Post that printed the territory’s first newspaper beginning in 1864. This outdoor museum mingles with present-day businesses.

Signs identify each building and tell a bit about its history. Those that have become part of the museum contain artifacts from their early days so expect to see period clothing, canned goods with original labels, and fortune-telling machines in the Gypsy Arcade. Virginia City and neighboring Nevada City contain the second-largest collection of Old West artifacts in the U.S. after the Smithsonian Institute.

Pro Tip: You can download a map here. A walking tour highlights Virginia City’s historic buildings, homes, and churches and provides information on their background.

An 1890s livery stable found new life as the Opera House in 1949. Each summer, the Virginia City Players, Montana’s oldest professional acting group, entertains visitors with a two-part show — melodrama and vaudeville. These are family and dog-friendly shows, with the adult humor designed to go over the little ones’ heads. Yes, you can bring your dog (provided he or she doesn’t bark).

The Brewery Follies features two shows daily during the summer. Geared toward an adult audience, expect to enjoy some comedy, music, and maybe a Montana-made microbrew.

Virginia City and Nevada City were boomtowns. Their population grew to several hundred within a couple of weeks of the gold discovery.

Lawlessness followed, arriving before the lawmen did. The first legal system, a miners’ court, met, tried, and decided the verdicts of criminals in the early days with input from the townspeople. When the sheriff arrived, he was lured to the dark side. He was suspected of tipping off robbers to the route and timing of gold shipments out of Alder Gulch to Bannack, a larger, established town 80 miles away. A group of men, called vigilantes, formed and met secretly to clean house after about 100 people were killed during robberies in the fall of 1863. Sheriff Plummer didn’t escape them.

On Wallace Street, vigilantes reportedly met in the Kiskadden building and hung five men, convicted of robbery and murder, in the Hangman’s building days after they hung Plummer.

The Hangman’s building was later repurposed as the Virginia City Water Company. A plaque tells of the water company’s owner, Sarah Bickford. Born into slavery, she came to Montana after she was freed and became the first African American woman to own a utility company in the U.S.

In Nevada City, vigilantes met in Dr. Byam’s office that still stands on Highway 287. You can look into the ground floor parlor and doctor’s office.

If you’re curious about the final resting place of five outlaws hung by the vigilantes in 1864, head up to Boot Hill cemetery. There you’ll see five wooden grave markers and occasionally a cowboy boot left in lieu of flowers. The graves were unmarked until 43 years later.

On the opposite side of the road, you’ll see the rodent agent graves — a spoof on the human ones. Local resident and friend, Angela Mueller, maintains these miniature markers. Pay a visit to learn about their crimes.

Pro Tip: Follow signs to the Virginia City cemetery. The road branches. Take the road to the left (west). The gravel road is well maintained.

Along with the historic buildings and their displays that constitute an entire town museum, Virginia City has two museums to check out.

The J. Spencer Watkins Museum is full of photos and artifacts from Virginia City’s early days including a printing press, a gun collection, old photographs, and a sheepherder’s wagon.

The Thompson-Hickman Museum also has a large collection of historic photos, information on the mining dredge that wreaked havoc with the landscape but unearthed the harder-to-find gold, and artifacts from Virginia City’s Chinatown. In 1870, a third of Virginia City’s population was Chinese men, working as miners, in service industries, and running gambling parlors. A couple of oddities like a petrified cat and a replica of Clubfoot George’s clubfoot (vigilantes hung him and buried him on Boot Hill) are definitely out of the ordinary.

You can give your feet a break and view the city from a stagecoach with Vigilante Carriages. On your narrated 30-minute tour, you’ll learn about the Alder Gulch as you head to the spot where gold was discovered.

Pro Tip: Tours are first-come, first-served, and leave from Wallace Street near the Opera House.

Larger groups can be accommodated on the historic Fire Engine Tour, a 35-minute narrated tour that runs from May through late September.

Pro Tip: They can accommodate some guests with mobility issues. Please call for more information.

7. Hop The Train To Nevada City

The Alder Gulch Shortline Railroad connects Virginia City to Nevada City. You can begin your 15-minute narrated trip at the historic train depots in either town. The train passes old mining equipment, a gold-panning attraction, and a small lake popular with fishermen and picnickers.

8. Step Back In Time In Nevada City

The Montana Historical Commission’s Nevada City Living History Museum allows you to mill around a restored Old West town. As you tour the cabins, houses, shops, and schoolhouse, you can learn about 1870s Nevada City with reenactors in period costume. They demonstrate spinning, broom and basket making, and changing a wagon wheel.

For an immersive experience, you can stay in one of the cabins or tents overnight, wear period costumes, do chores, and cook over the campfire with the reenactors guiding you along the way.

Pro Tip: Enter the museum through the music hall. Most buildings at the museum are wheelchair accessible. For a living history experience with reenactors, plan to visit on weekends from Memorial Day to Labor Day.

9. Try Your Hand At Mining

You can learn more about gold mining and give it a try at the River of Gold on Highway 287 near Nevada City. While you probably won’t find gold, you have a great chance of finding garnets both here and at Red Rock Mine and Garnet Gallery in nearby Alder, Montana.

Pro Tip: No worries if you don’t have any mining experience. You’ll get a demonstration and help along the way.

No trip to Virginia City would be complete without browsing in the shops that line Wallace Street. The Dancing Buffalo Gallery (in the train depot), Ranks Mercantile, and Ruby Chang’s Gift Shop are my favorites.

Pro Tip: The nearest large commercial airport is near Bozeman, Montana, 66 miles away. If you are adding a trip to Virginia City to your Yellowstone National Park expedition, West Yellowstone is 85 miles away.

Virginia and Nevada cities are summer destinations. Attractions open in May and begin closing after Labor Day. For more information, including package deals, visit the Virginia City/Nevada City website.

Look beyond Montana’s rugged beauty and discover its rich and remarkable history: 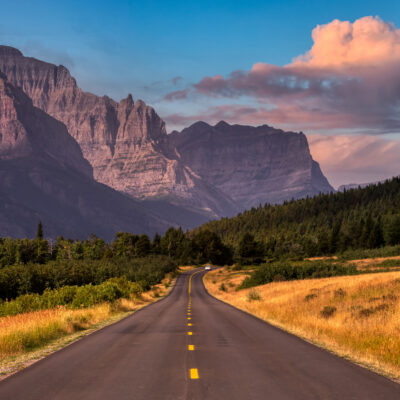 Montana12 Unique Spots You Can Only Visit In Montana

MontanaHow To Spend A Perfect Day In Quaint Philipsburg, Montana