7 Fabulous Reasons To Visit Yellowstone National Park In The Fall

Yellowstone National Park, our nation’s first national park, is larger than Rhode Island and Delaware combined. More than half of the world’s active geysers lie within the park’s 2.2 million acres. And the greatest concentration of mammals in the lower 48 states calls Yellowstone home.

Until recently, Yellowstone was less than 3 hours from my house — a drive I took so many times I lost count. I went with friends, family, out-of-town visitors, and if I had no takers, I went by myself. Living so close, I had my pick of times to visit Yellowstone. The sweet spot is the last week of September or the first week of October.

Typically, over 900,000 people visit Yellowstone in July alone. The traffic is heavy, even without a bison jam or bear sighting. Despite the park’s massive size, there are relatively few roads to reach attractions and not enough parking for all the summer visitors, who can enter in unlimited numbers.

October sees significantly fewer visitors than July does and for that, the animals and rangers breathe a sigh of relief. With the park winding down for winter, though, you’ll need to plan ahead.

Pro Tip: Whether you make your home base within the park or at an entrance town, travel between attractions takes a lot longer than you’d expect. The maximum speed limit in the park is 45 miles an hour, and slower in many spots. It’s plenty fast with the wildlife and scenery you’ll be looking at.

2. The Bull Elk Are Bugling

Elk congregate around Mammoth Hot Springs near Gardiner and along the Madison River in the western section of the park. Autumn brings competition among bull elk for the cows before breeding season (called the rut), and bugling is a sign the competition is ramping up. Prime bugling time occurs between mid-August and early October.

Bull elk bugle to attract females and deter other males from entering their territory. The bugle starts with a low guttural sound, then a high-pitched whistle, and ends with a deep throaty sound. The bull may tack on a few yelps or barks after the bugle.

You may see a pair of bull elk spar or battle outright for control of a harem of cows. They don’t grow massive antlers each year for decoration (they shed the antlers each spring and regrow them through the summer). If you see a bull elk rubbing his antlers against a tree, he’s doing two things. He’s removing the blood-vessel-rich velvet from the antlers and sharpening them for battle.

Most bugling starts at dusk and ends at dawn, so hit the road in the early morning and let your ears lead you to the action.

Pro Tip: Give these 700-pounders a wide berth. Elk will ram a car if you invade their space. Safely watch bears and wolves from 100 yards away and all other wildlife from 25 yards away.

3. The Fall Foliage Is Stunning

While the foliage can’t compare with that found in the hardwood forests of the Eastern United States, hillsides of golden quaking aspens shimmer and red-leafed huckleberry bushes light the valleys of Yellowstone on fire. The best time to see the fall colors is mid-September through mid-October.

If the leaves aren’t turning yet in the park’s valleys, head to higher elevations (and cooler temperatures) to see the colors. With an elevation of 8,878 feet, Dunraven Pass is a great choice for seeing autumn colors and sweeping views.

Pro Tip: Yellowstone has extreme weather that can change quickly. You may start with snow in the morning but reach afternoon highs in the low 60s. Dressing in layers works best.

4. The Roads Will Likely Still Be Open

The National Park Service publishes a schedule of seasonal road closures each year online. Most roads close by early November, leaving only the road between Gardiner and Cooke City, Montana, open, so its year-round residents have access to the outside world.

Pro Tip: If the Blacktail Plateau Road between Mammoth and Tower Junction is open, take the 30-minute detour. It is a decent gravel road that offers panoramic views of the mountains. Elk and deer graze there often. It’s closed with snow or bear activity.

5. You’ll Get A Front-Row Seat For The Hydrothermal Shows

The geysers, mud pots, hot springs, and fumaroles erupt, bubble, boil, and steam whether they have a standing-room-only audience or not. The bonus of visiting Yellowstone in the fall is that you’ll likely have a front-row seat. Your chance of seeing Old Faithful rather than the back of someone’s head is very good.

Steamboat Geyser, the world’s tallest active geyser, started erupting again but not with any regularity, unlike Old Faithful, whose eruption time is about every 90 minutes. Steamboat, located in the Norris Geyser Basin, throws mud, water, pebbles, and steam 300 to 400 feet into the air. Cars parked in the lot several hundred feet away are not immune to Steamboat’s wrath.

Pro Tip: Most of the park’s hydrothermal features are easily accessible by boardwalks. Exploring Norris Geyser Basin involves a steep descent in and climb out. Viewing the entire basin from a platform at the trailhead is just as rewarding. For estimated Old Faithful eruption times, check out the park’s geyser app or Twitter feed.

The park’s hotels and campgrounds fill a year in advance for the summer months. You’ll still need to make reservations for fall trips, but rooms are available on shorter notice and for lower prices, especially during the two weeks before the lodges close for the season.

Pro Tip: The National Park Service publishes a schedule of fall closures for campgrounds and lodging. You can make reservations online using this link for the current and following year.

7. The Wildlife Is More Active

Cooler weather means that the wildlife is more active during the day. Fewer people, cars, and buses spooking the animals give you a chance to see them without leaving the highway.

Bison are literally everywhere, including on the road. You’ll spot North America’s fastest animals, pronghorn antelope, near the Gardiner entrance and Lamar Valley. Grizzlies and black bears are particularly busy foraging before they hibernate and can be seen in Hayden and Lamar Valley. Bighorn sheep stay in the mountainous areas, so they are harder to spot.

Wolves, too, are elusive. Eight different wolf packs live in the Greater Yellowstone Ecosystem. The best way to see them is with a spotting scope or binoculars in the Lamar Valley. Joining a tour group that actively tracks the wolf packs increases your chance of seeing them in the wild.

For an up-close view of grizzlies and wolves, you can visit the Grizzly and Wolf Discovery Center in West Yellowstone. It has educational programs and a taxidermied grizzly so you can see just how intimidating these apex predators are.

If you haven’t spotted wild grizzlies within Yellowstone and don’t mind a side trip, go to Tom Miner Basin. From Gardiner, take U.S. Route 89 heading north. At mile marker 17, head west, crossing the Yellowstone River. The gravel road to Tom Miner Basin will then head south. Begin to look for grizzlies about 8 miles after you leave the highway. The best viewing times are dawn and dusk.

Once on the threatened list and down to an estimated 136 bears, grizzlies in the Greater Yellowstone Ecosystem rebounded to an estimated 728 bears. You’ll see them foraging for plant roots at a distance (bring a spotting scope or binoculars). I’ve seen dozens of them at Tom Miner Basin over the course of several fall visits. They are magnificent beasts.

You could easily spend a week in Yellowstone and not see all that it offers. But a three-day trip is a great starting point. If you’re interested in a specialized tour, such as wolf-watching or wildlife photography, do that the first day. Armed with what you learned from an expert, you’ll get the most out of the next two days — a day focused on wildlife starting at Tom Miner Basin and Lamar Valley (where I’ve seen everything from badgers to bears) and another day at different hydrothermal features and Yellowstone Lake. Cap off your day enjoying the Milky Way and a night sky free from light pollution.

Are you interested in seeing Yellowstone in winter instead? Here’s our list of reasons why Yellowstone is gorgeous during the colder months. 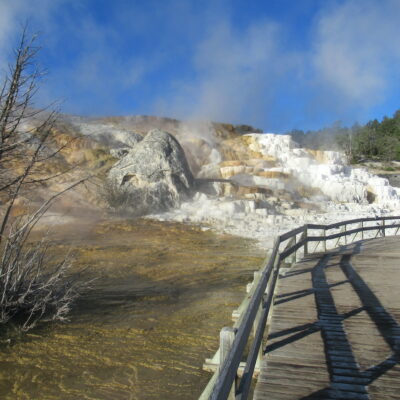 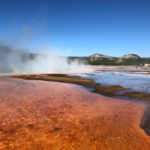 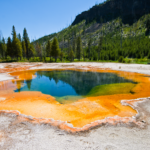