Can’t-Miss Places To Explore Along Route 66 In Tulsa, Oklahoma

Whether you use a nickname — like the Mother Road or Main Street of America — or refer to it by its given name, Route 66 is arguably the most famous highway in the United States. One of the nation’s first interstate roads, Route 66 arced southward through eight states and crossed three time zones connecting Chicago and Santa Monica.

In Oklahoma, Route 66 enters the Sooner State in its upper northeastern corner near Joplin, Missouri. Stretching more than 400 miles, the route divides the Cherokee Nation from the Osage Reservation as it races through the heavily wooded Ozark mountains toward tallgrass prairies and the Texas Panhandle, connecting Tulsa and Oklahoma City. But Oklahoma is more than roughly the midpoint of the journey along Route 66. It is also where Oklahoma businessman Cy Avery (also known as the Father of Route 66) conjured up the concept of the Main Street of America.

While many sites along Route 66 have long been abandoned, Tulsa has worked hard to restore historical gems as well as to build new sites that pay homage to the Mother Road. These are the can’t-miss places you’ll want to explore along Route 66 in Tulsa.

Pro Tip: Although it’s east of Tulsa in the town of Catoosa, the smiling blue whale floating in a pond on the west side of Route 66 is one of the most recognizable spots along Route 66 in Oklahoma. Consider snapping a selfie with, or picnicking by, the blue whale before hitting these other spots.

Route 66 through Tulsa is bookended by gateway arches. Beginning your tour of the Mother Road at the East Gateway Arch has the added benefit of informational signs and a map that provides an overview of the sights.

Pro Tip: Nearly 30 historical markers accompany Route 66 in Tulsa, so be sure to keep an eye out for them as you explore the Mother Road.

The current alignment of Route 66 in Tulsa is known as 11th Street, but the original Mother Road followed a different path. Look for signs at the intersection of 11th Street and Mingo Road to take a short detour known as the Mingo Greenway, which will take you down the original path of Route 66 and includes a small plaza with a few historical markers and informational plaques.

Rising from the center of the traffic circle where Cyrus Avery’s tourist court and service station once stood (now known as the Avery Traffic Circle) is a large public art piece. While you can’t miss the sculpture at the intersection of E. Admiral Place and S. Mingo Road, finding a spot to get out and take a photo can be a bit more complicated. I had good luck pulling into the lot at Clayton Homes and carefully making my way across two lanes of traffic to the lush center.

With a neon sign featuring a saguaro cactus blinking its location, you’ll find the Desert Hills Motel on East 11th Street. In true Route 66 motel fashion, you can park right in front of your room door and spend the night in a beautifully restored room that delivers a 1950s’ experience with modern conveniences.

Nothing pairs with a Route 66 road trip like an old-school diner serving up delicious comfort food surrounded by 1950s memorabilia, so be sure to stop for a bite at Tally’s Good Food Cafe. With more than 100 dishes on the menu, it can be hard to narrow down your choices, but Tally’s is known for having the best chicken-fried steak along Route 66. Each piece is hand-breaded and served with two sides and a freshly baked dinner roll. You’ll also discover a long list of burger options, and I highly recommend the deep-fried onion rings as your side dish. And whether you order it for breakfast or as a dessert, don’t leave Tally’s without trying a homemade cinnamon roll.

While the Golden Driller Statue is a short detour south of Route 66, it is another must-see roadside attraction in Tulsa. Standing 75 feet tall with a tawny arm resting on an oil derrick, this giant outside the Tulsa Expo Center is the sixth-tallest statue in the United States.

About two miles west of Tally’s, another delicious spot for a bite along Route 66 in Tulsa is the Mother Road Market. Just south of the Mother Road on Lewis Avenue, Tulsa’s first food hall brings more than 20 local eateries and breweries under one roof. Stop by to sample a wide range of dishes from rice bowls to ramen, pastries to pizza, and burgers to beer. And once you’ve satisfied your hunger, play a round of mini-golf on the Route 66-themed course on the back patio and admire the murals painted on the brick building.

Between Peoria and Quaker avenues, the neon Meadow Gold sign sits atop a brick loggia, lending its name to an up-and-coming mixed-use Tulsa neighborhood. The historic sign beckons visitors to informational signs, a Route 66-themed mural, and local shops and restaurants.

About a block from the Meadow Gold sign, larger-than-life fictional space cowboy Buck Atoms marks the spot of one local shop. Celebrate the magic of Mother Road by visiting Buck Atoms Cosmic Curios where you can find t-shirts, toys, stickers, and souvenirs. And for more cosmic fun, stay just around the corner from the shop at Buck’s Cosmic Crash Pad!

Located in the original alignment of Route 66, this Tulsa neighborhood is named after Tulsa’s first 24-hour gas station. Although the cerulean-topped landmark is not open to the public, it’s a great spot for photos and a navigational anchor as you explore the district’s restaurants, bars, and shops.

Located on the east bank of the Arkansas River, the Cyrus Avery Centennial Plaza pays homage to the Father of Route 66. Walk across the skybridge and read the informational signs before snapping pics of the large sculpture in the center of the plaza. The East Meets West sculpture stands at the symbolic midpoint of the Mother Road, illustrating a common occurrence when horse-drawn wagons from the oil fields and automobiles jockeyed for passing rights on the original narrow bridge that spanned the river.

As you drive across the Cyrus Avery Memorial Bridge, watch for three 20-foot-tall replica neon motel signs on the southwestern intersection of the road and river. Each sign — Tulsa Auto Court, the Will Rogers Motor Court, and the Oil Capital Motel —  represents an era along Route 66 in Tulsa.

Pro Tip: Be sure you hit all of the 66 stops along Route 66 in Oklahoma by collecting stamps in your official Oklahoma Route 66 Passport.

Designed to tell the story of Tulsa’s oil and transportation industries, the Route 66 Historical Village is an open-air museum along Southwest Boulevard. Start your visit in the information center inspired by an early Mother Road-era Phillips 66 gas station. Then head over to the 194-foot-tall oil derrick that marks the spot where oil was first discovered in T-Town on June 25, 1901. Stretched out in the shadow of the oil derrick is a Meteor Frisco 4500. This steam locomotive once traveled through Tulsa, transporting passengers and freight overnight between St. Louis and Oklahoma City.

Fun Fact: Oklahoma City is the only Sooner State town mentioned by name in Nat King Cole’s famous song, “(Get Your Kicks) on Route 66.”

As the East Gateway Arch designated the beginning of Route 66 in Tulsa’s city limits, the West Gateway Arch marks its end on the edge of a strip mall that includes Arnold’s Old Fashioned Hamburgers. Jump out for a final selfie before continuing your westward journey on I-44 or a less-traveled section of Route 66.

From decaying landmarks to lovingly restored gems, these spots along Route 66 in Tulsa teach you more about the road that helped down-on-their-luck Midwesterners flee the devastating Dust Bowl, paved the way for families to road trip to the beach, and continues to capture our attention in the 21st century.

Driving through Oklahoma can be a rewarding experience: 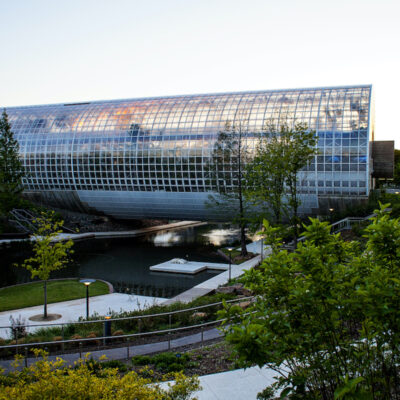 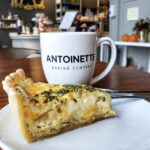 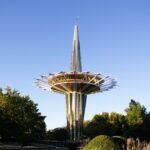 TulsaTulsa Is Offering Remote Workers Cash To Move There 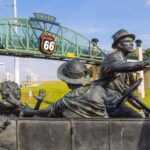 TulsaThe Best Things To Do In Tulsa, OK, Plus Where To Eat And Stay