It catches your eye right away. You see the colorful design in store windows, on ball caps, shirts, even keychains. Wichita’s city flag is an iconic symbol of Kansas’s largest city. The flag’s design features an Indigenous Hogan — an ancient symbol for the sun with a circle inside the sun and three rays extending in each direction — inside a blue background. Red and white paths extend from the sun.

While it ranks as one of the most beautiful municipal symbols around the country, its popularity surged locally over the last few years. Today, besides being on souvenirs and clothing, the Wichita city flag anchors public art projects.

Wichita’s public art scene has exploded over the past decade. Standing tall over the Arkansas River, the Keeper of the Plains sculpture celebrates Kansas’ Indigenous people. From the flag murals to other colorful murals, Wichita’s business district also includes a series of historical and artistic sculptures. You’ll find several military monuments and murals along the riverwalk. Wichita is bursting with beautiful art.

Cecil McAlister was a 47-year-old artist when he created the city’s flag design. The artist had a studio in the city before the Great Depression. Eventually relocating it to his family farm, McAlister also painted business signs to help support his family. He created the winning design during a contest to develop a new Wichita city flag. The fine art painter earned $40 for his work.

The Wichita flag is beautiful, rivaling a lot of state flags. Each symbol shares a belief. The blue circle represents contentment and happiness. The sun symbol — based on an Indigenous design — represents a permanent home, while the red and white rays mean a path to come and go as one prefers.

Almost 30 murals have been created based on the flag. Located around Douglas Avenue in downtown Wichita, you’ll find a mural of the flag itself. Other Wichita Flag murals incorporate the flag as part of the art, including as a boat’s sail and a ball cap. One mural combines the city’s two iconic symbols — the flag with the Keeper of the Plains.

From a boy and his toy car to cattle and ducks on a corner, sculptures highlight a walk along Douglas Avenue. With more than 30 exhibits, Dreamscape Bronze Sculpture Collection covering a few blocks depict life and history around Wichita.

The lifesize sculptures show people in real-life scenarios, including a mother pointing out a sign or building to her child. I like to think she’s showing him the historical street sign recognizing the city’s role on the Chisholm Trail. Another shows a man standing on a corner reading a newspaper.

However, two of my favorites involve actual events. I think it’s important to share the story behind a sculpture whenever you can.

The first is a statue of temperance advocate Carrie Nation, which features her standing with an axe in hand outside the Hotel Eaton. Minutes later, the diminutive woman would lead an attack on the bar, destroying a few items, including paintings and mirrors. The Hotel Eaton incident in 1900 marked the first time Nation would use her axe. She spent 30 days in jail awaiting trial. The 64-year-old Nation died in 1911, nine years before Prohibition started in the United States.

My ultra-favorite statue tells the story of the struggle for civil rights. A lunch counter, with a young woman on one end and a man with a child at the other, depicts a sit-in at Dockum Drug Store, not far from the ICT Pop-up Park, home to the sculpture. Open seats invite visitors to join the people at the counter. While there, your mind may wonder what life was like for African Americans in 1958, when Wichita experienced its sit-in.

The Wichita sit-in occurred in 1958, but received little media attention. African Americans sat at the counter daily for a month, each time ordering a drink. On each visit, they were denied. After a month of visits, the drug store’s owner surrendered and told his counter staff to take the activists’ orders. He was starting to lose money because whites weren’t eating there. Soon after, the Rexall drug store chain started to desegregate its lunch counters around the country. The Wichita police were instructed to avoid the lunch counter protests.

Seeking to add some color to an alley between historic buildings, Gallery Alley started as a temporary project in 2017. Today, organizers continue adding to the project in hopes of attracting even more visitors to the block housing classic businesses, such as Old Mill Tasty Shop. Almost 100 years old, the restaurant is an excellent place to order an old-fashioned milkshake.

Get the milkshake to go and enjoy it while checking out the impressive pieces at Gallery Alley. With a multicolored painting on the ground, you’re almost reluctant to walk over it as you explore other pieces on the vintage brick walls. However, tables invite visitors to enjoy a snack, lunch, or maybe that milkshake from Old Tasty Mill.

Artists have repurposed doors to create the alley doors. Using 10 doorways as their canvass, artists have designed paintings embracing area history and culture, or their own visions. From chickens on the alley door at Old Tasty Mill to a field of sunflowers on a bright, clear Kansas summer day, the alley doors have become a pop culture hit.

Gallery Alley is also home to summer concerts, art shows, and other festivities.

While some people may not associate military monuments and memorials with public art, the beauty and messages they share fit an artist’s vision. With about 20 monuments, Veterans Memorial Park respectfully honors the men and women who have served in the United States military, including those who didn’t return home.

Memorials recognizing each war or conflict the U.S. has been involved with are located in the park, near the Arkansas River. From a Purple Heart monument — honoring people wounded during battle — to monuments recognizing Gold Star mothers and families who have lost a family member during war, the Wichita military memorials go beyond the standard conflict recognition.

However, the park is also home to impressive monuments of gratitude and recognition. With an elaborate presentation, the Vietnamese American Community Memorial celebrates the relationship between the United States and South Vietnam during the Vietnam Conflict. The Memorial features Asian dragons in white marble, with an American and a South Vietnamese soldier in front of a wall with flags flying.

One of three ships to be named after Wichita (the latest was commissioned in 2015), the USS Wichita served eight years, before being decommissioned in 1947. The cruiser served during several battles, earning 13 battle stars to recognize meritorious service during these encounters. Following the surrender of Japan in 1945, the USS Wichita was used to transport American prisoners of war home. The stone monument, a short walk from the river, recreates the ship’s design.

The Bicentennial Flag Plaza showcases 15 flags that recognize key periods of American history. From a flag symbolizing the Revolutionary War through today’s flag with 50 stars, each flag has a small plaque explaining its significance.

While the Wichita city flag murals are a popular attraction, you’ll find even more murals located throughout the city. From downtown buildings to grain elevators, artists have created magnificent pieces of art that embrace their visions and interests.

The Douglas Design District Murals feature about 30 murals highlighting local history and pop culture. You’ll find social messages through an artist’s work, as well as a look at Wichita’s past. You’ll also discover a bit of pop culture, such as Frankenstein as part of a rock band or someone’s take on Picasso’s work. You may find a hummingbird on a wall, or even a pair of sunglasses. Art murals can always provide a look into an artist’s creativity.

The Beachner Grain Elevator mural features people of color looking toward the horizon, with hopefulness for a better future. The mural is one of a series focusing on the city’s underrepresented areas.

6. Keeper Of The Plains

Standing 44 feet above the confluence of the Big and Arkansas rivers, the Keeper of the Plains sculpture remains the best-known art symbol in Wichita. Honoring the Indigenous nations of the Midwest, the Keeper — as locals call it — represents a Native American holding a pipe skyward, giving thanks to the Great Spirit.

The Keeper of the Plains, a gift from Native American artist Blackbear Bosin to help celebrate the United States’s bicentennial in 1976, anchors the city’s riverwalk. Each night (9 p.m. spring/summer and 7 p.m. fall/winter), the Keeper is illuminated with pit fires at its base.

The attraction includes two walls showcasing the history of Indigenous people on the plains. Along with prairie grass, cactus, sage, and yucca, the exhibit includes symbols, such as bison, bow and arrow, tipi, pipe, and horses.

To help celebrate Wichita’s 150th birthday in 2020, about 13 artists created their versions of the iconic Keeper of the Plains statue. With 10-foot-tall sculptures located around the city, Keepers on Parade offers an opportunity to explore the city while searching for the colorful figures. From downtown to the B-29 Doc Hangar and Education Center, visitors learn about Wichita’s history while admiring the different versions of the Keeper. 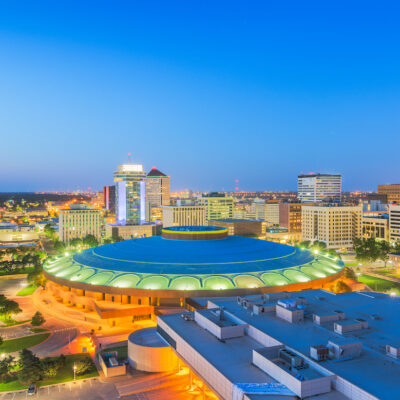 Wichita12 Unique Things To Do In Wichita, Kansas