The first time I drove through Concordia, Kansas, I noticed the “Home to the National Orphan Train Complex” sign on the outskirts of town. A quick Google search showed it wasn’t open at the crack of dawn on a Sunday morning. Crunched for time, that just meant I’d need to pass this way again. Several months later, I got the chance.

Concordia is located in Cloud County. Rustic barns, crops, and not surprisingly, sunflowers make for a scenic drive to this town of 5,000 people. It’s on Highway 81, 140 miles north of Wichita and 30 miles south of the Nebraska state line.

Concordia strives to make sure orphan train riders are never forgotten. It seems the whole town is invested in this ideal. They’re also invested in preserving history and welcoming visitors to these seven must-see attractions.

It’s only fitting that the National Orphan Train Museum is housed in a 1917 Union Pacific train depot. The museum tells the story of the 250,000+ orphaned or abandoned children sent west by train from New York between 1854 and 1929. Two charities, Children’s Aid Society and the New York Foundling Hospital, relocated children to all 48 states. Most were not adopted but were given room, board, clothing, and an education in exchange for working in their new homes and on the farms.

The museum’s artifacts, orphan train riders’ stories, and photographs provide a powerful and often heartbreaking picture of these children’s lives.

An estimated one in 10 people in the U.S. is descended from an orphan train rider. The National Orphan Train Complex includes a research center for riders, family members, and the public to delve more deeply into the subject.

If you’re descended from an orphan train rider and would like to know the train (they rode on regularly scheduled passenger trains) your ancestor took from New York, John Shontz and a team of volunteers with the Orphan Train Project will research the itinerary for you.

Pro Tip: Begin in the Welcome Center with a short documentary about orphan train riders, then continue to the museum. The buildings are wheelchair accessible. The gift shop has many books for sale, some signed by the authors. Allow two hours for your visit.

Statues of orphan train riders are scattered throughout Concordia. Along with each statue, a placard tells the orphan’s story. Several are located on the Orphan Train Complex. You’ll find the others listed on a flyer you’ll receive at the Orphan Train Museum.

Greeting visitors to Concordia, a statue of Children’s Aid Society agent Anna Laura Hill, holding the hand of an orphan train rider stands outside the Cloud County Tourism Office. Hill dedicated her life to these children, escorting them West and making repeated welfare checks on them after they were placed with families.

Pro Tip: Most statues are in Concordia’s level, walkable downtown.

Kansas has its share of oversized things, like the world’s largest ball of twine in Cawker City and a giant Van Gogh painting in Goodland. Concordia has a big wall — the longest sculpted brick mural in the U.S. It covers the entire side of the Cloud County Historical Society Museum Annex and Tourism Office. A collaborative effort among brick masons and artists, the whole wall mural showcases not only Concordia’s attractions but also life in Cloud County, past and present.

Sunflowers and the cottonwood tree represent Kansas’s state flower and tree. The train signifies the impact train service had on Concordia. Not only did it bring the orphans here, but also passengers, freight, mail, and supplies. It also shows the last biplane built in 1928 by Page Aircraft Company in Lincoln, Nebraska, which is now part of the Cloud County Historical Society Museum Collection.

Inside the building, you’ll be able to see one of the bricks an original drawing artist and sculptor, Catharine Magel, made in designing the wall. The 140 foot-long wall contains 6,400 bricks, each weighing 26 pounds before firing.

Cloud County’s rich history is on view at the historical society’s museum, located in the 1908 Carnegie Library building and annexes. Along with the Lincoln-Page biplane that’s pictured in the mural, collections include artifacts from home and farm life in Cloud County.

Look for a letter written by Martha Washington in 1793 that was donated to the museum in 1959.

Pro Tips: Plan for at least two to three hours in the museum. It is wheelchair accessible.

While the Cloud County Historical Museum has exhibits from the prisoners of war, the actual camp is open for guided tours from May to October. The first German POWs arrived in Concordia on a special train in 1943 after being captured in North Africa. While at Camp Concordia, prisoners worked on local farms and at an ice plant. Many took college courses accredited through the University of Kansas.

The camp has memorabilia donated by families of the POWs, including a pair of knee-high black leather boots that have more miles on them than most. The stories shared speak to their favorable experience — so much so that after release, some prisoners returned to the area as free men.

Pro Tip: To schedule a guided tour, call (785) 243-4303. A tour of the wheelchair-accessible camp is free, but donations are gratefully accepted.

Workers discovered 27 original playbills during restoration in the 1970s. The playbills date back to 1908, and you can see them as you tour the theater. You’ll also see the Napoleon-themed curtain that replaced the original.

If you’re brave, you can join a ghost tour of the building. It’s said to be haunted by Earl Brown, the benefactor’s son.

Pro Tips: Allow an hour for a guided tour of the ADA-compliant theater. Donations are accepted.

The Sisters of Saint Joseph warmly welcome visitors to their home. The massive brick convent is on the National Register of Historic Places. Guided tours allow visitors to not only see the building’s architecture but also the art and stained glass within. The chapel’s rose window is stunning.

Spend some time in the gardens while you’re there. The organic vegetable garden itself is a work of art. Flower gardens and a grotto with a statue of Saint Bernadette invite visitors to linger.

Pro Tip: The convent is ADA accessible. To arrange a guided tour, visit their website. Allow one to two hours for your visit.

Concordia’s walkable downtown has some great dining options if you’ve worked up an appetite. Visit Jitters for coffee and pastries, Britt’s Fountain and Gifts for an old-fashioned soda, Gambino’s for a slice of pizza, El Puerto for Mexican fare, Easy G Sports Grill for a burger, or Maverick’s Steakhouse for upscale dining. 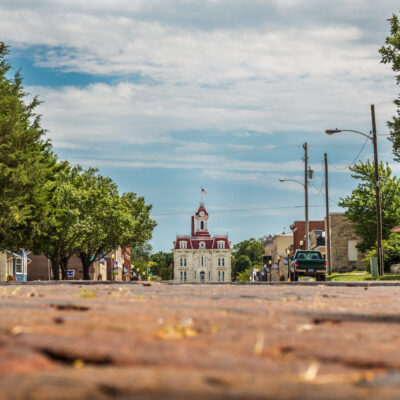