Some of these communities have hosted me, but all opinions are my own.

When General Dwight Eisenhower came home from World War II, his hometown held a parade for him. Eisenhower had earned numerous honors, but he told the crowd, “The proudest thing I can claim is that I am from Abilene.” Eisenhower, nicknamed “Ike,” later became the 34th President of the United States, and his legacy is all over his hometown. The Eisenhower Presidential Library, Museum & Boyhood Home underwent a $12.25 million renovation in 2018–19.

While Ike is Abilene’s main claim to fame, the city offers more. Tour the opulent 25-room 1905 Seelye Mansion. The Seelyes made their fortune in patent medicines, and the Patent Medicine Museum is in their backyard.

Pet the retired greyhounds at the Greyhound Hall of Fame, then check out the Dickinson County Heritage Center, which includes the C.W. Parker Carousel and the Museum of Independent Telephony.

From May to October, ride the Abilene & Smoky Valley Railroad after strolling through Old Abilene Town.

Look for Ike’s signed paddle at The Farmhouse Restaurant, and stay at Abilene’s Victorian Inn or camp at Walt’s Four Seasons Campground.

I’m one-quarter Swede and my husband graduated from Bethany College in Lindsborg. I fell in love with the city the first time I visited. But you need no Swedish ancestry to enjoy Little Sweden U.S.A.

Begin your day at Blacksmith Coffee Shop & Roastery. Start shopping at the Hemslöjd Swedish Gifts, where they make Lindsborg’s signature Dala holiday horses. Rent a quadricycle there and pedal around downtown Lindsborg. We recommend The Good Merchant, Trollslända toy store, Small World Gallery’s jewelry and art, and Rendezvous Adventure Outfitters. Take a break at The White Peacock café, then search for the Wild Dala Herd horses. The Blue Colla Dala is my favorite.

No visit to Lindsborg is complete without stopping in at the Öl Stuga restaurant. Enjoy a Brent Nelson sandwich.

Stretch your legs on the Välkommen Trail. Near sunrise or sunset, drive to the top of Coronado Heights for fabulous views. Experience the 1904 World’s Fair Swedish Pavilion and the Old Mill Museum. Stay at the Dröm Sött, Sweet Dreams Inn.

Pro Tip: At night, walk across the lighted First Street Bridge near the Välkommen Trail’s north end for a soothing experience.

3 And 4. Cottonwood Falls And Strong City

Home Base To The Flint Hills

If you’ve heard Kansas is flat, the Flint Hills will show you otherwise. Experience the Flint Hills and the tallgrass prairie’s last major segment at the Tallgrass Prairie National Preserve north of Strong City. While hiking through the preserve, stop, close your eyes, and listen to the grass and the birds singing. Watch for the 100 bison who live in the preserve. The Southwind Nature Trail to the Lower Fox Creek School is my favorite hike.

On Friday nights, head to downtown Cottonwood Falls for Emma Chase Friday Night Music. Join in the concert or sit back and enjoy. During inclement weather, Prairie PastTimes hosts the weekly event. In warm weather, bring your lawn chair and sit outside the Symphony in the Flint Hills Gift Shop & Gallery. Check for location updates.

Stay upstairs at the Grand Central Hotel in Cottonwood Falls, and savor a steak at the Grand Grill on the first floor.

Pro Tip: Cottonwood Falls and Strong City are less than two miles apart. Walk between them on the Community Connection Trail and stop to admire the Cottonwood Falls. In late spring, visit the waterfalls at the Chase State Fishing Lake.

I cried when I visited Fort Scott’s Lowell Milken Center for Unsung Heroes. The center’s story started with Irena Sendler, a heroic Catholic social worker who rescued more than 2,500 Jewish children from Warsaw, Poland, during World War II. She buried lists of the children’s real names in jars across the street from the German soldiers’ barracks. At the war’s end, nearly all the children had lost their parents in the Treblinka death camp. Her story inspired the center to tell her and many more heroes’ stories.

Black photographer, filmmaker, writer, and musician Gordon Parks grew up in Fort Scott. He was the first Black person to direct a major motion picture, The Learning Tree, an autobiography filmed in Fort Scott. Parks willed his memorabilia to the Gordon Parks Museum. His family and friends have continued donating to the museum.

Fort Scott began with the army’s Fort Scott. The fort was active from 1842 to 1873, from the Permanent Indian Frontier through the Mexican War, Bleeding Kansas, the Civil War, and railroad construction.

Stay in the Courtland Hotel & Spa, a former railroad hotel. Drink a bourbon in Bourbon County at Crooner’s, and try the beef-flavored marshmallow at Luther’s BBQ Restaurant. Luther’s has some of the best barbecue anywhere.

A natural disaster couldn’t bring Greensburg down for good.

Instead of giving up, Greensburg went green, constructing Leadership in Energy and Environmental Design–certified buildings as part of its master plan. The 5.4.7 Arts Center, named for the tornado’s date, was the first LEED Platinum building in Kansas.

In 1888, Greensburg citizens dug a world-record 109-foot deep, 32-foot wide well — by hand! During the tornado, the museum above the Big Well pancaked above the well. The museum reopened in 2012, including eerie reminders of the day that Greensburg nearly died.

The terrible twister was not Kiowa County’s first visitor from the sky. The museum contains the Space Wanderer, a 1,000-pound pallasite meteorite, one of the largest ever found.

Great Bend’s attractions center around flight, both birds and airplanes, plus drag racers who race on a former runway.

America’s largest inland marsh, Cheyenne Bottoms, is a giant bird magnet. Vast flocks of birds visit the Bottoms during migration seasons, but the spring migration brings the most. Of those, 352 come to Cheyenne Bottoms. Begin your visit at the Kansas Wetlands Education Center, and sign up for one of their guided tours.

The Great Bend Brit Spaugh Zoo’s Raptor Center mends the injuries birds of prey sustain. When they’re healthy, the center releases them into the wild. Watch the process as the birds heal.

During World War II, a different breed of bird flew at the Great Bend Army Airfield. Great Bend trained B-29 Superfortress crews. The city honors the fliers at the Great Bend B-29 Memorial Plaza. At the Scra Dragstrip, drag racers have replaced the planes on one of the airfield’s long runways.

Heart of Kansas Mercantile/Miss Pretty Pickles is as adorable and fun as its name. Choose from nearly 200 board games at Mind Sculpt Games.

Pro Tip: Ride or walk the seven-mile hike and bike path (PDF) on Great Bend’s Arkansas River levee system. Remember that in Kansas, the river is called the Ar-KAN-sus, not that other state’s name.

Every one of these cities could win a friendliest and best small town award. You’ll enjoy them all.

For more inspiration for your trip through Kansas, consider: 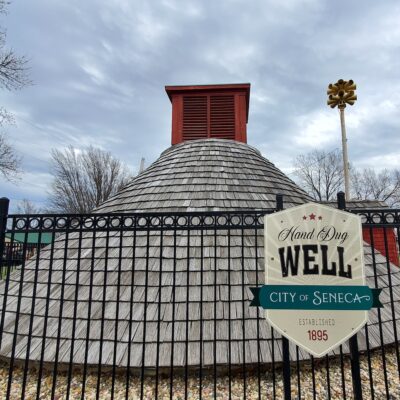