Why I’m No Longer Allowed To Visit Israel

When I visited Israel and Palestine in 2007, I never dreamt it would be my last (and only) time.

I traveled with a delegation of non-violent peace activists in order to learn more about the Israeli-Palestinian “conflict.” I didn’t know very much, and I wanted to broaden my perspective.

I was prepared to be overwhelmed, but I wasn’t prepared to be so deeply moved by the courageous and creative members of the organizations with whom we met.

For example, the residents of Wahat al-Salam-Neve Shalom, a bicultural village of 25 Jewish and 25 Palestinian families (that has since grown to 70 families), make an intentional effort to learn and value each other’s customs, languages, and histories.

Before I visited, I expected an idyllic “kumbaya” community, where everyone joyously embraces their neighbors and frolics to a ’60s tune of peace and harmony. It’s not. Making peace is messy. Instead, I met the most opinionated people imaginable who daily rise to the challenge of negotiating conflict respectfully. Since its inception in 1970, the Israeli village has been the target of hate crimes; a few months ago, arsonists struck twice, burning most of the primary school, then the village library. (Who burns schools and libraries?)

Wahat al-Salam-Neve Shalom (which means “Oasis of Peace” in Arabic and Hebrew) has a guest house for visitors.

We also met with Yehuda Shaul of Breaking the Silence, a group of former Israeli soldiers who speak out about the injustices they were required to commit against Palestinians in the West Bank — injustices such as invading and demolishing Palestinian homes.

“What’s going on in the Occupied Territories is the biggest taboo in Israel,” Shaul told our group. “You can’t be there and stay with clean hands.” For speaking out about his military service, Shaul was once charged by the Israeli government with treason and espionage — which might have led to the death penalty had he been found guilty.

But the organization that affected me the most was the Parents Circle-Family Forum, a groundbreaking, heartbreaking group of parents whose Palestinian and Jewish children are casualties of the conflict.

In Jerusalem’s old city, our group was addressed by Ibrahim Khalil and Rami Elhanan. Khalil’s Palestinian son was killed by an Israeli settler and Elhanan’s Jewish daughter was killed by a Palestinian suicide bomber. These fathers told us about the challenges of channeling their grief into activism: They realized their religious, political, and historical differences pale in comparison to their common losses.

Meeting these peace and reconciliation leaders affected me profoundly. I’ve since written about these organizations — a few of those articles won journalism awards — and I raised funds for Wahat al-Salam-Neve Shalom after my trip. I was — and continue to be — awed by these Palestinians and Jews who are heroically overcoming decades of cultural pressure to forge a peaceful future.

Everyone should meet such inspiring leaders. But, the Israeli government has a new policy of barring entry to anyone who supports the Boycott, Divestment and Sanction (B.D.S.) movement. Since 2005, the B.D.S. movement has sought worldwide support to economically pressure the Israeli government to comply with international laws and stop oppressing Palestinians — similar to the way worldwide boycotts, divestment, and sanctions helped end South Africa’s formal apartheid policy.

Boycotts are non-violent protests that date back centuries. Aristophanes employed one in 411 B.C. in his play Lysistrata, which was about Greek women who withheld sex to protest the Peloponnesian War. British abolitionists boycotted slave-produced sugar in the late 1700s.

The term boycott was coined in Ireland in 1880 when poor farmers were evicted from their homes by a land agent named Charles Boycott. Calls to shun him were so successful that his farm, stable, and house staff refused his work, local businessmen refused his business, and even the postman refused to deliver his mail!

Whether it’s grapes in the 1970s, Montgomery buses in the 1960s, or English tea in 1773, Americans exercise the right to boycott.

In fact, the U.S. Supreme Court has “unequivocally ruled that boycotts in pursuit of humanitarian and social justice goals are a form of political speech entitled to the highest protection under the First Amendment,” according to the Center for Constitutional Rights.

When California was considering legislation to prevent any supporters of the B.D.S. movement from getting state contracts — boycotting the boycotters — I wrote a column opposing the legislation.

“A major controversy,” I wrote, “is the Israeli government’s persistent support and funding of settlements, the illegal outposts built high in the hills of the West Bank by ultra-conservative Jews. Roads that forbid Palestinian travel, systems that siphon water from Palestinian farms and villages, and electrical grids that plunge Palestinians into darkness are built for settlements. Sewage, however, runs downhill untreated, contaminating Palestinian wells and farms.”

I noted that every U.S. president since Lyndon Johnson (with the exception of Donald Trump) opposed the expansion of these settlements, and many of the Jews I met believe the settlers undermine security and stymie peace efforts.

I quoted a report by the UN High Commissioner for Human Rights that concluded, “Violence by Israeli settlers against Palestinians and their property is directly linked to the existence and expansion of illegal Israeli settlements in the West Bank.”

During my trip in 2007, I witnessed first-hand some of that violence.

I saw settlers armed with rifles illegally occupy a Palestinian’s home in a dense neighborhood in Hebron, in the southern part of the West Bank. The squatters hurled rocks and rotten food at Palestinian children.

“In At-Tuwani, a rural village south of Hebron,” I wrote in my column, “I watched Israeli soldiers accompany Palestinian schoolchildren past settlements to shield them from attacks. Months before, observers’ videos of settlers stoning the schoolchildren had created an international outcry that embarrassed the Israeli government into requiring this armed escort.”

I was really disturbed by these encounters and felt I should share my experiences. The U.S. sends $3 billion in military aid to Israel yearly. I feel that if Americans are supporting Israel financially, they should know what their tax dollars are funding. So I spoke up.

What I didn’t expect is that by practicing democracy in my own country, I’d be barred from entering the Middle East’s primary democracy. “In 2017,” reports The Times of Israel, “Israel passed a law banning entry to foreigners who support boycotting the country.” Since I’ve written about B.D.S., I guess that includes me.

I’m in good company: In October 2019, two U.S. Congresswomen, Rashida Tlaib (Minnesota) and Ilhan Omar (Michigan), were denied entry into the West Bank and East Jerusalem, as they have voiced support for a boycott.

It begs the question: If I support a boycott of Israel, why would I want to return? I had considered applying for a job with an American organization that supports B.D.S. The job was to accompany Americans on the type of fact-finding trip that had affected me so deeply. Now, some peace organizations are curtailing their trips, as they have no assurance that Israel will allow their participants to enter.

That’s a shame. Because all Americans should be allowed to meet the brave Jews and Palestinians who do the hard work of reaching out to the “enemy” or of speaking up about the realities in the Occupied Territories. All Americans should have the opportunity to learn what I learned — that peace in Israel and Palestine isn’t just a possibility, but a current reality.

If you want to visit Israel, travel with one of the many established peace organizations, and be sure to ask the organization about its contingency plan if its participants are denied entry. 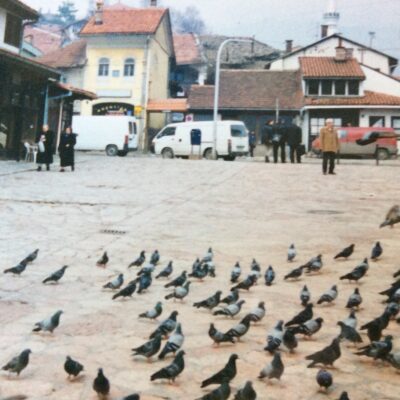