Incredible Cottages You Can Rent From The Royals

The Crown has piqued our interest in the royal family’s lavish lifestyle. But what many fans don’t know is that the royal family’s portfolio of properties includes vacation rentals. You heard that right — the curious can stay on their royal estates, walk the same paths, and soak up the same views. The catch is that the royals don’t rent these out when they are in residence, so unfortunately there will be no sightings of the Queen in rain boots or Prince Philip stalking deer.

Here are six incredible properties where you can rent cottages from the royals.

Balmoral is a Scottish baronial-style castle with fairy-tale turrets set against a dramatic Highlands backdrop. Prince Albert bought the property for Queen Victoria, and the castle was constructed in 1856. Albert died at 42, and Victoria spent long stretches at Balmoral in mourning. She wrote of Balmoral: “All seemed to breathe freedom and peace, and to make one forget the world and its sad turmoils.”

Today’s royals head to Balmoral in July and August, when the summer holidays free them from royal duties. The Queen swaps her crown for a headscarf and climbs behind the wheel of a Land Rover. Members of the extended family visit, and the prime minister is invited for a weekend.

The property’s various self-catering cottages accommodate five to eight guests each. The Colt Cottages are closest to the castle. The Karim Cottage was built in 1890 for Munshi Abdul Karim, Victoria’s Indian servant. Connachat Cottage is 3 miles away on the edge of the Ballochbuie Forest. Garbh Allt Shiel, where Queen Victoria sometimes spent the night, is 5 miles away. Rhebreck Lodge offers views over Balmoral’s private golf course. Alltnaguibhsaich Lodge overlooks Loch Muick and sleeps 12. For more information on cottage rentals, see this website.

The Crown’s “The Balmoral Test” provides a look at the way the royals spend their summers here. During the time that Balmoral is open to the public, from April until July, guests can enjoy that same lifestyle, with rounds of golf, lunches outside, fly-fishing on the River Dee, and bracing walks. Don’t pull a Margaret Thatcher — pack suitable footwear. You can join a garden tour, take a ranger-guided hike, or charge around in a Land Rover like the Queen. After 5 p.m., the place is yours — perhaps enjoy a few drinking games such as Ibble Dibble. The Royal Lochnagar Distillery is close by, so it’s easy to source a dram.

The Queen spends the time between Christmas and mid-February at Sandringham Estate. It is one of her privately owned homes. She inherited Sandringham and its 20,000 acres of land from her father in 1952. It’s been in her family since 1862, when Victoria and Albert purchased the property for the 21-year-old Prince Edward, later King Edward VII.

Prince Philip retired from royal duties in 2017 and moved to the estate’s Wood Farm. In 2015, the Queen gave Anmer Hall, a Georgian manor on the estate, to William and Catherine, Duke and Duchess of Cambridge. William’s mother, Princess Diana, was born at Park House, an estate her family rented from the Queen. Growing up, Diana played with Prince Andrew and Prince Edward. Prince Charles, being 12 years older, was rarely around, although according to Tina Brown’s The Diana Chronicles, Charles, when 17, interrupted the five-year-old Diana’s tea party with Andrew. Diana moved from Sandringham at 14 after her father inherited Althorp in 1976.

The Sandringham Estate is a working farm. The three-bedroom Garden House, formerly the home of Sandringham’s head gardener, is available to rent. The Granary, a luxury barn conversion, is an 11-minute drive away on the edge of the property in the quiet village of Great Bircham. Its three bedrooms have ensuite bathrooms. French doors open to the gardens, and there’s a wood-burning stove. A good pub is just a short stroll away, and there are country walks aplenty from the doorstep.

During your visit, you can tour Sandringham House, taking in the trompe l’oeil ceilings and gilded furniture, and enjoy the 60 acres of formal gardens and 600 acres of parklands, including the 16th-century Saint Mary Magdalene Church. Sandringham is bordered by The Wash, a vast estuary and haven for bird life. Enjoy the nearby beaches and picturesque villages with their gastropubs and Michelin-starred restaurants, or visit the other stately homes in the area.

3. The Castle Of Mey, Scotland

The Castle of Mey was the only castle owned by the Queen Mother. The original castle was built between 1566 and 1572 by George Sinclair, 4th Earl of Caithness. In 1952, after the death of her husband, King George VI, the Queen Mother visited friends in the Highlands. She fell in love with the ruined castle’s charm. On learning that it was abandoned, she declared, “Never! It’s part of Scotland’s heritage. I’ll save it.” She restored both the castle and its 30 acres of grounds, making regular visits in August and October from 1955 until her death in 2002. Prince Charles developed a similar bond with the castle during his childhood and still spends a week there each year. Before the Queen Mother died, she made the castle over to the Queen Elizabeth Castle of Mey Trust.

Today, guests can stay in the Captain’s House, where the Queen Mother picnicked indoors because of the sea views. This luxury self-catering cottage includes a 20-foot conservatory overlooking an enclosed garden. In May of 2019, Prince Charles opened The Granary Lodge, a 10-bedroom bed and breakfast perfect for couples. There are downstairs rooms and two luxury suites upstairs. A drawing room features an open fire and views of the Pentland Firth. All rooms are dog friendly. For more Castle of Mey rentals, see this page.

During your visit, you can tour the Castle of Mey. The Queen Mother’s beloved pre-lunch tipple was gin mixed with Dubonnet and a slice of lemon — with the seeds removed! Visit nearby Dunnet Bay Distillers for a gin tasting; their botanicals are gathered from around the castle walls. Dunnet Head is Scotland’s northernmost point, offering sightings of the northern lights. Enjoy the mysterious Achavanich Standing Stones. The area also offers bird-watching — keep an eye out for puffins on the boat trip out to Orkney.

Llwynywermod, a former 18th-century coach house and farm, has been the Welsh home of Prince Charles and Camilla, Duchess of Cornwall, since 2007. In a secluded location outside the town of Llandovery, Llwynywermod is cocooned within 192 acres of farmland and woodland and offers stunning views of the countryside.

Two cottages adjoining the main farmhouse are available. North Range sleeps six, and West Range sleeps four. Both have stone floors, open fireplaces, and windows with oak shutters. On-site materials such as Welsh slate were used in the construction, and it is said that Camilla’s sister, Annabel Elliot, did the interior design. The blankets, quilts, and curtains are made from Welsh textiles, and the rugs are from a local wool mill.

The cottages exemplify Charles’s commitment to green living. Sustainable natural building products include wool insulation and hemp plaster. Heating and hot water are from a wood chip boiler. A reed-bed sewage system filters wastewater, the gardens are pesticide-free, and even the washing-up liquid is eco-friendly.

With their open fires, these cottages are perfect for hibernation with a book and some music. Or stride through the sheep-dotted hills and dales in your rain boots like a royal. Carmarthenshire is famous for its many castles, and you can hike in the Brecon Beacons.

In 1960, Princess Margaret married photographer Antony Armstrong-Jones, later Lord Snowdon. They spent their early marriage at the Plas Dinas Country House, a home in North Wales that had been in his family for 200 years. They continued spending weekends there until their divorce in 1978.

The historic country house is set on 15 stunning acres and is now a hotel offering 10 individually designed suites. You can also stay in the butler’s quarters, tucked in the attic. The 400-year-old house contains memorabilia on loan from the family, including portraits and Snowdon albums. Guests love this brush with royalty! The drawing room has a roaring fire in the winter, and in the summer, there are cocktails on the terrace. Spring brings a carpet of bluebells to the grounds. The award-winning Gun Room Restaurant offers afternoon teas and candlelit dinners. You can also stay in one of the property’s self-catering cottages.

If you’re into railroads, you can ride the heritage Welsh Highland Railway around the property or drive to Mount Snowdon for one of the world’s most thrilling rail trips. Visit Caernarfon Castle, where Prince Charles’s investiture as the Prince of Wales occurred in 1969. Lord Snowdon played a key role in planning the event. Other ancestral properties in the area include the Plas Newydd House and Penrhyn Castle. The nearby Dinas Dinlle Beach and Menai Strait are areas of outstanding beauty.

The royals don’t own Cliveden House, but one day it’s likely to end up on an episode of The Crown — as surely as the relationship between Meghan, Duchess of Sussex, and the royals is a story waiting to be told. Meghan stayed here with her mother, Doria Ragland, on the night before her wedding to Prince Harry. It’s a 25-minute drive from Saint George’s Chapel at Windsor Castle.

The grand mansion was built in 1666 by the 2nd Duke of Buckingham. Queen Victoria, King Edward VII, and Queen Elizabeth II have all visited. It was the site of the scandalous Profumo affair. It was also the home of Nancy Astor, an American who moved to England, married a British aristocrat, and became the first female Member of Parliament. She banished what she described as the “splendid gloom” of Cliveden’s decor, replacing it with bright chintzes and freshly cut flowers — quite reminiscent of Meghan’s breaks with royal tradition.

Today, Cliveden offers 47 lavish rooms. The hotel won’t reveal which room Meghan stayed in — perhaps the Lady Astor Suite, one of the most luxurious bedrooms in England, with its massive canopy bed, velvet-upholstered furniture, and marble bathtub. Guests can enjoy luxurious treatments in the spa, delight in fine dining, and wander the 376 acres of grounds, featuring a Japanese water garden, a 6-acre Parterre, and 900 rosebushes. Or why not embark on a boat ride down the Thames, just like the kings and queens of yore?

If you can’t afford to stay at one of the world’s finest luxury hotels, don’t worry — tours are available through the National Trust. 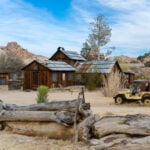 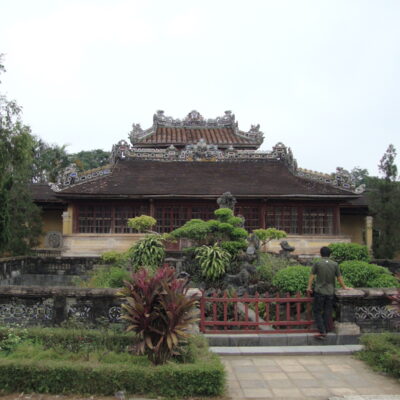 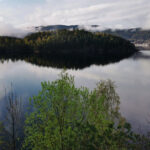