The Iconic Australian Rail Journeys You Must Experience

I’ve traveled across Europe, the UK, and the U.S. by train, but nothing compares to Australian Outback rail journeys. They are amongst the world’s longest routes and showcase amazing ochre scenery and brazen sunsets. Of the following three journeys, the first two are luxurious. The third is put in as the outback ring-in — Australian slang for substitute — to balance the offerings.

The Ghan, Darwin To Adelaide

One of the world’s greatest rail journeys — a bucket list item. The Ghan runs 1,852 miles from the top of Australia to the bottom through the Red Centre on a 3-day, 2-night journey.

There’s a touch of pioneer spirit traveling through Australia’s red heartland, in the tracks of the Afghan cameleers who once led their camel trains through this desert. The train is named after them.

The Ghan is roughly a half-mile long. You don’t board along a platform; instead, catch a taxi to your carriage. From the outset, a sense of camaraderie and adventure.

The original line was opened in 1929, and legend has it the Old Ghan was once stranded for two weeks, and the engine driver shot wild goats to feed passengers.

The Ghan whizzes past cattle stations the size of small European countries. Looking out, I saw the carriages twisting through the desert like a snake.

We met travelers from all over the world over games of Scrabble. Just like the cricket, the English wanted a rematch.

The Ghan offers whistle-stop tours. We chose a cruise down Katherine Gorge in the traditional land of the Jawoyn people. Gulp! Crocodiles lined the banks.

Alice Springs offers a short immersion in Indigenous art, a visit to the Royal Flying Doctor Service, and the old Telegraph Station that once helped connect Australia with the world. Some passengers upgrade to a scenic flight over Uluru (Ayers Rock). Southbound trains stop in Coober Pedy, an opal mining outpost, so hot residents have homes, churches, and even hotels underground.

Shared cabins have private bathrooms. Platinum class has a double bed. Gold class has two single pull-down beds — discreetly made up for you while you’re at dinner. Fares are inclusive of excursions. Red class is comfortable, but has reclining seats and a snack bar rather than meals. No excursions.

The Indian Pacific, Sydney To Perth

The Indian Pacific is one of the world’s longest train journeys. The 2,704-mile, 4-day/3-night experience crosses Australia from Sydney on the East Coast to Perth on the west. Great Southern Rail operates both the Indian Pacific and The Ghan, so there’s the same fare structure and silver service meals.

The Indian Pacific takes in the towering majesty of the Blue Mountains and the grand sweep of the Nullarbor Plain, which means “no trees” in Latin. Experience the straightest train track in the world, no corners for 298 miles! The desert is endlessly flat but mesmerizingly beautiful. At dusk, it’s a soft lilac moss color. Easy to spot a wild camel or a bounding kangaroo. Other times you go for hours without seeing anything. Then suddenly, there’s a willy-willy swirling dust or a wedge-tailed eagle scooping up a rabbit kitten. Australia’s largest bird of prey is also the train’s mascot — the 6-foot wingspan symbolizing this epic journey spanning the continent.

The trip filled me with nostalgia. My mother drove across the Nullarbor in 1957 with me — a toddler by her side. Having recently arrived from England, she had to reach the East Coast to meet up with my father. Now a modern highway, her drive was a 6-day haul on a rough track where we slept in the car. Looking out at the adjacent highway, I was reminded of her grit and determination.

I’d brought my teenage son along — not banking on the lack of travelers in his age group. As he pointed out, his presence brought the average age of the passengers down by 60 years.

Luxurious train journeys suit mature travelers as it saves an arduous drive as well as ticking off bucket list trips. When he asked me why everyone was so old, I said it was because they had the money and time to travel.

Our compact cabin was ingenious. The handheld shower was over the toilet, but it worked well, with excellent water pressure.

There was a spacious lounge car with a bar and comfortable seating. An almost total digital detox. No Wi-Fi and sporadic phone coverage. New pastimes became card games and turning strangers into friends. One person set out a jigsaw, and passerby would fill in a likely piece. Clever conversation starter!

Like The Ghan, this journey is based on personalized service. Stewards politely knock on the door, show you how everything works, and discuss dietary requirements. Their friendliness, train knowledge, and passion for the early explorers and bush characters helps make this journey.

Guests are shuffled at dinner, so it was good for my son to meet so many interesting ‘older’ people. He soon changed his tune about how interesting they were. We worked off the fine food by walking the length of the train — a journey of half a mile. The corridors were so narrow that when squeezing past someone, I’m sure it counted as carnal knowledge.

A stop at Broken Hill with an excursion to the Living Desert Reserve (think sculptures in Mad Max territory). In Adelaide, there’s a city walking tour or a trip to the Barossa Valley. Along the Nullarbor, there’s a whistle-stop rest at the tiny town of Cook, in the middle of nowhere, and a trackside dinner at Rawlinna, a remote sheep station.

At Kalgoorlie, a bus tour takes passengers to view the open-pit gold mine where the mine’s scale makes gigantic dump trucks look like Tonka toys. This is a wild-west town. The bus cruises past the brothels in Hay Street, and the guide fills us in on folklore — tales of greed, murder, and revenge.

Spirit Of The Outback, Brisbane To Longreach

After those first two train experiences, I was hooked. So I decided on a third. The Spirit of the Outback leaves Brisbane to travel 1,045 miles to Longreach, an outback town in the far north of Queensland few Australians get to visit.

While the previous journeys were with a private company, this 25-hour trip was with the government-run Queensland Rail. To be fair, it cost a few hundred dollars while the others cost thousands.

My cabin was minuscule. A day lounge chair folded down into a narrow bed. A shared toilet at the end of the corridor. When I shut my door and lay in bed, my feet touched the far wall. It felt like a mobile coffin. Others might call it cozy, but I suffer from claustrophobia. To sleep, I kept my blind open for outside views. Somewhere during the night, we pulled into a station. Looking out, I realized my bed was slowly being paraded past a whole platform of onlookers. I quickly rolled over, pulling down my nightdress — goodness knows what body bits they saw.

Like the other two train journeys, the food was excellent. This time hearty fare such as lamb shanks, Bushman’s Beef Salad, and sticky toffee pudding with Bundaberg rum ice cream. Dining booths were named after cattle stations — Wellshot, Bowen Downs, and North Delta.

Exploring, I discovered the economy section. There was only one passenger! She had a whole carriage to move around in and a bathroom to herself. While no lavish meals, this would have been a more comfortable way to travel.

A brief stop at the outback town of Barcaldine, the site of an 1891 Shearers’ Strike that kickstarted the trade union movement. But this is an A-to-B journey without side excursions.

As we neared Longreach, my heart lurched. City bred, I’d never seen the effects of a drought. The piteous lambs ran from the train, their docked tails wobbling as they kicked up great plumes of dust from the parched earth.

In retrospect, I found this journey a novel way to reach an isolated destination. Longreach gave me a stronger sense of outback life than I’d experienced on the luxury trains. They were tasters, but this train deposited me in the Outback — dust and all. Longreach is a study in the tyranny of distance with a swag of tourist experiences. Qantas started here in 1922. A rickety bi-plane was used to deliver mail to outback stations growing into the national carrier. The Qantas Founders Museum offers hangars full of social history and planes. The Stockman’s Hall of Fame is another huge museum devoted to outback history. Tourists can tour the School of the Air (a radio school for one of the world’s largest classrooms — kids on cattle stations), plus ride an original Cobb and Co Stagecoach with dust and dogs trailing behind. There are also good restaurants, especially if you like steak.

Pro Tip: For luxury, take The Ghan or the Indian Pacific. For brochures, click here. If you want a more full-blown outback experience, the Spirit of the Outback is the way to go. 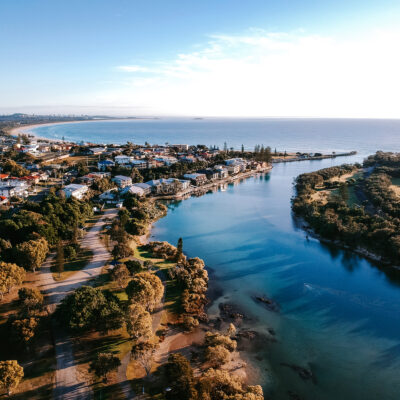