A trip to Alaska can be expensive, especially if you take a cruise from the mainland, which does not allow you much freedom to roam the Last Frontier once you get there. Driving our RV as we did the previous year during our epic Alaska RV road trip: Valdez to Hayder allowed us to truly explore the state, and while we didn’t think we’d be back so soon, we were ready for another Alaska RV road trip.

This time, we stored our Class A motorhome at a resort in Monroe, Washington, and flew in. We rented a much smaller 22-foot Class C motorhome, which would be self-sufficient in remote areas and easy to maneuver in the cities and get better miles to the gallon than our rig. Since it was almost off-season, the rates were very reasonable for the combined lodging and vehicle the Class C provided.

Here, I share our route (note that we started in Anchorage) plus recommendations for day trips from some of the larger cities.

We took the RV to the Kenai Peninsula to the mouth of the famous Kenai River, partly on the same road we took south to Homer the previous year. We stopped at Cooper Landing, and there I tasted the best smoked salmon chowder I’ve ever tasted at a small seafood restaurant called Kingfisher Roadhouse.

It was already later in the summer and my pictures were not coming out as bright. We found the saving grace in the Old Town of Kenai. It was the quaint little Holy Assumption Orthodox Church, built by the Russians at the turn of the 19th century when they still owned the land. Just 15 minutes away, the Fred Meyer grocery chain had — in addition to a parking area where we dry camped for the night — complimentary dump and potable water stations.

Instead of going back to Anchorage the next morning, we headed off to the other side of the peninsula, to the town of Seward at the mouth of Kenai Fjords National Park, another popular Alaska cruise port. I felt that Whittier — the port town where we boarded our Glacier Bay cruise the previous year — was prettier (it rhymes). It was already off-season, so there was hardly a soul on the waterfront. But the boats were all still moored on the marina and the shops were open.

Eight and a half miles west, going out of the town, we saw a sign about Exit Glacier Area. We followed the arrows and arrived at the melting part of the huge Harding Ice Fields. Exit Glacier is so named because it has been receding slowly since the earliest recorded terminus in 1815. The recordings are marked all along the way, and the first one is about two miles from the current one. One can imagine the size of the glacier from the marshland it has created at its foot. There, I finally walked on a glacial ridge. But it was so cold. It was like I was inside a freezer, so I turned back quickly after the photo op and bravely ran to the RV as my husband lingered on.

After Exit Glacier, we made our way back to Anchorage. We did not explore Anchorage as much as we did the previous summer (if you want to, consider the best things to see and do in Anchorage as you plan your stay). This time around, we went on four hikes, all of which were in Chugach State Park in the Eagle River Valley. Each one was under an hour from our base: my husband’s daughter’s driveway.

Another day, we walked along the banks of the Mirror Lake, a favorite fishing spot that the Alaska Fishing and Gaming Office regularly stocks. We also loved the boardwalk along the Turnagain Arm, which winds 1,550 feet from the parking area through the marshland habitat, allowing visitors to see geese, mallards, eagles, and white swans in the Potter Marsh Bird Sanctuary. Then there’s Thunderbird Falls Trail, a 1.8-mile moderate-rated hike in Chugach National Forest. It was about 35 minutes from our base. Midway, at Gorge View, the falls were readily visible.

We also took three day trips from Anchorage. The first was to the Alaska Wildlife Conservation Center, just over an hour away. It is a non-profit organization dedicated to preserving Alaska’s wildlife on about 200 acres. Credited with the reintroduction of elk and wood bison back into the Alaskan environment, the property was full of bears, moose, musk oxen, bison, elk, and reindeer. I had a heyday photographing them.

Also about an hour away, the luxury Hotel Alyeska Resort with its popular ski runs for the winter season was lovely with its lavish lobby, large pond, functional chair lifts, lovely views, and an art gallery. We even treated ourselves to an excellent steak dinner in a cozy log cabin restaurant on the property.

Our third day trip was along Hatcher Pass Scenic Drive, roughly 70 miles from Anchorage. The pass, which is 22 miles (all of it gravel), winds through the mountains. At 4,000 feet above sea level, just after the Independence Mine and about an hour and 15 minutes from our base, we reached the top of the pass, which is the best spot for pictures.

When the soggy Alaska weather changed, we immediately left to get another chance to see Mount McKinley which, at 20,320 feet, is the highest peak in North America. The previous year, the mountain was totally hidden behind the clouds when we took the Denali National Park bus to its closest viewpoint. This second time, we finally saw “the High One.” It was an increasing spectacle as it loomed larger and larger on our drive some 130 miles north of Anchorage. There are several suggested viewing points. We found ours at the McKinley View Lodge near Denali State Park, which is just south of the national park. We camped for the night at one of the campgrounds.

Our next stop: Fairbanks, a little more than two hours north of the state park. There, we checked into Pioneer Park, which has large pull-through spaces for overnight RV parking. It is a 44-acre city park commemorating early Alaskan history with an art gallery, a large carousel, a dance hall, the Palace Theater, and several museums, restaurants, and shops. Built for the Alaska 67 Centennial Exposition, which commemorated the 100-year anniversary of the purchase of Alaska from Russia, it was the best way to get a history of Fairbanks and a view of the Alaskan way of life.

The next day we drove to Creamer’s Field, a 2,200-acre bird sanctuary that is populated by sandhill cranes, mallards, and Canadian geese. The refuge sits on what was the farm of Charles Creamer, who established Creamer’s Dairy in 1928. The refuge was born when he started to save waste grains from his barn to feed the migrating birds. His former home is now a quaint little museum near the refuge.

The real highlight of our Fairbanks day trips was to Chena Hot Springs Resort (one of the 11 best hot springs in the U.S.), a little over an hour northeast of Fairbanks. After lunch at the Chena Hot Springs Restaurant in the main log cabin, we walked around the massage therapy sod log cabins, the outdoor horse park, the main lodge, the outdoor hot spring pools, and an airplane, ATVs, motorcycles, and canoes for rent.

There were several group tours that covered the entire property. We joined one to the Aurora Ice Museum, the world’s largest ice sculpture facility. Some of the sculptures there were already 10 years old. They were crafted by a husband-and-wife team that won the World Ice Sculpting Contest five times. The temperature inside the ice museum is kept at 25 degrees Fahrenheit. Yes, they provide winter clothing to keep you warm inside.

The second tour we joined explored the first low-temperature binary geothermal power plant built in Alaska. Researchers there are working on alternative energy projects, including production and use of waste vegetable oil for fuel. The second part of this tour was to the Chena greenhouse, where the resort uses state-of-the-art technology to nurture plants for their vegetable and flower requirements.

Back in Anchorage before returning to Washington, we were hugely rewarded. The three requirements for seeing the phenomenon of the northern lights are 1) high enough auroral activity, 2) minimal cloud cover, and 3) minimal light pollution. The last one is why it is preferable to see the lights at more remote locations. But we took a chance. The first two requirements were met, especially the first one according to the University of Alaska Fairbanks Geophysical Institute forecasting system. We decided to try the Anchorage Overlook Trail, which is 1,300 feet up on Flattop Mountain and offers an aerial view of the city. It was windy when we arrived at 10:30 p.m. and we were freezing despite our layers. But it was an instant party when the typical greens and other patches of light became active in the skies. They were faint but good enough for me. In fact, there were a few times when striking rays and glimpses of pinks flashed before us.

We also walked on another glacier 90 minutes northeast of Anchorage. At 27 miles long and four miles wide, Matanuska Glacier is the largest glacier accessible by car in the U.S. A valley glacier, solid ice that flows like a river under its weight, moving about a foot a day, it began its retreat to its present-day location about 10,000 years ago. With no significant change in mass for two decades, it still feeds the Matanuska River, 100 miles northeast of Anchorage off the Glenn Highway. We braved the challenging, muddy, and slippery hike onto the ice helped by borrowed cleats after we finally found the trail, which involved following dirt roads from Glenn Highway.

Every visit we made to Alaska affirmed the Last Frontier status of the state. When air travel is no longer risky, we hope we can go back to Alaska, rent another RV, and push Alaska’s limits — and ours — one more time. 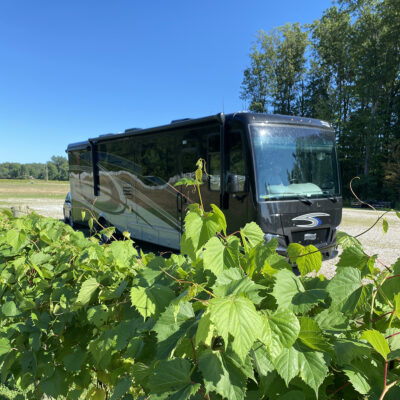 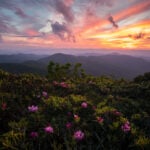 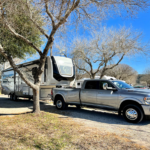 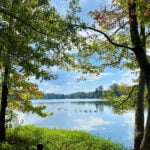