New Orleans is a city unlike any other in the United States. For starters, it’s one of the oldest cities in the country. It boasts a unique, rich culture, the result of African, French, Spanish, and Creole influences coming together in an incredible melting pot. Its food, music, and architecture reflect this diverse heritage and draw millions of visitors every year.

Here are 25 things you can expect when visiting this unforgettable city for the very first time.

1. Be prepared: The party never stops. New Orleans is famous for over-the-top celebrations that pop up as quickly as a summer storm. In NOLA, people hold parades for weddings, birthdays, funerals, and even Sunday brunch. You will find a reason to celebrate around every corner. Embrace it.

2. There’s much more to New Orleans than the French Quarter, but focus on the city if it’s your first time in town. There’s plenty to cram in — too much — in the city’s heart and surrounding neighborhoods. Uptown, Marigny, and the Garden District are other must-explore spots. Make sure you wander outside the Quarter at least once or twice.

3. Some of the top attractions are free, including City Park, the French Market, Jackson Square, Saint Louis Cathedral, and the New Orleans Museum of Art. Seek out these places, and soak it all in! They’re easy on the budget, and you’ll have a great time exploring.

4. Bring a good pair of walking shoes; you will walk a lot, so make sure your feet are happy. In New Orleans, it’s not unusual to walk several miles in a single day. Your Fitbit will be thrilled, and you’ll burn off some of those big Cajun meals!

5. Bring a little cash. New Orleans is a place that’s always marched to the beat of its own drum. To this day, legendary sites like Cafe du Monde and the streetcars don’t take plastic or Apple Pay! Plan to have a few bucks with you at all times so that you’re not stuck looking for an ATM.

6. Don’t call it the Big Easy. No one in New Orleans calls it that. Ever. You shouldn’t, either.

7. You’ll hear music everywhere — it’s inescapable. On the streets, in bars, and in hotel lobbies, jazz and blues are king. Even if you don’t have tickets to a show, plan to stop in and listen whenever possible. Impromptu shows go on at all hours in NOLA.

8. You’ll eat more than you ever thought possible, so embrace it. You can diet later, but for now, enjoy all of the fantastic food this city is known for: gumbo, jambalaya, beignets, and po’boys. And don’t be afraid to go off the beaten path when it comes to dining; you won’t regret it!

9. The bar scene is unreal! You’ll want to check out more than a few bars and taverns — from hole-in-the-wall treasures to lavish hotel venues — for incredibly crafted cocktails and old standards.

10. And yes, you can bring a drink anywhere. There are no laws against open containers here. Grab a cold one in a plastic cup, and bring it along with you as you shop and stroll. Just be sure to pace yourself!

11. About those beads: If it’s not Carnival season, resist the urge to buy and wear them. Off-season, they scream tourist — and, quite frankly, look silly. The best beads are the ones tossed to you from a Mardi Gras float — there’s no need to fake it!

12. You’ll sense the mix of cultures everywhere, from the historic street signs in Spanish to the architecture to the chicory coffee. New Orleans is a place like no other, thanks to the many different groups that settled here hundreds of years ago. You’ll likely hear Cajun and Creole accents, further proof of this city’s enduring melting-pot culture.

13. You’ll feel like you’ve left America behind, with New Orleans’s uniquely European, Caribbean, and African look and feel. But you won’t even need your passport!

14. The Mississippi River runs through the city and serves as its beating heart. Visitors should absolutely make time for a walk along its banks. The river was an entry point to America for hundreds of thousands of people in our country’s early days. Today, the area is home to fun shops and cafes — and, of course, plenty of places to eat and drink.

15. The cemeteries are truly unique. Since New Orleans is below sea level, the deceased are placed in aboveground tombs. On your first visit, make time to tour at least one of the city’s historic cemeteries. You’ll see some famous names and be wowed by the craftsmanship.

16. The streetcar (not trolley!) is cheap, efficient, and fun. Locals and tourists alike take both the lines up to the Garden District and Uptown and down to Canal Street. You should plan at least a couple of rides on this old favorite.

17. Taxis are plentiful in the Quarter, and Uber and Lyft are accessible at all times from your phone, wherever you are. It’s easy to access transportation here if you’re in a rush or tired.

18. It’s not necessary to rent a car in New Orleans, especially if you’re spending all of your time in the city. Parking can be a hassle and expensive, and in a place as walkable as New Orleans, you won’t need a car unless you’re planning on taking a day trip from the city.

19. There are terrific lodging options everywhere. New Orleans has long been a prime convention and meeting destination, and so there are plenty of hotels, from large chains to smaller boutique options. To really get a feel for the city, and for a more homey, intimate feel, consider a home-share such as a or Airbnb.

20. Summer’s a scorcher — there’s no getting around it. Temperatures here can easily reach the mid-90s, and the humidity makes the heat even more oppressive. If you visit during this time, stay hydrated (with non-alcoholic options!) and take breaks inside as needed.

21. Carnival season — or Mardi Gras — is much cooler, but more crowded. If you really want to get in on the party, head to New Orleans from Twelfth Night (early January) until the day before Ash Wednesday. That’s when Carnival is in full swing, with parties, parades, and fun. Many locals escape the city the week before Fat Tuesday for ski breaks. You’ll find some terrific lodging options, but you’ll pay a premium for them!

22. Jazz Fest, another NOLA fan favorite, takes place in late April and early May. At this much-anticipated event, the world’s best-known musicians play for thousands of fans. If you’re headed to New Orleans for this special event, be sure to book your tickets and accommodations early!

Other Things To Keep In Mind

23. You might have some somber moments. For all of the city’s good cheer, locals still talk about Hurricane Katrina and the havoc the storm wrought on their city. While neighborhoods have been rebuilt and residents have returned, the effects of the storm linger more than a decade later.

24. Prepare for the morning after. As we mentioned earlier, New Orleans is legendary for its well-earned party-hearty reputation. So, it should come as no surprise that you’ll likely see people hurting the next day. Once we were strolling along the Riverwalk and saw a young man vomit into a nearby garbage can. We didn’t bat an eye. Each morning, business owners and residents alike hose down Bourbon Street to get rid of the stink from the night before. While it might offend the senses of some, it’s just part of life here. Our advice: Hold your nose, shrug it off, and have fun anyway.

25. Expect surprises around every corner. From a jazz funeral parade to a second line celebrating a wedding or birthday, a fortune teller on Jackson Square, or a delightful antique shop on Royal, adventure awaits on nearly every corner of this cobblestone city. Enjoy it! 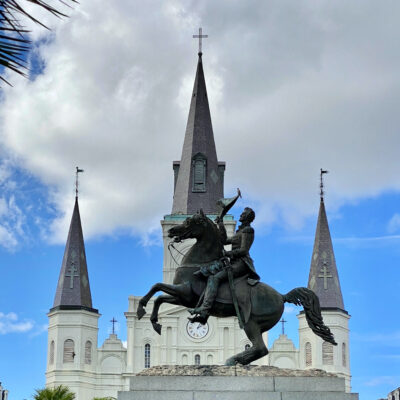 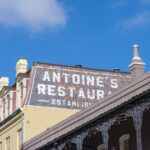 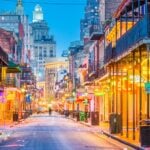