Mention Portland, Maine, and a number of images are sure to come to mind. For most, that will no doubt involve a view of the spectacular Portland Head Light, coupled with cravings for Maine’s succulent fresh-caught lobster served up in the rustic Old Port.

And certainly, those iconic attractions are must-dos on any trip to Portland.

But the city along the Atlantic Ocean’s Casco Bay is much more than that. Portland offers scenic, historic, and sometimes quirky experiences that go far beyond the postcard-perfect Portland Head Light.

From a Civil War-era island fort that was never actually used in wartime, to an opportunity to watch whoopie pies in the making, to a biking and hiking trail that follows an old railroad line through pine forests and a saltwater marsh, the Portland scene is fun and richly layered.

Walk the cobblestone streets of this delightful Maine city, and hidden gems and little-known treasures will appear around every corner. Here are 12 of Portland’s best.

When it comes to lighthouses, the Portland area has almost an embarrassment of riches. While the cliffside Portland Head Light gets much of the attention, a few others shine as well.

Take the lovely Spring Point Ledge Lighthouse in South Portland. Unique for its boulders that form a 900-foot breakwater, Spring Point seems to float above the sea. Visitors can walk along the breakwater to the lighthouse, where volunteers conduct tours on select dates (posted on the organization’s Facebook page). Other lesser-known area lighthouses include the Bug Light and the Two Lights Lighthouse.

Anyone who grew up hearing famous lines like “One if by land, and two if by sea” and “The day is cold, and dark, and dreary” will surely appreciate the fact that the home in which beloved poet Henry Wadsworth Longfellow spent his youth now serves as a memorial to Portland’s most famous native son.

The essence of the poet who penned the classics “Paul Revere’s Ride,” “The Song of Hiawatha,” and “The Rainy Day” is palpable in the 1780s-era family home. In 1901 — two decades after Longfellow’s death — his younger sister Anne Longfellow Pierce deeded the house to the Maine Historical Society as a monument to her brother. Today, visitors can wander through the brick home and adjoining garden. The Wadsworth-Longfellow House is open from May to October. Tours are available for $15.

The route that once carried train passengers between Boston and Portland now attracts bicyclists and hikers in search of recreation and exercise.

Since the early 1990s, an effort has been underway to convert sections of Maine’s long-abandoned old Eastern Railroad line into the Eastern Trail. Along the route, trail users might come upon scenes such as snowy-white egrets wading in the saltwater pools of the Scarborough Marsh, the ebb and flow of the tides in the Portland Harbor, and the pine forests of Kennebunk. The trail begins in the north at the Bug Light in South Portland and goes south to Kittery; it’s more than 50 miles long. While long stretches are separated from roads, trail maps direct users to streetside lanes in other sections.

For the adventurous, Fort Gorges looms as an irresistible destination in Portland’s Casco Bay. Located less than 2 miles from Portland, the island fort is visible from all over the city but is accessible only by small boat. Along with its hidden-in-full-sight status, the fort is fascinating for its wartime history. Built during the Civil War era, Fort Gorges became obsolete even before it was completely constructed, and no troops were ever stationed there, nor battles fought there.

Today, the 1864 fort is open for exploration at your own risk, and can be accessed through sea-kayaking tours.

By official decree, the whoopie pie is the state treat of Maine, and varieties of the marshmallow-creme-filled cookie dessert can be found all over the state. The designation is fraught with some controversy, though, because at least five states — Pennsylvania, New Hampshire, Massachusetts, Virginia, and Maine — claim to be the birthplace of the famous sweet. Maine made it official in 2011, when a bill in the state legislature named the whoopie pie the state treat.

For a gourmet version, head to Cape Whoopies, a bakery/café in South Portland where a glassed-walled viewing area lets you watch a rainbow of flavors — red velvet, peanut butter and chocolate, and dark chocolate and strawberry — being packed into soft-mounded cookies.

From cheddar cheese to wild mushrooms to rhubarb pastries, the Portland Farmers’ Market at the pretty Deering Oaks Park serves up a bold taste of Maine. The open-air market features more than 40 Maine farmers and food producers every week, from spring through Thanksgiving.

Add in whimsical buskers playing classical violin, Jamaican drums, or reading tarot cards, and you have the makings of a memorable Saturday morning.

Seven miles of wide sandy beach, a quaint wooden pier, a Ferris wheel, and fried bread — all in one spot? Yes, Old Orchard Beach delivers the quintessential summertime beach experience just a half hour or so from downtown Portland. For more than 170 years, Mainers have made Old Orchard Beach their go-to summer spot, but the beach is not as well known among visitors from other locales.

Along with the variety of eateries and shops on the pier, the adjacent Palace Playland amusement park offers carnival rides and arcade games. Old Orchard Beach also features lively dining and nightlife options and a host of oceanside accommodations.

Nothing says sea breezes quite like a sailboat, and Portland’s Sea Bags offers a vestige of that salty air, all wrapped up in a fashion statement. Tucked away in the quaint Old Port area, the wood-sided shop sells a wide range of totes, picnic baskets, wine bags, and pillows — all made from sails recycled from working sailboats.

The company says the brightly colored sails “soak up sun, salt, smiles, and adventure,” and that aura is transferred to the nautically inspired bags. “It’s this previous life that makes each bag unique,” says the Sea Bags website. Along with its rows and racks of pretty bags, Portland’s Sea Bags store gives shoppers a glimpse into the production side with its sewing room, where seamstresses create the bags on-site.

Mashed potatoes and donuts may not be your typical pairing, but in Portland, they’re a natural. The Holy Donut, a local phenomenon, got its start in 2011 when the company founder began experimenting with as many local ingredients as possible to find the perfect donut recipe. The winning ingredient turned out to be Maine potatoes — mashed, to give the donuts a moist texture.

Today, the company has three locations in the Portland area. The Old Port location is most convenient for visitors, but for a local atmosphere, head to the original spot on Park Avenue. The Holy Donut now produces two million donuts a year, including creative flavors such as pomegranate, chocolate sea salt, and maple bacon.

It also offers some of the city’s best views of the Portland Harbor.

The spot is relatively serene these days, but 75 years ago, the Bug Light Park area was humming with World War II shipbuilding activity. An estimated 30,000 people — many of them women who came to be known as “Wendy the Welders” — worked at the site from 1941 to 1945, building liberty ships for the New England Shipbuilding Corporation and the South Portland Shipbuilding Corporation. In all, 236 liberty ships and 30 British ocean-class vessels were produced at the spot.

The Liberty Ship Memorial — a steel sculpture in the shape of a ship — commemorates their work.

Located in the lobby of the luxurious, newspaper-themed Press Hotel, the Inkwell café occupies the space that once served as the Portland Press Herald city room. The charming coffee bar and lounge recreate the energy of that busy spot.

Offering coffee and pastries early in the day, Inkwell transitions to small-plate appetizers, cocktails, and local craft beers later in the day and evening. Along with the creative food and drink offerings, another major benefit of Inkwell is that hotel guests and non-guests alike can soak up the fascinating news-focused décor in the hotel lobby, complete with tables topped with historic headlines, and vintage typewriters on the walls. 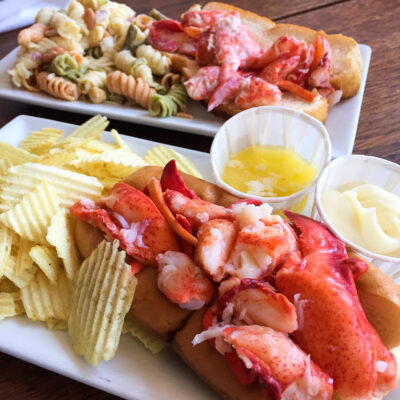 PortlandHow To Do A Lobster Crawl In Portland, Maine 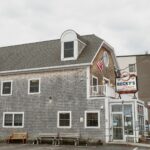 PortlandEating Local In Portland, Maine: The Best Restaurants To Try 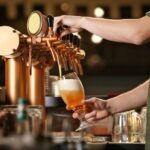 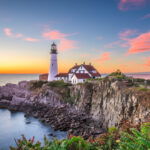 Portland7 Ways To Spend A Day In Portland, Maine