With winter just around the corner, avid travelers will already be thinking about their post-New Years plans, inevitably searching for a warm getaway after the holidays.

Southeast Asia, South America, and Oceania are all regions of the world with more than satisfactory temperatures in the first month of the new year, making them top contenders for the title of best warm-weather January destination.

Humid summer breezes, pristine sandy beaches, and remarkable landmarks and activities are just a few things you’ll find when visiting these classic retreats. We hope you find this list useful in laying your January travel plans for a tropical mid-winter getaway!

A UNESCO World Heritage Site, Valparaíso, Chile has been inspiring poets, artists, and writers for centuries with its hilly streets and vibrant and bohemian spirit. A city for true wanderers and free thinkers, Valparaíso is known for its narrow, winding roads, infinite staircases, panoramic views, and eccentric nautical culture.

Considered a prominent graffiti capital of South America, Valparaiso and its Museo a Cielo Abierto features 20 classic, lively murals from famed Chilean artists such as Mario Toral and Roberto Matta.

To get a genuine feel for Valparaiso’s art culture, Cerro Alegre is surrounded by street art and local bars and restaurants, with foreigners and Chileans alike performing poetry, music, juggling, and more.

The land ‘Down Under’ celebrates summer in January, and Sydney boasts endless sun-soaked beaches, award-winning restaurants, and a rolling wine country.

Besides obvious tourist attractions like the Sydney Opera House, Sydney Harbour Bridge, Bondi Beach, and Darling Harbour, this capital city contains some of the country’s best surf, landmarks, and activities. The U.S. News & World Report has even ranked Sydney number three in ‘Best Places to Visit in Australia’ and ‘Best Adventure Vacations in Australia and the Pacific.’

While Southeast Asia is, in general, a great place to travel year-round due to its overall tropical climate, the Philippines is particularly pleasant in January, despite it being considered the country’s coolest month.

Decked with some of the world’s most pristine beaches, the Philippines has steadily been gaining popularity among tourists, in comparison with other popular Southeast Asian countries, such as Thailand or Indonesia.

Cebu, in particular, provides easy access to some of the country’s most unique activities, including swimming with whale sharks, waterfall chasing, scuba diving, snorkeling, and hiking. While in Cebu, be sure to check out Osmeña Peak, Kawasan Falls and Basilica Minore del Santo Niño.

Situated against the dramatic backdrop of the Southern Alps, Queenstown, New Zealand is one of the country’s top destinations and ideal for travelers who love outdoor adventure.

Take a scenic helicopter flight or boat cruise, go bungee jumping and, for those who like to explore by foot, venture through the endless trails of the region’s Remarkables mountain range. Adrenaline junkies can also partake in mountain biking and ziplining adventures along the challenging 4+ hour Ben Lomond Saddle hike.

Travelers looking for a more laid back retreat can explore the country’s wineries, take a ride on the Queenstown Skyline Gondola, or indulge in a spa day at Body Sanctum Day Spa or The Spa at Nugget Point.

There’s nothing better to get your year started than a trip to one of Thailand’s most prominent beach towns, Krabi.

Choosing which islands and beach towns to visit during a trip to Thailand can be taxing; the majority seem very similar, and choosing the right ones all depends on what you’re looking for during your stay.

If you want a quiet getaway, you’ll be disappointed with Phuket, since this is arguably Thailand’s biggest party destination for young backpackers. Advice from someone who resided in Thailand for over a year: don’t miss out on Krabi.

Cartagena is an exemplary illustration of the juxtaposition of the traditional and the modern. Old Town and Bocagrande are the city’s main tourist neighborhoods, lined with a combination of Spanish-Colonial architecture and trendy new shops, restaurants, and boutique hotels.

Though February/March are undeniably Rio de Janeiro’s most popular months for tourists due to the city’s famed Carnival festival, January brings favorable temperatures and fewer crowds, an ideal situation for travelers seeking a more exclusive excursion.

Fixate upon the city’s most stunning panoramic views with a visit to Sugarloaf Mountain‘s peak and cableway, or visit the iconic Christ the Redeemer statue, one of the world’s largest Jesus statues.

A trip to Rio de Janeiro wouldn’t be complete without a day or two spent at the city’s most popular beaches, Copacabana and Ipanema. You might even catch a glimpse of ‘The Girl from Ipanema’ while you’re there! Speaking of, travelers can head to Beco de Garrafas for extraordinary live entertainment, allegedly the exact spot where Bossa Nova itself was born.

If you’re seeking a less touristy, more authentic alternative to Bali, head to Nusa Penida. This minute island is situated just southeast of Bali in the Klungkung Regency district of Indonesia, separated by the Badung Strait.

While on the island, be sure to catch a Baris Jangkang dance, a traditional Hindu-Balinese ritual originating in Nusa Penida. Presumably the most photographed spot in Nusa Penida, Kelingking Beach overlooks the Indian Ocean, bounded by emerald waters and rugged steep cliffs.

Insider Tip: Hiking down Kelingking Beach is an extremely rigorous and dangerous trek. Only fairly fit people with appropriate shoewear should attempt this hike; be sure to also bring a liberal amount of drinking water along the way. Those who do reach the bottom will be greeted by the most striking and untouched white sandy beach, with only traces of footsteps to be seen.

There you have it. We hope we gave you a few ideas to warm you up when January rolls around. Happy trails! 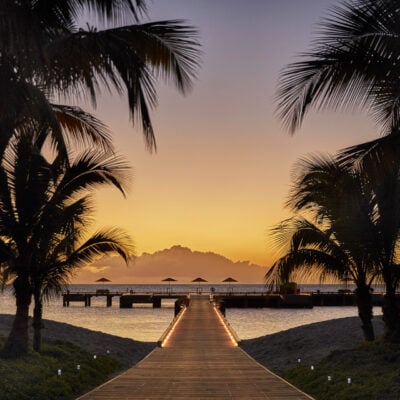 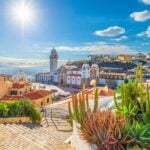 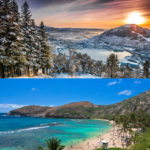 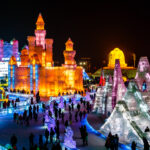