Take A Peek Inside The Largest Cave Castle In The World

Perhaps you’ve seen a cave. Maybe a castle. Probably cliffs. But have you ever seen them entwined in such a way that it’s hard to know where one stops and the next begins?

My husband Dean and I spent 3 days in Slovenia’s capital city of Ljubljana as part of the VBT pre-trip extension for our biking trip in Slovenia, Austria, and Italy. It seemed wise to get to Slovenia early so we could adjust to the time zone change before the actual cycling began.

Little did I know that this would give us free time to tour the spectacular Predjama Castle, the largest cave castle in the world. It has been perched in the middle of rocky Slovenian cliffs for more than 800 years. To add to the intrigue, somewhere beneath all that stone lies an intricate network of caves and tunnels.

Come along with me to learn more about this amazing place.

More than 400 feet high, the Gothic-style Predjama Castle is embedded into rock. Historical records of the castle date back to the 12th century, but archeological finds near the castle show human inhabitation as early as the Stone Age.

In 1570, the castle was rebuilt by Baron Phillip von Cobenzl with a Renaissance look and feel. Eventually, a wealthy family, the Luegers, acquired and developed plans for the expansion of this architectural wonder.

What is a castle without a foolhardy knight? Part history, part legend, part warrior fabrication… who can say? (If we looked hard enough, I’m sure we could find a damsel in distress!)

As the legend goes, the Imperial Governor of Trieste owned the castle in the 15th century, and his family, including his son, the not-so-honorable Knight Erazem Lueger, lived there. Through a series of events, Erazem made enemies with the Habsburgs of Austria and Austrian emperor Fredrick III. The emperor rallied his army to capture and kill Erazem, who fled to Predjama Castle.

The army’s plan was to starve out the castle dwellers by cutting off their food supply. To their amazement, Erazem and company held their ground for more than a year. How did they do it? Through an elaborate, hidden network of caves and tunnels to bring food and supplies into the castle!

Not only were they not starving, but they also apparently loved to flaunt their abundance of food by bombarding the enemy army with fresh cherries. Another time, it’s said Erazem delivered an entire roasted pig to them. So much for starving them out!

How then did Erazem meet his demise? The poor fellow was occupied in the castle’s restroom (on an outside wall for easier waste disposal) and a disloyal servant ratted him out to the enemy, who launched a strategically placed cannonball at a precise, inopportune time for Erazem.

Erazem was history, and the rest is history. The army invaded and assumed the strategic position of Predjama Castle. Or so the story goes…

It was remarkable to walk through this merging of castle and cave and cliff. We saw this combination everywhere. For example, we walked on floors that were obviously part of the castle, but an adjacent wall was the natural cliff.

We took a 60–90 minute self-guided audio tour through the castle. The castle has fascinating features, and the audio tour was quite entertaining and full of detail.

Pro Tip: Predjama Castle is a popular attraction that caters to visitors from all over the world; be sure to get the audio in the right language. Options that I saw included Slovenian, Italian, German, and Chinese.

As we moved through the castle, we got to a higher floor toward the front of the castle, and the audio tour encouraged us to peer down a chute. I looked down to see the castle’s drawbridge and moat. Why this view?

The audio filled in the gaps. Apparently, one defensive tactic was to dump scalding water, hot tar, or large boulders down the chute onto enemies who tried to penetrate the castle. That would slow them down!

We toured several bedrooms, which were rather elegant and stately. The dining room was a large room, perfect for medieval feasting. Other rooms included a modest chapel and a large weaponry room with suits of armor, battleaxes, crossbows, and the like. We even saw a medieval torture chamber (yikes) located in a dungeon (where else would it be?) with a stretching rack and other “equipment” we won’t discuss.

We climbed a series of long and winding stairs to get to Hidden Cave, which appeared to be a landing with high, rocky ceilings. (Perhaps Erazem hid here?) From this vantage, we could see through a large opening into the Slovenian countryside.

We saw a large horizontal container near the ceiling that was used to collect rainwater. Pipes in the walls also funneled rainwater to other central collection points.

When we finished touring the castle, we rode in the shuttle about 6 miles to the next stop: Postojna Cave.

Under The Castle: Postojna Cave Park

As if the world’s largest cave castle weren’t fascinating enough, a network of tunnels and caves exists under the castle and into the area (perhaps there’s some truth to the Erazem legend?).

Postojna Cave, nicknamed “Queen of the Underground World,” is a system of 11 interconnected chambers. The whole area is called Postojna Cave Park. Discovered in 1818, it features about 15 miles of underground passages, galleries, and halls.

Pro Tip: The official entrance to the cave is about 15 minutes from the castle. You’ll either need your own transportation, to book a shuttle as part of a package (like we did, through our hotel), or take a shuttle between the two attractions, if it’s available.

The tour of Postojna Cave marked a first for me. I’ve toured caves before, but I’ve never taken an underground train to get deeper into one. We rode this unique railway for about 10 minutes through a series of corridors and chambers. At times, the track wound into areas where the ceiling seemed so low or the walls seemed so close that I instinctively ducked, although there was always enough clearance.

Another “first” on the train: We saw a chandelier in a large chamber of the cave!

When the train stopped, a guide took us through the cave for about 90 minutes, and we saw a variety of features, including the Stables, Main Passage, White Hall, and even Concert Hall with incredible acoustics.

The walking was very good (for a cave) — it was paved, the cave was lit, and some of the rocks were backlit. The cave is also apparently home to a colony of bats, but we didn’t see them.

We crossed over a walkway called the Russian Bridge that was built in 1916 (and likely renovated since). Later in the tour, we also walked underneath it.

Pro Tip: We weren’t here over the holidays, but the traditional Living Nativity in the cave features more than 100 actors and musicians who bring 16 biblical scenes to life along a 3-mile route illuminated by 2,100 lights.

Predjama Castle is a 45-minute drive from Ljubljana, and Postojna Cave is another 15 minutes from there. Tickets are required at these attractions.

We booked this tour through our hotel in Ljubljana, and it included transportation, the audio tour of the castle, and a guided tour of the caves (where we joined a much larger tour group). The drive and tours easily took us the entire morning; timing varies based on how quickly or slowly you move through the castle’s self-tour.

The word predjama means “in front of the cave,” but in the case of Predjama Castle, the cave is behind it, underneath it, and all around it! I hope you enjoyed this peek inside this amazing place. It’s a picture-perfect combination of cave, castle, and cliff. Part lore, part fact, part legend: just what a medieval castle should be!

Pro Tip: There are stone steps and some uneven pavement in the castle, so watch your footing. When you tour the cave, dress in layers because the cave and train ride can feel cool. 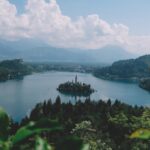