Cape Breton Island Vs. The Island Of Newfoundland: 6 Key Differences To Know

There’s an old joke in Canada that Cape Bretoners are just Newfoundlanders who ran out of money on the way to Toronto. The quip never fails to get a few laughs, but neither Cape Bretoners nor Newfoundlanders like it much. As both groups will tell you, the two islands might have much in common, but they’re very different places.

Cape Breton Island is part of the province of Nova Scotia. Its 3,981 square miles are home to about 137,000 people, many of whom claim Scottish, Irish, English, Acadian, or Mi’kmaq heritage. Its most populated area is the city of Sydney in the northeast, and the island is connected to mainland Nova Scotia via the Canso Causeway.

So whether you’re lost while trying to find Toronto or just keen on exploring eastern Canada, understanding the differences and similarities between these two islands will help you have a better trip.

1. Transportation And Getting Around

Most people visit Newfoundland either by flying into St. John’s or by taking the ferry over from Cape Breton Island. Ferry passengers can choose from short routes to Channel-Port aux Basques or the longer voyage to Argentia (not far from St. John’s). Additionally, some visitors visit by flying into alternative airports like those at Deer Lake and Gander. It’s also possible to arrive by driving through Labrador and then crossing via the ferry at Blanc-Sablon, Quebec (which is just by Labrador’s border).

DRL bus offers public transportation between St. John’s and Channel-Port aux Basques with two dozen stops in between. It’s reliable and reasonably affordable (going all the way to Channel-Port aux Basques costs about $152) but slow going. All those stops add up and those doing the full route can count on a 14-hour day. For most visitors, renting a car at the airport or taking your vehicle across the ferry is the most pragmatic option.

Those visiting Cape Breton Island almost always do so by driving up from mainland Nova Scotia. Most visitors enter the province by flying into Halifax or driving over via New Brunswick — and in some cases, taking the ferry from Maine to Yarmouth. There is one airport on Cape Breton Island that services limited commercial fights in Sydney. And, of course, those in Newfoundland can take the ferry!

Maritime Bus offers public transportation in Cape Breton, with service in Port Hawkesbury, Whycocomagh, Wagmatcook, North Sydney, and Sydney. However, much like in Newfoundland, having a car is the most practical option for nearly all visitors.

Get ready for some debate! Both Cape Breton Island and the island of Newfoundland have incredibly loyal fans and are equally famous for their stunning landscapes.

Cape Breton Island is notable for its northwest coast, home to the world-famous Cabot Trail. This scenic ocean-side drive is often lauded as one of the most beautiful routes in the world and is a must-do attraction.

While Cape Breton is all rolling hills and ocean vistas, Newfoundland is more extreme in many ways. It is, as locals like to say, a rock in the North Atlantic. Nothing quite looks like it. There are many barren areas, where the stark beauty and dainty wildflowers are often overlooked in favor of much more dramatic spots, like Gros Morne National Park. This popular destination for unspoiled nature looks like it would be right at home among Norway’s fjords.

Both Cape Breton and Newfoundland are home to numerous fishing villages, but those in Newfoundland are arguably the most famous, set in craggy nooks and sea-beaten crannies, often extremely isolated from their neighbors.

Both Cape Bretoner and Newfoundlander are famous for having accents. As someone who has lived in both areas, I don’t notice it — but apparently, I’m the only one! A little research tells me that Cape Breton has three distinct linguistic areas: the Western or Scottish Gaelic accent (Inverness, Judique, Mabou, the Margarees), the Industrial accent (Sydney, Glace Bay), and the French Acadian (communities surrounding Cheticamp, L’Ardoise, and Isle Madame).

Newfoundland has its own distinct dialect, Newfoundland English. It’s heavily influenced by old Cornish dialects in England and those in southeastern Ireland and also by the generations of fishers and traders coming from Europe. Some visitors make the mistake of assuming those who speak Newfoundland English perhaps aren’t particularly sophisticated, but in fact, the opposite is true — many of the words and expressions you hear are peppered with hints of Spanish, Portuguese, French, and more.

Speaking of the power of words: Most people who live on Cape Breton are happy to be referred to as Capers or Islanders. You might occasionally hear someone who will emphasize that they are Cape Bretoners first, not Nova Scotians.

However, those who live in Newfoundland don’t always welcome the term “Newfie.” While they’ll often use it among themselves (and proudly so), the term has been used in a pejorative and even insulting way by other Canadians. Telling “Newfie” jokes isn’t appreciated in the least.

Cape Breton Island’s growing conditions are generally more favorable than those in Newfoundland and Capers also have the advantage of easy transportation links with southern Nova Scotia’s fertile Annapolis Valley. As such, you’re more likely to find a greater variety of fresh produce in rural Cape Breton as compared to rural Newfoundland — in general. But in reality, it does vary from town to town. In both locations, farmers markets are increasingly popular, and creative techniques are employed to extend the growing season.

In Newfoundland, visitors can expect to find Jigg’s Dinner (a hot meal of salt beef, root vegetables, cabbage, and peas pudding) and Cold Plate (a huge serving of cold turkey, ham, several kinds of potato salad, assorted veggies and salads like coleslaw or macaroni, and perhaps some pickles on the side).

Other Newfoundland favs include moose (if you see sweet and sour moose served over rice, grab it!), toutons (fried bread dough with butter and molasses), bakeapples (a pale berry known as cloudberries in Scandinavia), fries-dressing-gravy (French fries smothered with gravy and a bread dressing infused with summer savory), and cod au gratin (cod is king in Newfoundland and this creamy, cheesy dish got a shout-out in the Broadway play Come From Away).

On Cape Breton Island, keep your eyes open for unique Acadian dishes in the community of Cheticamp. Chicken fricot, a delicious chicken and veggie soup with small dumplings, is year-round comfort food. Dense meat pies, filled with pork and beef, are another Acadian favorite. Bread from Aucoin’s Bakery is beloved all over western Cape Breton and is commonly called “Cheticamp bread.” Meanwhile, around Sydney and Glace Bay, you’re likely to find homemade pierogi and other Ukrainian and Eastern European-influenced dishes, a testament to the area’s coal mining heritage.

In both spots, few things are as important as tea. As a beverage, it’s served strong and in Newfoundland, often with a dollop of evaporated milk instead of fresh. But tea is also an act, a service, and an experience. You’ll see tea offered at community meetings, village concerts, and an hour or so after meals and it comes with homemade cookies, squares, biscuits, and sandwiches. In Cape Breton, Fat Archies (plump molasses cookies) are common, while in Newfoundland it might be Lassy Buns (they’re like a cross between Fat Archies and a tea biscuit).

In general, you can expect to pay more for goods and services in Newfoundland than in Cape Breton. That’s the price you pay for being in an isolated area. However, there are a few expectations. As St. John’s is a provincial capital and a much bigger city than Sydney, there are many more stores, which is good for competitive pricing. I’ve also found that rural bed and breakfasts and basic cafe fare are often cheaper in Newfoundland than in Cape Breton.

Unfortunately, both Cape Breton and Newfoundland have one very sad thing in common these days. Both were severely affected by Hurricane Fiona in September 2022. Fiona was the strongest and costliest tropical cyclone to ever hit Canada. In northern Cape Breton and southern Newfoundland, the damage was nothing short of devastating. Visitors can help support the affected areas by donating through the Canadian Red Cross and by spreading the word that the tourism industry is still thriving and working hard to help rebuild damaged communities.

For more on Canada, explore these articles: 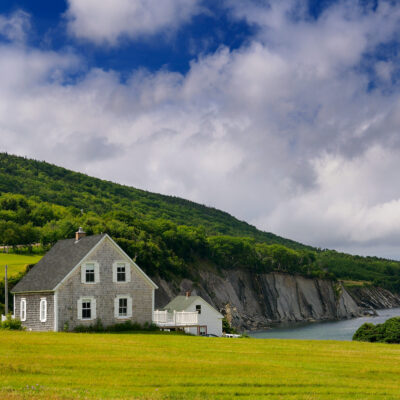