The day before I flew my scheduled trip to London, Queen Elizabeth II died. I didn’t know what to expect. Despite the world’s sadness, I thought, What a privilege it was to experience this once-in-a-lifetime event. In my mind, it was very similar to the outpouring when Princess Diana died.

After taking a quick nap after our 11-hour flight, I ventured out of our hotel near Victoria Station. It’s a quick, easy, four-block walk to Buckingham Palace. We were fortunate to be so close to the Palace.

The public transportation this summer in London has been dreadful. If it’s not a subway or train strike, the local buses are overflowing with people and service is reduced. I was glad to be walking!

As I exited my hotel, I felt like I was back home on the 405 Freeway in Los Angeles during rush hour. I literally had to “merge” into the swarm of people walking up my street. Keep up or get run over! I accelerated and jumped into the path of people walking briskly, flowers in hand, as if a magnet was pulling them toward the Palace.

Hundreds, and I mean hundreds of people, were flocking to the gates of the Palace. They were quiet and definitely being respectful; no one shouted or yelled. News crews from the world over carved out space to set up their cameras on recently closed streets, prepared to send videos back to their home countries.

As I arrived near the Palace gates, I saw thousands of people lining up in queues to walk and peer into the gates. Normally this area is open to cars and pedestrians, but due to the forecasted crowds, it was closed. Occasionally a car would pass by, leaving the Palace to exit and the masses would surge closer to the fences that surrounded the edifice. It startled me and I thought, This is what a stampede is like.

It was fascinating to see the thousands of people queued up to walk through and look at the Palace, then exit. I noticed the overflow of flowers spilled down into the gardens below the Palace.

A Detour To Green Park

Green Park is an enchanting park with ponds, trees, and paths directly across from the Palace plaza. According to myth, Queen Catherine demanded the park be “flower free” after she caught King Charles II plucking flowers for his mistress. It has remained flower free until now! Flowers brought by the people now make rows and rows of concentric circles around the trees.

They bring color to the stories, notes, tributes, Paddington Bears, and sweet cards from children, stating their love for their Queen. It warmed my heart as I read the many notes, kind words, and personal fondness and love for Queen Elizabeth II. Everywhere I walked I could see the floral tributes.

On To Westminster Abbey

I continued my walking tour over to the Westminster Abbey area. En route, I saw almost every business, restaurant, and hotel had some type of homage to their Queen visible within its entrance. Some had elaborate framed images, others had a formal table with teapots, and some had darling Paddington Bears. The flowers around the Abbey were just as impressive.

The Queen’s funeral, scheduled to take place Monday, September 19 (details available here), is forecasted to have 4.1 billion viewers online. My view as a Yankee is that the people of Britain truly adored this great lady. She possessed class, honor, devotion to service, and love for her country. She definitely held the Country and Commonwealth in her hands and will be dearly missed. God Bless the Queen. 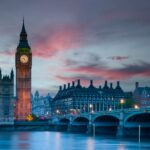