This Week’s Full Moon Is The Last Of Its Kind This Year, Here’s Why

Known as the Sturgeon Moon, the full moon on Thursday, August 11, will be a supermoon and will appear 14 percent larger and 30 percent brighter than some of the other full moons. You won’t want to miss it either: The Sturgeon Supermoon will also be the last supermoon of 2022.

Why It’s Known As The Sturgeon Moon

The Old Farmer’s Almanac uses moon names from a number of places, including Native American, Colonial American, and European sources.

August’s full moon was traditionally called the Sturgeon Moon by Native Americans because the giant sturgeon of the Great Lakes and nearby Lake Champlain were easiest to catch during August, according to The Old Farmer’s Almanac.

These prehistoric-looking fish, which can live up to 150 years, have been traced back to around 136 million years ago and are often called “living fossils.” Some sturgeon have grown to be 7 feet long and weigh more than 300 pounds, according to Great Lakes Guide.

Why The Sturgeon Moon Is Also A Supermoon

The moon’s orbit around Earth is elliptical, rather than circular. Although the distance between the moon and Earth varies throughout the month and even the year, the average distance is approximately 238,855 miles, according to NASA.

Since the moon has an elliptical orbit, there are times when it is closer to Earth than others. The point in the moon’s orbit when it is closest to Earth is called the perigee. When the moon is full and it reaches that point, it’s called a supermoon.

There isn’t an official definition explaining how close the moon must be to Earth to be considered a supermoon. Astrologist Richard Nolle first used the term “supermoon” in 1979, and in his definition, Nolle explained that a full moon or new moon is a supermoon when it’s within 90 percent of its closest point to Earth, according to EarthSky.

While the average distance from Earth to the moon is 238,855 miles, on August 12, however, the moon will be 224,569 miles from Earth, making it a supermoon, EarthSky explains.

How To See The Sturgeon Supermoon

You can determine the exact time of moonrise in your area using The Old Farmer’s Almanac’s Moonrise and Moonset Calculator.

Here’s why the time of moonrise is important. You’ll want to make plans to see the Sturgeon Supermoon when it’s just above the horizon because that’s when it will appear largest due to what’s called the “moon illusion.”

The moon, of course, doesn’t change size, but the moon illusion tricks our brains into thinking it sometimes appears larger or smaller. For instance, when the moon is high in the sky, it appears small due to the vast scope of the surrounding sky, NASA explains.

On the other hand, when the moon is just above the horizon, our brains compare the moon’s size to other objects on the skyline, such as trees, buildings, or water towers. Compared to those objects, the moon, of course, seems absolutely massive.

Finally, since the moon illusion occurs when it is low in the sky, the best place to see the Sturgeon Supermoon will be somewhere with an unobstructed view of the horizon. Large fields, parking lots, and other places that don’t have trees or buildings blocking the horizon will be good places to see the Sturgeon Supermoon at its largest and brightest.

A Problem For Stargazers

Unfortunately, the Perseid meteor shower, which even NASA says is “considered the best meteor shower of the year,” occurs each year from July 14 to August 24. The shower’s peak will be overnight on August 11 and in the pre-dawn hours of August 12, according to the American Meteor Society (AMS). That means the shower’s peak will occur when the Sturgeon Supermoon will be bright in the sky.

“The full moon’s brightness will wash out the Perseids as they streak across the sky on their peak nights, so your best shot at catching the Perseids will be a few hours before dawn, when the moon is closer to setting,” according to The Old Farmer’s Almanac.

You can learn more about the Perseid meteor shower in The Most Popular Meteor Shower Of The Year Takes Place This Month, This Is The Best Time To See Them.

Be sure to also visit all of our stargazing content, including: 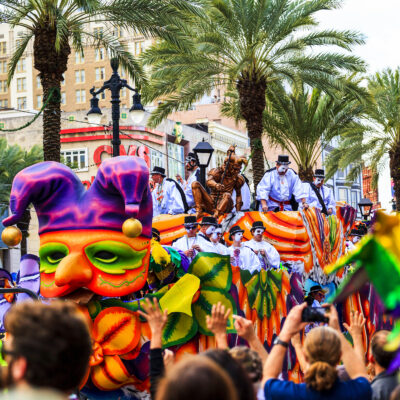