Arriving late, the city was partially lit by its minimal street lights. From the backseat of my taxi, I moved from side to side, looking for street signs and hoping to register every little detail no matter how dark and obscure. My anticipation grew s the fare continued, making me anxious to re-visit these locales at my earliest convenience.

As we drove closer to my hotel, I began to hum along to a familiar beat being broadcast from seemingly all directions. It took me some time to recognize that it was Richie Valen’s “La Bamba,” to which my driver informed me that the song originated in the region in the late 1930s.

Arriving at my destination, I watched as the nearby nightclubs filled with clientele. Outdoor seating at an adjacent restaurant stayed mostly empty, except for a single couple flirting over drinks. The main square, only a block away, made me eager to visit, but I was tired and needed rest. Yet the entire scene punctuated the reasons why I wanted to be there.

My visit to Veracruz, which translates as “True Cross,” had been planned in my mind for over a decade, but only recently did I decide to visit.

Instead of exploring, I checked into my hotel. There would be plenty of time to sightsee. My curiosity would just have to wait for one more night.

My interest in Veracruz began in my father’s library with a book about U.S. relations with Mexico in the early 20th century. That book sparked my curiosity that persisted into my adulthood. Later in life, I learned about Hernan Cortez, a conquistador who came for riches. He used the region as his port of entry (1519) and went on to defeat the Aztecs and King Montezuma II. This tapestry of stories and history became quite an allure as I anxiously tossed and turned, awaiting the opportunity to explore.

When the sun was up, so was I, and I made my way to the best starting point in any Mexican city.

Zocalos serve as the main square for most major Mexican cities. Mornings are typically quiet. A few workers rush from one end to the other as part of their morning commute. The sidewalks are wet from either the morning rain or a thorough cleaning made in the middle of the night. In the mood for breakfast, I walk to La Fonda de las Gordas. Already knowing what I want, the motherly staff grinned at the excited expression on my face as I make my order: gordas y picaditas Veracruzanas.

As the afternoon arrived, families start making their way into the area. I make my way to another corner of the zocalo, walking past gleeful children whose faces were sticky with ice cream purchased from a vendor.

Shoe shiners make the rounds looking for shoes they judge to be in rough shape and in need of their services.

Restaurants open their doors to arrange outdoor seating while gesturing at possible patrons to look at their menus.

Mariscos Villa Rica Diligencias became my go-to for mid-day drinks and to get another perspective of the square due to its location at the back of the square.

The evenings are energetic. Cigar vendors approach offering a wide selection with a laminated menu of options. If you have a preference, they will let you know if they can find it for you. Entertainment begins as soon as the sun sets.

On the days that I was in town, Mariscos, which is part of the Gran Hotel Diligencias, outdoes itself with a full band and live singers.

Visit Flamingos Bar for more traditional music or Rock & Burger for 60s and 70s cover bands served with burgers, fries, and beer until the last Led Zeppelin or Beatles cover ends the night.

Make your way past the calls for guera, guera, guera, a delicious frozen treat for which workers call out the brand name to get your attention.

Early or late afternoon is the best time to start your exploration of the sea wall (El Malecon). Begin at the visitor’s booth (Mario Molina and Av Landero Y Coss) then move through the artisanal shops to see if there are any good souvenirs. Find the Letras de Veracruz for a photo opportunity then turn around to view the Faro Venustiano Carranza (lighthouse).

Continue following the Malecon to find a collection of food stalls near Artesanians — Mirador. Return in the evening, especially to the area in front of the Foro 99 theater. It is at that time it turns into a hub of activity as more food carts showed up in the evening and impromptu musicians turned the area into a mini zocalo.

If you are in the mood to relax in the sun and have a bite, have a seat on one of the beach chairs left on Playa Villa del Mar. There will be a waiter anxiously awaiting your arrival.

Undoubtedly, you noticed the fort in the distance while walking the Malecon. Also known as the Castle of San Juan de Ulua, the easiest way to arrive is by taxi. Leaving early, you can find plenty of taxis to take you back, but it is best to arrange your return trip in advance.

San Juan de Ulua has served multiple roles since its construction began in 1535. From a fort, a palace, and a prison, it has grown over its life with each itineration. Once holding a young Francis Drake, it became an important area during the Mexican War of Independence. Over time, its role evolved into the Presidential Palace for leaders such as Porfirio Diaz, Benito Juarez, and others.

During its time as a prison, it was said that sharks kept anyone from escaping.

For those in the African diaspora, Veracruz takes on an added significance. Due to the region’s role as a major port, it allowed for the importation of African slaves. Their stories are perfectly retold in the town of Yanga.

Wanting to learn more, I arranged for a tour with local historians Antonio Herrera and Efrain Blanco of Consejos Afro Veracruzano (Afro Councils of Veracruz) of Mata Clara, Yanga, and Cuitlahuac. As we talked, walked, ate, and visited the Museo Regional de Palmillas, the history of the region was told to me.

Gaspar Yanga was a possible West African prince who led a successful slave uprising. This earned him the title of the first liberator of the Americas. He used his intelligence and guile to establish a community of Africans and served as their leader. Successful in his efforts, 40 years passed before the Spanish attempted to confront him again. By this time, he had built both a community and his own military force once again thwarting the authorities and defeating them in battle.

He eventually negotiated a peace that gave his people freedom and allowed the community to grow. The story of Yanga is firmly in the hearts and minds of the locals. The UNESCO Heritage Site once known as San Lorenzo de Los Negros mostly attracts scholars, but everyone is welcome to hear their stories.

Wanting to change gears, I decided to go kayaking with the tour group Manglareando. Gracias for their patience with me, as this group of biologists and artists took my group around the Laguna to not only educate us about mangroves but also to warn us what the loss of them would do to the environment. This was highlighted by the possible loss of the very mangroves we were learning about.

I met Rodolfo, one of the fishermen who quickly became my favorite person in the area. We took a break on a small island to enjoy homemade liquors and seafood. We wrapped up with a few shared beers on the mainland before heading back, and I was filled with a sense of pride that I had survived my first kayaking experience.

On one of my last days in Veracruz, I took a private tour with Marcela Cardozo to learn more about the impact Indigenous and Afro Mexicans had made on the region. What I did not expect was how the locals in the town of Jamapa would treat me. After picking me up, we visited the Museo Comunitario de Jamapa and were introduced to Alejo Castillo Rivera, a teacher, who taught me about Remojadas culture and life. It was after that experience that a grand impression was left on me.

I met many people — Dona Tana, the local healer, the Escaramuzas (Female Rodeo Queens), basket weavers, town gossip women, a class full of Afro-Mexican children who were learning their history that was left out of Mexican history books, the mayor, and finally a Fidel Castro lookalike.

The feeling of being overwhelmed does not sufficiently describe what I felt while there. It was never the sense that they did anything wrong but rather that I was grateful that they treated me so well.

I had started this adventure wanting to flesh out stories from old faded books to have a tangible memory instead of words. What I got was more than I expected.
Although I focused on very specific places in and around Veracruz, there is a lot that I left out, from the nightlife and restaurants of the Huaca neighborhood — which provided homes for migrants in the late 19th century — to the remains of a Spanish fort in the middle of town and the beaches of Boca del Rio.

There is just so much to be found in the true cross of Mexico. I just hope that you will go there and find it.

For more on Mexico, check out these articles: 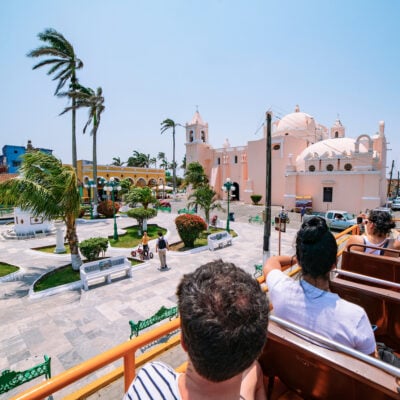 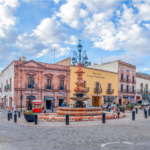 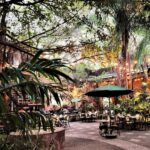 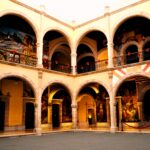