5 Diverse And Colorful Towns To Visit Around Mazatlán, Mexico

Every year, we drive down to Mazatlán. Having a car there has been handy for quick trips for shopping, eating out, and even going to the dentist; but it has also enabled charming day trips to towns around the city. Since the resort where we stay also arranges tours discounted for “owners” like us, we have explored these five diverse, colorful towns in four winters here.

El Quelite, north of Mazatlán and only about 30 minutes away, is one that many people rave about. Approaching it, a bright yellow arch mark and large bougainvillea bushes of many colors mark the entry to the lone street. Colorfully painted homes line both sides, and at a small square, or plazuela, a statue of a man playing ulama (an ancient sport currently being revived) stands out.

We found all the vehicles parked around El Meson de Los Laureanos. We soon discovered why this is the town! You won’t believe the art and decor, the roosters and horses, all the colorful nooks and corners, all the thriving plants, and the warmth of the people inside. It was the energy of Mexico in a nutshell, including some of the best Mexican food you can have.

Pro Tip: Don’t forget to visit the small chapel to the right of El Meson!

El Rosario, just an hour south of Mazatlán and with a population of about 16,000, is a Pueblo Mágico, one of 132 selected by the Mexican Secretary of Tourism for exemplary beauty, history, and/or culture. It’s the hometown of Lola Beltrán (1932–1996), the acclaimed singer of ranchera music (a popular Mexican genre) best known for her song Cucurrucucú Paloma. There is a museum dedicated to her.

Just across from the museum, you will find Las Ruinas, the remains of the parochial temple that crumbled in 1931 when miners took aim at a large silver belt they discovered right under it. The town’s faithful painstakingly transferred the beloved church, stone by stone, to this present site.

In 1935, hurricane floodwaters created a lagoon at the old entrance to the mine and near the former site of the temple. Today it’s a recreation area called Isla del Iguanero.

A visit to the Church of Our Lady of the Rosary, built from 1758 to 1771, will be a delight. See its elaborate baroque style and behold its intricately gilded altar. You will also enjoy taking photos at the colorful town sign, with its pair of huge golden wings, and the monument to Lola Beltrán at her plaza!

Pro Tip: Have lunch at the House of Lola Beltran and do a quick trip to the Museum of Regional History of El Rosario, built in what was formerly the Municipal Prison. You will find out that the town was one of the wealthiest in Mexico and that its mining industry led to the founding of the port of Mazatlán.

Technically, Stone Island is a small peninsula jutting off the southern part of Mazatlán, created in 1936 as an ejido, a communal land for cooperative farming. The lack of irrigation systems eventually ended the agricultural project, so the townsfolk turned to fishing. Soon they discovered that the island’s beaches were calmer and warmer because of their protected location. Enterprising residents constructed ramadas and palapas, and today there are about 50 food establishments, four hotels, and about 8,000 residents.

A road connects Stone Island to the airport road, but we were told it is very bad. So we drove to the last stop of the Green Bus and boarded a panga from the Playa Sur Embarcadero.

As soon as we were let off from the panga, all 40 of us were brought to the Playa Sur Ramada by a three-carriage contraption pulled by a tractor. My husband and I immediately rented an ATV. We were having a ball until our vehicle stopped dead in its tracks almost at the limits of where we were allowed to go. While waiting to be rescued, we marveled at the miles and miles of glorious beach running alongside a seemingly endless coconut grove, said to be one of the largest in the world.

Upon our return and after lunch, there were many things to do besides swimming and snorkeling. Horseback riding, jet ski cruising, banana boat and kayak paddling, and hammock napping; snacking on fresh oysters, shopping for local crafts (such as bags, jewelry, clothes, or colorful ceramic art), hiking the inner island or the coconut grove, playing volleyball or soccer, or having a massage. But at 2:30 p.m., a horn signaled the trip back home.

Pro Tip: Some folks enjoy playing with the large iguanas here, which are harmless to humans. If you do interact with them, treat them with care.

Last month we won two seats at the Tequila Tour that goes to the small town of La Noria, population 725, just 35 minutes away. On the way there, we stopped at a very small village called Puerto de Canoas, where the fascinating Mexican dancing horses are housed, trained, and taken care of. They belong to the Azteca breed and have become mainstays of the Carnaval de Mazatlán.

This was followed by a trip to the 130-year old La Vinata de Los Osuna, Sinaloa’s only tequila and mescal distillery (and the largest blue agave plantation in the state). Its product is labeled “100% blue agave” because the term tequila is legally reserved for the nearby state of Jalisco, where the plant grows best.

Our last stop was La Noria, a lovely colonial village founded in 1565. Some mines are still operating; but it is better known as home for many traditional crafts, especially pottery and leatherwork, including saddles, sandals, and belts. The plazuela features the colorful town sign and the antique church of San Antonio.

Pro Tip: If you want to bring home a bottle of “tequila,” take the extra-aged one. It is so smooth.

We chose to buy the tour to the city of Durango even though we had to wake up at daybreak and return long after sundown. With a population of almost 600,000, it is the capital and the largest metropolis in the Mexican state of Durango. The driving time to the mountain city, at an elevation of 6,168 feet, is 2.5 hours.

The trip goes through the Carretera Interoceánica (Interoceanic Highway), which connects the Gulf of Mexico and the Pacific Ocean. The highway begins at Reynosa, just west of the Port of Brownsville, Texas, and ends near Mazatlán. It shortens the time between Durango and Mazatlán by 6 hours, crossing the Sierra Madre Occidental through 63 tunnels and over 115 bridges.

The Baluarte Bridge, a cable-stayed bridge stretching 3,688 feet with a span of 1,710 feet at the center, is the most spectacular on the Carretera Interoceánica. With the road at 1,322 feet above the valley below, it is the highest cable-stayed bridge in the world, the highest bridge in the Americas, and the world’s third-highest bridge overall. It opened to traffic in 2013.

Now, onto the town itself. If you’d like to learn about it, visit the Bicentennial Cultural and Convention Center. Originally serving as a hospital in 1899, its grounds now sport a series of huge murals by 20 artists, all depicting moments in the history of Durango. At the entrance are two statues: one of Mexican revolutionary Pancho Villa, and the other of John Wayne! He is their town’s other folk hero, as he filmed many Western classics in a Durango filled with dusty streets and teeming with cowboys, saloons, sheriffs, and dancers.

With close to 1,000 historic buildings in architectural styles ranging from neoclassical to Baroque to Gothic, Durango’s Old Historic District is like a huge open-air museum, earning the distinction of a UNESCO World Heritage Site. The Plaza de Armas at the center leads to the Catedral Basílica de Durango, built from 1685 through 1787 in a blend of architectural styles and with many outstanding features, making it one of the most beautiful landmarks in northern Mexico.

But the highlight of our tour was the Francisco “Pancho” Villa Museum. The museum gives an ample peek into the abandoned child born in Chihuahua, Mexico, who became a mountain bandit and then a revolutionary hero, robbing from the rich to give to the poor. The museum is housed in a magnificent 18th-century building that served as government offices in the mid-19th century.

Pro Tip: If you have the time, ride the Telerifico, a cableway (one of only four in Mexico) that connects two hills at a length of 750 meters and a height of 82. It provides a stunning view of the city’s mountainous terrain.

Want more on Mazatlán and Mexico? Take a look at 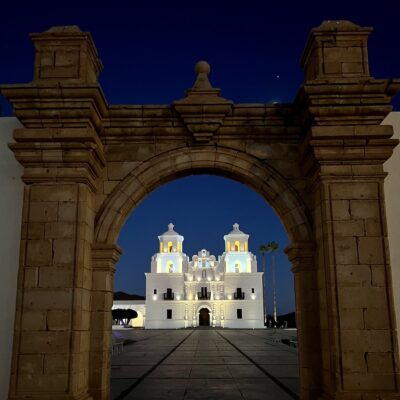