Whether you like home cooking, chef-inspired dishes, or an international flavor, you’ll find it all in New Braunfels. The city, situated between Austin and San Antonio, is home to amazing restaurants creating delicious dishes.

Here’s a look at a baker’s dozen of New Braunfels’ best eateries.

A taste of Germany in Texas Hill Country, Alpine Haus has an unassuming presence. Dining here brought back wonderful memories of the three years I lived in Germany during my Air Force days. Located inside a white house, you’re not sure what to expect. However, each room of the house is set up to provide an intimate setting as diners enjoy traditional German fare. Appetizers include a sausage sampler featuring three German bratwursts and German mustard. Entrees provide a tour of Germany; whether it’s jaeger schnitzel or cordon bleu schnitzel (my favorite), you’ll feel like you’re in the heart of Germany’s Bavaria or Rhine region. The red cabbage is sweet, while the spätzle tastes just like Oma would make. A side of warm sauerkraut adds to the meal. The Alpine Haus special Rinder Rouladen is a thinly cut steak, stuffed with pickle, onion, bacon, and German mustard, and then smothered in the restaurant’s traditional gravy. It’s served with potato dumplings or spätzle and red cabbage.

Talk about some down-home cooking! Pat’s Place offers a great selection of American comfort food. Visitors pack each of its three dining rooms. Pat’s menu features delicious options such as chicken-fried steak, fried chicken, burgers, Mexican food, spaghetti, and even hamburger steak. The chicken-fried steak has a nice breading that accents the steak’s flavor. Add white cream gravy, and you have the makings of a Southern treat my Grandma Carson would have been proud to serve. Appetizers include fried okra, which is a must for me whenever they’re on the menu, as they bring back memories of my Southern grandmother. Celebrating 45 years, Pat’s Place remains a Texas icon with locals as well as visitors.

Pro tip: With a small parking lot, visitors need to be patient. However, there is free street parking available in the neighborhood.

Serving breakfast and lunch from 7 a.m. to 2 p.m., eating at Buttermilk Cafe may fill you up for the rest of the day. With hearty servings, you’ll love the comfort food served here. Good food inspires conversation at the table, which Chef Carol Irwin embraces with her cooking. Offering an upscale twist on food, breakfast options include strata, a crustless quiche baked with egg custard, panini bread, green onion, bacon, tomato, and cheddar cheese. Breakfast tacos feature pork carnitas, queso cheese, and pickled onions. How about house-cured salmon served on a toasted whole wheat bagel, with cream cheese, sunflower sprouts, pickled onion, and capers? The list goes on, including a Creole-inspired shrimp and grits dish. But, breakfast traditionalists need not worry; the menu has plenty of eggs-and-potato dishes including a sirloin steak and eggs dish. Lunch specialties include cornmeal-crusted catfish, meatloaf, and chicken-fried steak, as well as fried chicken livers and smothered calf liver.

Chef-inspired dishes take diners on a culinary road trip of flavors as downtown’s Muck And Fuss Craft Beer and Burger Bar challenges the concept of a hamburger. The Spicy Juicy Lucy (which includes a disclaimer that it has been approved by Matt of Matt’s Bar in Minneapolis, considered home of the original Jucy Lucy) provides a hot reminder that you’re in Texas. Served on a jalapeno cheddar bun layered with pimento cheese, the double burger encases pepper jack cheese and is topped with jalapeno bacon, honey chili sauce, and a jalapeno aioli. Lettuce, tomato, and fried onion strings attempt to lessen the heat. While it’s delicious, the burger will challenge your taste buds and have you thinking about Scoville Heat Units.

How about breakfast for lunch or dinner? The Breakfast Burger includes a fried egg, bacon, tomato, American cheese, house-made hashbrown patty, and a Cajun dill bearnaise sauce. Of course, if you prefer, the All-American is a traditional burger with regular toppings. The restaurant also offers appetizers, such as chips and queso, as well as large salads. Burgers can also be served as salads. Muck And Fuss offers a variety of sandwiches, such as buffalo chicken and North Carolina barbecue pork. Muck And Fuss’s bar includes about 20 choices of craft beer on tap. Diners can also order craft cocktails, as well as “boozy shakes.”

Calling a century-old Post Office building home, McAdoo Seafood Company and Oyster Bar definitely doesn’t mail it in when it comes to great food and service. Renovating the Post Office, built in 1915 by William G. McAdoo, it seems appropriate to have his name on the restaurant’s banner. Creating amazing seafood dishes in Texas Hill Country is no easy feat, but the chef’s staff shines with dishes such as parmesan-crusted trout with lemon dijon caper sauce, grilled tomatoes, and flash-fried spinach. Honey balsamic salmon and Mahi Mahi New Orleans are a couple more impressive dishes featured at McAdoo’s. Cajun lovers will enjoy dishes including crawfish and shrimp etouffee, shrimp and grits, and an amazing crawfish platter.

Rudy’s Country Store and BBQ started out as an old country store in 1900 in the community of Leon Springs. Growing to more than 36 locations across Texas, as well as other locations in five more states, Rudy’s added barbecue to its menu in 1989, and after more than 30 years, the barbecue remains a good choice. Whether it’s a sandwich, ribs, or brisket, Rudy’s offers excellent options. Based on orders of eight ounces, you can order as much meat as you want — maybe consider creating your own platter. With about 12 choices of meat, you can go with traditional barbecue, including pulled pork, or challenge your taste buds with spicy ’cue, such as jalapeno sausage links. Add sides, such as Rudy’s Beans, coleslaw, potato salad, cream corn, or a smoked potato, and you’re set for a full meal. You may need a nap afterward.

An upscale casual restaurant, The Gruene Door creates its dishes from scratch, resulting in amazing tastes and unique offerings. With about 60 varieties of fine wine to pair with meals, diners can enjoy entrees such as shrimp and grits, featuring six lightly-fried Gulf shrimp with a mushroom, tomato, and bacon sauce over cheddar cheese grits. A country-fried duck confit tantalizes taste buds as a leg and thigh are slow roasted and then fried and served with peppercorn cream gravy, garlic mashed potatoes, and seasonal vegetables. Opened in 2009, The Gruene Door remains a favorite with locals as well as visiting foodies.

Union Station Diner owes its legacy to Karl Warnecke, who tore down a bowling alley to build a family home — a transition he completed about 100 years ago. From bowling alley to home to grocery store and now a diner, the diner has lived through a lot of changes over the last century. Today, diners can enjoy breakfast and lunch every day from 7 a.m. to 2:30 p.m. Breakfast includes 55 ways to enjoy an omelet, along with traditional egg dishes, pancakes, and, if you’re really hungry, the Hungry Texan: two eggs, ham, two slices of bacon, two sausages, hash browns or home fries, toast, and two buttermilk pancakes. Lunch includes a Texan burger with grilled onions and sauteed mushrooms, a chili burger served open-faced on a bun and topped with home-cooked chili and cheddar cheese, and a side of fries. Lunch plates include a hamburger steak, meatloaf, and chicken-fried steak.

Whether it’s breakfast — try the jalapeno kolache — to start your day, lunch, or an afternoon treat, Crosswalk Coffeehouse and Café in downtown New Braunfels is best enjoyed by dining at one of its sidewalk tables. You can enjoy the view of the gazebo park, historic courthouse, downtown art, or people watching as you dine on a breakfast taco, a sandwich or wrap, and salad or soup at lunch. Or enjoy one of the several types of available pastries while sipping a delicious cup of coffee, such as the Almond Joy, which tastes just like a liquid version of the candy bar.

The food is upscale, but the prices aren’t. With a seasonal menu that often changes, you’ll want to visit Texas Bistro at Park View often to enjoy all it has to offer. With dishes such as shrimp and grits and a tostada tower that combines smashed black beans, scrambled eggs, pico, pepper jack cheese, roasted jalapeno cream sauce, sour cream, and pickled onions, you’ll understand why it’s imperative to visit often.

Its home is the three-story boiler room of a cotton gin that burned in the early 1920s, and the food rates among the best in Texas Hill Country. Opened in 1977, Gristmill River Restaurant has carved out a reputation as one of the best eateries in New Braunfels. With a menu featuring grilled chicken, pulled pork, and a Gruene club sandwich (with avocado) as well as entrees, such as chicken-fried chicken, fried shrimp, and deep-fried catfish, you’re sure to enjoy some good “down home” Texas dishes. Consider the thick steaks also featured on the menu, and you’ll be challenged by what to order.

Offering a taste of southern Texas cooking, The River House is a great place for families and friends to meet and enjoy a throwback to the days when people gathered for Sunday dinner and shared great food and conversation. Using locally sourced ingredients, the kitchen staff creates outstanding dishes, such as a farm pasta, combining pasta with mushrooms, tomato, peppers, shallots, corn, garlic, and spinach with a lemon cream sauce parmesan. Another dish may take you back to dinner at Grandma’s as you enjoy chicken-fried chicken, served with garlic mashed potatoes, sauteed green bean medley, and a duck fat cream gravy.

No visit to New Braunfels is complete without a stop at Texas’s oldest bakery. Naegelin’s Bakery continues to build on its legacy since opening in 1868, baking delicious pastries, donuts, cookies, and more. It’s difficult to choose just one baked treat when visiting Naegelin’s. From its glazed donuts to strawberry cream-filled treats and coconut donuts as well as the fried pies (apple, peach, and cherry), Naegelin’s is the place to satisfy any sweet tooth. The bakery is also known for its cinnamon rolls, meat-stuffed kolaches, cookies, and fresh bread (almost 20 styles, including German rye and jalapeno cheese). 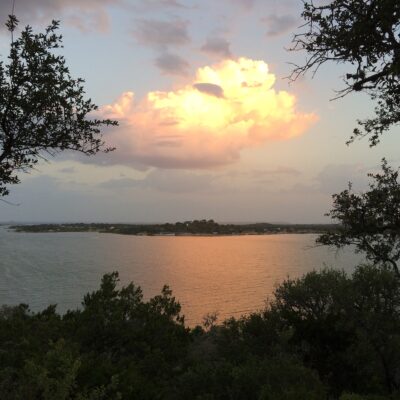 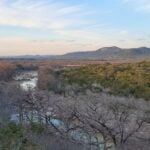 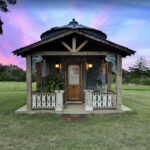 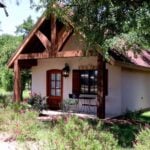