9 Native American Dishes To Add To Your Thanksgiving Table

As we grow older, we embrace more of our past — remembering family celebrations from our youth, traditions that perhaps we set aside for contemporary convenience. For me, it’s learning and practicing more of the traditions and cultures of my tribe. From using its real name, Isanti Dakota instead of Santee Sioux, when I tell someone my history, to including traditions and culture. One thing I’ve done in recent years is to learn more about the foods our ancestors ate on the Plains, and to incorporate them into meals, especially around holidays.

Thanksgiving has always been a difficult holiday for me, and Native Americans in general. Having been raised by a white mother, and then married to white women, the holiday has always been part of my life. While my mom always had dinner, I don’t believe we celebrated it in the sense of others’ takes on it. My wives’ families approached it differently, too. Basically, most Native Americans don’t celebrate Thanksgiving like non-Natives. It’s just another day.

However, families gather. Some people have a Thanksgiving dinner like you see in a Norman Rockwell painting. Others mix traditional Indigenous dishes with the turkey, stuffing, and mashed potatoes.

I thought it’d be interesting to include a few Native American dishes that would complement the American standards this Thanksgiving. With a couple of exceptions, these dishes are based on foods our ancestors would find or grow.

Plains tribes, such as the Lakota and Dakota, would use root vegetables for dishes. Taking advantage of the vegetables they’d find or raise, our grandmothers would clean them, cut them up, and cook them over a fire. Some of the root vegetables included beets, turnips, and squash.

While there are cooks today who will use these vegetables to create their roasted dishes, I favor other root vegetables. I prefer using sweet potato, which was a popular vegetable in Central and South America first, as well as beets and Brussels sprouts. I use a recipe found in the cookbook Sioux Chef’s Indigenous Kitchen by Sean Sherman. The Lakota chef is based in Minneapolis and recently opened Owamni restaurant, which offers traditional Native American fare. His dishes are based on food found in nature or that would have been used before European relationships, so you won’t find sugar, yeast, or any other European-influenced ingredients.

As for the roasted vegetables, cook them in the oven for 40-45 minutes. Meanwhile, create a maple dressing using a teaspoon of sunflower oil and maple vinegar and two tablespoons of maple syrup (add more if you desire). Mix. Then, remove the vegetable pan from the oven and brush the maple dressing over the vegetables to create a sweet glaze. When finished, put the pan back in the oven for about 10 minutes. You’ll want this dish for every holiday going forward.

Stories resonate about the Three Sisters legend and how they came together to work for the common good. However they were in the beginning — bickering, jealous, uncooperative to some and loving and nurturing to others — they eventually became the Three Sisters of corn, beans, and squash. The three crops were planted together because they supported one another’s nutrients and growing season.

Today, they continue to support each other and provide us with valuable nutrient-rich foods, such as succotash. It’s probably the easiest recipe to make — if you do it the traditional way and avoid getting fancy with add-ons. Boil two cups of lima beans and two cups of corn in separate pots until they’re tender. Drain and combine them in a pot. Add half a cup of turkey or vegetable stock and bring to a boil. Serve as a tasty side dish.

My sister-in-law makes the best fried corn I’ve ever tasted. I’ve tried to replicate it to no avail. But, to be fair, she’s cooked it for a long time, and I’m new to trying it. Regardless, I love fried corn.

While kernels picked off a cob (best for crispy fried corn) or cut from it are the best for fried corn, frozen or even canned corn can be used. Though, if you take one of these shortcuts, you’d probably be looked at with scolding eyes from the ancestors.

Coat a large frying pan (cast iron preferred) with butter or lard, then add all the corn. Stir and put on a simmer. While cooking time will vary based on the amount of corn you use, it’s safe to assume 20-30 minutes, stirring often.

You’ll love the taste of fried corn, and it may find its way onto the table more often than just holidays.

Long before Miss Jessica Tandy and Miss Kathy Bates sat down for a plate full of fried green tomatoes, the Cherokee were making the dish as part of their dining routine. A staple in South America, the tomato found its way to the southwest United States long before European settlement of Turtle Island — the name given to North America because it resembles a giant turtle — eventually finding its way eastward to the Cherokee.

It’s an easy recipe — cut four large tomatoes into 1/2-inch slices and set aside. Pour two cups of cornmeal into a pie pan. Heat a cast iron skillet or frying pan and coat with four tablespoons of oil. Blot the tomatoes with a paper towel, and then coat the tomatoes in the cornmeal. Place in the frying pan and cook until both sides are crispy. Remove and serve immediately.

The Pacific Northwest tribes created a simple yet tasty dish to enjoy with meals. Blackberries, salmonberries, and wild strawberries were eaten fresh because they couldn’t be dried like salal berries, which would later be used for preserves or added to cooking.

Today, creating a dish using berries, such as huckleberries, raspberries, blackberries, and strawberries, could be a healthy pre-dinner snack before a smorgasbord of rather heavy and unhealthy dishes, a side dish, or even a dessert option, though, you will want to go Euro-American and add a scoop of whipped topping (I doubt the ancestors would frown at this).

The Santa Clara peoples of New Mexico long considered the Pinyon Pine as one of the oldest trees. The tree grows primarily in the southwest states of Arizona, New Mexico, Utah, and Nevada, though they can thrive as far north as Idaho. The pinon nut offers a delicious treat.

For Thanksgiving, consider roasting the pinon nut with sunflower seeds and pumpkin seeds to provide a seasonal addition to your dining table.

Pumpkins are native to the western hemisphere, so Indigenous people found excellent uses for the fruit. All parts of a pumpkin are edible.

The Ojibwe in the Great Lakes have long used pumpkins in their diet. Whether they’re in Wisconsin or northern Minnesota, you’ll find traditionalists embracing the old ways of incorporating pumpkin into meals.

Baked pumpkins are easy to make. Preheat the oven to 350 degrees Fahrenheit. Take a small pumpkin, place it on a baking sheet, and slide it into the oven. Bake for 90 minutes to 2 hours. Once done, remove it and slice the pumpkin into quarters. Remove the seeds and anything else, leaving the pulp alone.

Then, remove the pulp and put it into a baking dish. In a separate bowl, mix a 1/4 cup each of melted butter, apple cider, and maple syrup. Pour the ingredients over the pumpkin and place it back in the oven, baking it for another 35 minutes before enjoying.

The buffaloberry plant is native to the United States and Canada. The fruit has been used for dye and medicinal purposes. However, it also makes delicious food.

This Thanksgiving, consider making buffaloberry pudding. This simple recipe requires two quarts of buffaloberries (or other berries). Place then in a pot, fill with water, cover the pot, and bring to boil. Add cornmeal as necessary to thicken, along with cold water. Continue stirring occasionally, adding water until the berry mixture is thick. Add honey for more sweetness.

Buffaloberry pudding can be enjoyed by itself or used as a topping over angel food cake or cornbread.

Frybread can be a controversial topic among some Native Americans. It’s not an indigenous food to North America. Frybread came about during early reservation life, as government commodities included flour. So, our grandmothers made the best of a difficult situation. Seeking ways to make enough food to last until the next delivery or feed others in need of a meal, they created the bread.

It developed a life of its own and is now considered a traditional Native American staple. Popular at social gatherings such as community events, ceremonies, and powwows, you’ll often find frybread paired with soup. Indian tacos are definitely a popular food at gatherings, with typical taco ingredients topping the bread. But, it’s good as a side or even with jelly on it. How about topping with buffaloberry pudding?

You can make frybread the traditional way, from flour, water, and other ingredients. Or, you can do it the “cheaty” way, as I like to call it, by using frozen bread or dinner rolls. If you use frozen dough, let it thaw for 5-6 hours.

When the dough is ready, regardless of which you use, let it rise for a couple of hours. Add cooking oil to your pan (cast iron skillet preferred), take a ball of dough, flatten it, and then stretch it at the edges, working all angles. Once you have a hand-sized piece, place it in the hot oil. Cook it for a few minutes on each side. You want a golden crust on each side of the bread. Once done, place the bread on a plate with a paper towel on it to absorb any extra oil.

Serve the frybread with your Thanksgiving dinner as you would dinner rolls or any other bread item. 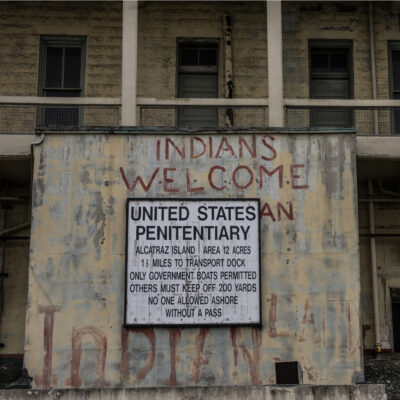 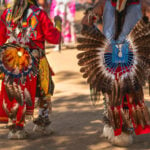 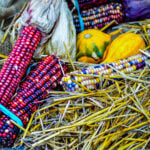