My first glimpse of Amsterdam’s red light district was as a teen on a family vacation. Years before the bossy lady at Google Maps could dictate step-by-step directions to any destination under the sun in real time, my mom was consulting a well-traveled paper map in an attempt to visit the Anne Frank House while my dad navigated the narrow cobblestone streets of Amsterdam.

As Mom buried her nose deeper in the map and Dad’s eyes swept back and forth across the road watching for bicycles and pedestrians, I became acutely aware of our surroundings. Attempting to block my little sister’s view, I stole a long, shocked look at the scantily clad women standing in the windows.

Returning to Amsterdam numerous times since, nearly every travel companion of mine has wanted to walk through the red light district, mostly out of insatiable curiosity and the chance to return home and say “been there, saw that.” And I’m always happy to show them the way to De Wallen because it is a part of Amsterdam’s history and is one of the best examples of the open-minded Dutch culture.

Whether you want to visit the area to satisfy your curiosity, indulge in its legal activities, or bypass it completely, this guide should answer all of your questions about Amsterdam’s red light district.

Pro Tip: From navigating canals to avoid being run over by a bicycle, read up on the nine things to know before your first trip to Amsterdam.

What Is The Red Light District In Amsterdam?

Named for the neon red lights that outline windows and doors where women in lingerie lounge provocatively and flirt with potential customers, the red light district is world renowned for its legal prostitution. Amsterdam has long been known for its open-minded policies toward pot and prostitution. But for the past several years, the largest city in the Netherlands has been trying to attract tourists interested in its many other offerings including picturesque canals, world-class museums, and wheels of cheese the size of tires. And the effort to tamp down on cannabis and sex tourism (AKA “party tourism”) has only intensified with the pandemic.

How Many Red Light Districts Are There In Amsterdam?

Located less than 2 miles south of De Wallen, Ruysdaelkade is often considered to be a more authentic red light district because it’s incorporated into a residential neighborhood and is frequented by locals rather than tourists. Another red light district in Amsterdam is near the intersection of Spuistraat and the Singel Canal. With about 40 windows, it’s also much smaller than De Wallen.

Fun Fact: In Dutch, the red light district is known as De Wallen (the walls) because some of the canals in the area used to be walled. But the term “wall” also used to be a code word for “paid sex.”

When Did The Red Light District Start In Amsterdam?

Dating back to the Middle Ages, prostitution in Amsterdam is as old as the city, beginning when visiting sailors and local widows arrived at a mutual understanding. In the 14th and 15th centuries, only a third of sailors would return home safely. And church laws wouldn’t allow the wives left behind to remarry. That meant that many Dutch women were left without an income, desperately seeking ways to support their families. Foreign sailors docking in Amsterdam would wander the cobblestone streets near the harbor searching for entertainment, and these women were happy to offer companionship for a price.

Prostitution in the Netherlands was officially outlawed in 1570. While the police would occasionally raid the brothels — arresting the women and sentencing them to the spinhuis to spin wool for a bit — not much was done to uphold the law. The Dutch government officially legalized prostitution in 2000, recognizing brothels as legal businesses and allowing prostitutes to register at the chambers of commerce as independent contractors and rent their own window spaces from licensed brothel owners.

What Can You Do In The Red Light District In Amsterdam?

If you want to visit the neighborhood to satisfy your curiosity, a tour may be the best thing for you to do in the red light district. You’ll find a wide range of options including self-guided audio tours, guided walking tours led by a local, and brothel tours led by a prostitute.

Pro Tip: While the terms “coffeeshop” and “coffee house” may conjure images of delicious lattes and smooth jazz outside of the Netherlands, coffeeshops in Amsterdam have nothing to do with a cup of joe. Rather, they are establishments where anyone over the age of 18 can purchase and consume marijuana and hash. From espresso to cold brew, if you want a cup of coffee in Amsterdam, ask for a cafe instead of a coffee shop.

What Not To Do In Amsterdam’s Red Light District

One of the most important rules — and there are signs widely posted to remind you — is to never take photos or film the women in their windows. Although it’s technically not against the law, breaking this etiquette rule can result in security guards demanding that you delete the image or a smashed cell phone with little sympathy or support from the local authorities. It’s also not appropriate to stop and stare at the women in their windows. Not only is it rude to gawk, but “window shopping” in this sense can interfere with their ability to interact with paying customers.

It’s also important that you do not purchase drugs from a street dealer. The coffeeshops throughout Amsterdam are licensed businesses where it’s perfectly legal to consume marijuana or hash. But it is illegal to purchase these items (or other offerings) from a street peddler or consume any drugs out on the streets.

Lastly, don’t be a pig. Just like you shouldn’t anywhere else in the world, don’t throw trash on the street or in the canals. Don’t consume alcohol in the street, be drunk or stoned in public, or otherwise disturb the peace. And absolutely do not urinate in public, especially when there are “sexy loo” public toilets available with video screens designed to fit in among the red, neon-lit window brothels!

Compared to other prostitution areas around the world, Amsterdam’s red light district is one of the safest. Not only do police officers regularly patrol the streets, but many of the prostitutes employ private bodyguards, and the area is further monitored by cameras. That said, the red light district is still a busy area in a large city, so you’ll want to watch for pickpockets and otherwise be mindful of your surroundings.

When Is The Best Time To Visit The Red Light District?

Not surprisingly, De Wallen really comes to life as the sun goes down. If you want to avoid the crowds, opt for a self-guided or guided tour between 7 p.m. and 9 p.m., especially from Sunday–Thursday. Things really start to pick up around 10 p.m. — especially on Friday and Saturday nights — and slow down between 2 a.m. and 3 a.m. as the neighborhood businesses start to close.

How Do I Avoid The Red Light District In Amsterdam?

Even if you’re not interested in lighting up a joint, consuming an edible, or stepping inside a window brothel, you’ll likely want to venture close to Amsterdam’s red light district. Why? Because De Wallen is situated in one of the oldest areas of the city. Nearby you’ll find the beautiful Oude Kerk (old church), the Anne Frank House, and picturesque canals flanked by cobblestone streets and tall, narrow brick houses.

But if you’d rather not walk past peep shows or answer questions from fellow travelers about the scantily clad women standing in the windows (like when I visited Amsterdam with my school-aged son), it’s easy to explore Amsterdam’s city center without wandering through the red light district. Just avoid De Wallen when plotting your course via a paper or electronic map, and you should be all set.

Interested in the Netherlands? Check out our coverage of the Dutch country: 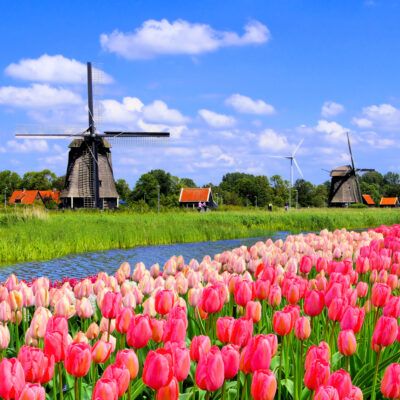 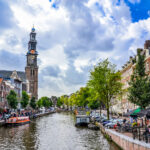 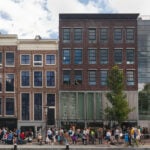 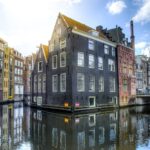 Amsterdam5 Reasons Amsterdam Should Be On Your Bucket List