7 Fantastic Breweries To Visit Along The Beer City Ale Trail

Start your Ale Trail Adventure with the Beer City Ale Trail Map and create a plan to explore the city’s more than 40 craft breweries. I had a particular interest in repurposed buildings with an impressive former life, so many of the breweries I chose were once firehouses, furniture stores, and funeral homes.

Grand Rapids features the Brewsader Passport in App form, where visiting eight breweries and collecting their electronic stamps can earn you a free T-shirt. Here are seven of the breweries I explored on my way to achieving my free T-shirt.

Located on the west side of Grand Rapids, Mitten Brewing Company sports a vintage baseball theme in a Victorian-era firehouse, the former Engine House Number 9. While the building was once a fire station, the brewery’s theme is baseball. The baseball theme starts with the blue stadium-style seats from the old Detroit Tiger Stadium, used in the lobby. The Detroit Tigers “D” logo adorns one of the exposed brick walls. Baseball bats are made of ash wood, and the theme persists with the brewery tabletops also made of ash wood. If the Detroit Tigers have a game, all televisions are tuned in. It’s the place to watch baseball.

With playful baseball references on the menu, you find the field of greens, the curse of the goat, Thai Cobb, Westerdog, the grand salami, and the plate setter.

Pro Tip: While the brewery doesn’t take reservations, you can reduce your wait time by getting on its online waitlist.

Situated in the East Hills neighborhood of Grand Rapids, Brewery Vivant is the first LEED-certified microbrewery globally. The brewery makes European-inspired beers with an emphasis on French and Belgian-style beer.

Combine those rustic beers with the locally sourced ingredients used in its scratch-made kitchen. Add a setting that was once a funeral chapel complete with a choir loft and stained-glass window, and you have a unique atmosphere for a brewery.

At Brewery Vivant, you’ll find some Belgian dishes on the menu, like escargots and Pommes Frites that pair well with the beer. I particularly enjoy menu items that use the brewery’s beer when I eat in a brewery. For example, as a spread, the beer cheese is a four-cheese blend, Farmhand Rapid IPA, some herbs served with rotating types of bread. You’ll also find this topping the smoked turkey burger.

One of my favorite beer choices is the Tourist in Bruges: a Belgian pale ale brewed with a Belgian yeast strain that has fruit characteristics. The beer is a combination of German Select, Huell melon, and some Loral hops. It has a bit of floral character with aromas of spice, melon, and light strawberry.

Another is the Pomelemade, Fruited Saison, which is a twist on the Monaco, a classic French beer cocktail. It’s a lager mixed with pomegranate syrup and lemonade. The Brewery reconstructed that refreshing drink in its Saisons. It’s refreshing and a little bit tart.

Pro Tip: The Brewery Vivant patio is not pet-friendly.

Located in downtown Grand Rapids, Founders Brewing Company is known worldwide and is rated as one of the world’s best breweries. But it wasn’t always that way. Initially, the brewery struggled. Then, it sold its filter, and its beer took off from there. Today, the beer is rated number two in the world. Eight of the brewery’s beers have won at least 13 medals.

One of the must-try dishes is the Glutton sandwich. It’s made from in-house bourbon barrel-smoked pulled pork, thick-cut bacon, crispy onions, beer cheese dip, and Dirty Bastard BBQ sauce on a toasted “everything” roll. What’s great about this sandwich is the way beer is incorporated into the dish. You’ll find its beer in the beer cheese dip, the barbecue sauce, and the pulled pork smoked in a bourbon barrel, making for a tasty treat. In addition to great food and beer, Founders Brewing Company offers live music from nationally known talent.

It offers public brewery tours and classes so you can learn more about the beer you love. It naturally brews its All Day IPA from a complex variety of grains, malts, and hops balanced for optimum aromatics. It’s the perfect beer after a long day at work.

The Knickerbocker: New Holland Brewing is a 40,000-square-foot venue that has a lot going on, with a restaurant that includes an onsite butchery, brewery, and distillery. Even with the onsite butcher, you’ll still find meatless and vegan options on the menu.

My favorite sandwich was the Cuban, with Michigan pork shoulder roasted to perfection, ham, Swiss cheese, dill pickles, served on a Telera bun spread with mustard. The bun is like a French roll, slightly sweet with a hint of sourdough, the same bread that it builds Mexican tortas on.

The restaurant’s interior offers barrel-crafted décor, where you’ll find the larger-than-life dragon, an impressive piece of art. In addition, the space has a beautiful open-air courtyard where you can eat al fresco when weather permits, which also includes a stage for live music.

Its signature beer is the Dragon’s Milk, a bourbon barrel-aged stout, and it also features a limited-edition reserve version of the Dragon’s Milk. Through the years, it highlighted over 20 versions of the Dragon’s Milk Reserve. Unfortunately, the limited edition might only be around for a couple of months, and then a new one appears as the old one runs out. Of course, there’s always something new, but it’s disappointing when your favorite is gone from the menu.

Pro Tip: It has a store onsite where you can purchase beer for takeout.

While its food includes some American comfort foods like a meatloaf dinner and chicken pot pie, what’s different is its menu items that give the nod to the United Kingdom — England, Scotland, and Ireland. So, you’ll find bangers and mash, the ploughman’s platter, and Scotch eggs.

One of my favorite beers at Brass Ring Brewing is the Eight Pound Hammer, an Irish stout, chocolatey, coffee, and malty. It’s thick but not heavy and lightly hopped. It’s exactly what I like in a stout.

Pro Tip: You can enjoy the Ale Trail without driving. In addition to an award-winning bus system, several beer tour companies provide options. Along with rideshare options, Grand Rapids has several safe ways to imbibe.

Located in a strip mall off Southeast 28th Street, Thornapple Brewing brings craft beer, cider, spirits, and wine created by the internationally awarded co-owners. The appetizer bites I like made from their beer are the warm pretzel with beer cheese and honey mustard dipping sauce and the beer-battered cheese curds with marinara sauce. The brewery is also known for its gourmet pizza.

In addition to its signature pizzas, it features a variety of no meatza pizza, its take on vegetarian options. It offers a tasty vegan option with vegan red sauce, marinated tomatoes, artichokes, spinach, vegan cheese, and fresh basil.

One of my favorites from the beer menu is the West Coast IPA with Citra, and Michigan-grown Chinook hops. These Michigan hops usually have notes of pine and resin and are fruitier with a pineapple note. The beer is a clear IPA that has tropical and citrus notes.

Pro Tip: Before going, check to see if it’s only doing pickup orders or is back to in-brewery dining.

In the Creston neighborhood, at the corner of Plainfield Avenue and Quimby Street, Creston Brewery brews in a 1920s building, once a DeKorne furniture showroom. With large windows that once exhibited furniture, it now makes the brewery light and airy. Before being Beer City USA, Grand Rapids was Furniture City, USA.

Starters that pair well with the beer are the hush puppies with Creole remoulade sauce and the everything bagel spice chip dip. While you’ll find hamburgers, fish, and chips on the menu as standard fare, a more unusual item is the Kung Pao pork wings, which have been popular recently due to the shortage of chicken wings.

Quimby, an oatmeal brown porter, is a medium-bodied dark brown ale brewed with chocolate and roasted malts, oats, and Michigan hops. The Quimby is one of my favorites. Other local favorites include the Bokonon New England IPA and GRale.

Pro Tip: Creston Brewery recently reopened under new ownership after being closed during the pandemic. You’ll now find some of your favorite Saugatuck Brewing Company favorites on the menu, in addition to your old favorites from the original Creston Brewery.

Michigan boasts not only beer but other food and drink options: 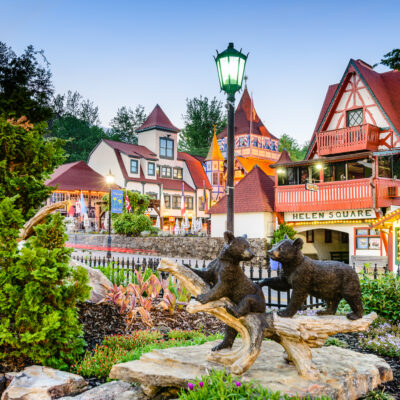 Beer8 Excellent Oktoberfests Across The U.S. 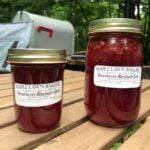