9 Most Haunted Places To Visit In The Midwest

As a kid, I loved haunted houses and scary movies. Growing up in small towns, we knew which house was haunted and where the town’s “witch” lived. As I grew older, I realized that a “witch” was usually a misunderstood person. Of course, getting older didn’t deter me from haunted houses, but I also moved on to scary movies. I recall watching the original Halloween movie with Jamie Lee Curtis three times in its first week out. Poltergeist, Alien. Any scary movie intrigued me.

As for haunted houses, we had people who would create them in their garages or an empty building. At first, they offered a challenge, but then I outgrew them. Or so I thought. Having children and then living in Omaha, haunted houses during Halloween provided a fun way to get scared. I’ve even visited a few as an empty nester.

Today, however, I find it interesting to visit actual purportedly haunted places. Despite being a little scared to know there may be a spirit in my hotel room or even standing next to me, I find it invigorating to know that we’re able to transcend planes.

Whether or not you believe in ghosts, communities around the Midwest have created opportunities for people to visit haunted places. Here are a few of my favorite places, via personal visits and hosted trips (all views are mine) to “get your Halloween scare on.”

Considered the most haunted house in America, the Sallie House is a truly scary place to visit. Several paranormal investigators have visited the Sallie House, and international television programs have filmed there. Self-guided tours are available in the house where a small girl died during surgery. It’s believed the girl haunts the house because she woke up during the operation and the last thing she saw was the doctor’s face, whom she thought was torturing her. She allegedly doesn’t like men and may haunt them. A family moved in a couple of decades ago, but didn’t stay long, as their dog started barking at empty spaces, objects moved on their own, and the man reported scratches and cuts mysteriously appearing on his body. If you’re interested, overnight stays can be reserved. It’s said you may want to reserve a room at the nearby Holiday Inn Express, just in case.

Despite dying in New York, the widow of Colonel George Armstrong Custer is believed to haunt the Custer House at Fort Abraham Lincoln State Park. When Custer bid adieu in June 1876, his wife, Elizabeth, didn’t realize it would be the last time she’d see her husband of 12 years. Though she had an eerie feeling as dense fog enveloped Fort Abraham Lincoln, the Seventh Cavalry headed out for Little Bighorn in Montana. The soldiers met their fate, as Custer led them to the biggest defeat for the military during the Indian Wars. Mrs. Custer remained at the family home at the fort until returning to the east coast. She died in New York in 1933, at the age of 90. People have said they’ve seen her apparition at the house in North Dakota. Wearing a mourning gown, she is believed to roam around the property. If you prefer to avoid a sighting of Mrs. Custer, I recommend taking a day tour of the house, which is actually the third version of the house built on the site.

Located in the heart of downtown Milwaukee, the Pfister Hotel offers a luxury hotel experience, as well as some unexpected guests. Considered the most haunted location in Wisconsin, the Pfister Hotel is known for things going bump in the night. From objects moving to ghosts appearing in rooms, the Pfister is the place to visit if you don’t feel the need to call the Ghostbusters. Major League Baseball players, whose teams often stay at the luxury hotel when they play the Brewers, report seeing and hearing things out of the ordinary. One player claimed an apparition hovered above his bed as he tried to sleep. While you can reserve your own room at the Pfister, perhaps a tour — guided or self-guided — would be better. The views of the city and Lake Michigan are impressive from the top floors of the Pfister Hotel.

Known as the “Bloodiest 40 acres” in the country, tours of Missouri State Prison touch on the haunted feel of the former penitentiary. Among the former infamous inmates are James Earl Ray, Charles “Pretty Boy” Floyd, and Emma Goldman. With more than 40 inmates executed at the prison and others killed under suspicious circumstances, there’s sure to be a ghost or two roaming the cell blocks. The prison offers two ghost tours — two- and three hours long. The first tour offers a guided visit through the prison including one of the oldest units (built in 1868), dungeon cells, and the gas chamber. You never know what may lurk in the bowels of the prison. People are encouraged to bring their own ghost-finding devices, such as an EMF app, for the three-hour guided tour. Guides will review what to look for as you traverse the cell blocks and prison grounds, including opportunities to search on your own. The prison also offers a three-hour ghost hunting course. If you prefer a safer experience, consider reserving a spot during the day tours.

During the early hours of June 10, 1912, at least one person sneaked into the home of Joe and Sarah Moore, savagely beating them and six children ages 5-12. When done, eight people were murdered in what is likely Iowa’s oldest and most horrible cold case. Today, the Villisca Axe Murder House offers day and overnight tours. The daylight tours, 1-3:30 p.m., are likely the safest time to visit. Though, people have reported hearing children’s voices and seeing objects moving by themselves. The overnight tour is a sleepover if you feel brave enough.

Kansas is considered one of the most haunted states in the country, so it makes sense that there are several communities claiming to be visited by spirits. Built as an addition to the Delmonico Hotel, the Historic Wolf Hotel serves as an Airbnb (five vintage rooms and suites) and events center today. Guests can explore the hotel anytime, including the underground tunnel stores and saloon (open as a speakeasy Friday-Saturday). Other people can reserve an underground tunnel tour. Known to be haunted, guests have reported apparitions in their room or in the tunnel. A young girl is believed to roam the tunnel and may be seen in the general store. Bring an EMF app if you want to perform your own paranormal investigation.

The Museum of Shadows — named the most haunted museum in the world — offers a look into the world of possession through the eyes of discarded dolls, toys, and other items. With more than 3,000 artifacts believed possessed, the museum’s paranormal investigators and owners spend hours researching to confirm each item’s story. As people tour the museum’s two floors, they may find dolls and other toys watching them as they stroll by. Some people have reported being touched by unseen forces or encountering apparitions. Originally located in Plattsmouth, in another haunted building, the owners sought out the right building when they moved the Museum of Shadows to Omaha’s Old Market district.

Most people wouldn’t think of walking through a cemetery at night, for fear of seeing something or someone walking across the grounds. At Mount Mora Cemetery, historic mausoleums line a paved path, offering a look into the area’s history. Each October, a ghostly tour — Voices of the Past — “brings” back a figure from the cemetery to discuss life in early St. Joseph. But, you can also take a self-guided tour and learn about St. Joe through the eyes of its earliest residents.

Atchison claims to be the most haunted city in Kansas and believable based on sightings and stories. Built as a home for local businessman John McInteer and his wife, the brick-clad home has long been the epicenter for paranormal experiences. The 1889 McInteer Villa was the site of a personal spiritual connection for me. During a tour, the host’s EMF app said my name. During the conversation, it appeared my eldest brother reached out to contact me. No reason was given, as the conversation was cut short. This type of interaction is common at the McInteer Villa, where doors close on their own, and lights mysteriously flicker on and off. Overnight stays are offered, in addition to day tours. Since the interior has security cameras, paranormal activity can be viewed with the owner.

Pro tip: Whether you’re a believer in the supernatural, a fan of ghost tales, or someone who just enjoys a fun adventure, the Midwest is home to several ghostly attractions, which are sure to offer an out-of-this-world experience. Download your favorite electromagnetic field (EMF) detector app and see what happens.

Check out these unusually haunting places: 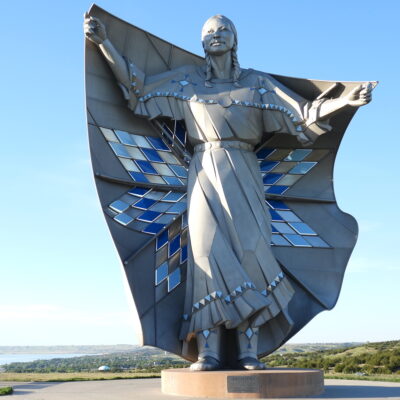 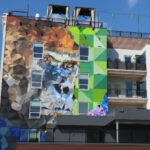 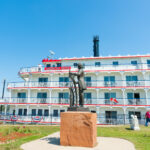 Midwest9 Most Scenic Boat Rides In The Midwest