Beginning October 1, Walt Disney World is embarking on an 18-month 50th anniversary celebration. To ring in its 50th jubilee, Disney World will be introducing new attractions, new merchandise, and brand new looks for the parks and their characters.

From all new “EARidescent” designs throughout the park to a new Ratatouille adventure, you’re going to want to be right next to your favorite Disney characters during the 50th anniversary. Along with brand new merchandise that will take you back in time to the park’s 1971 opening, Disney World is preparing all four of its parks for the 50th anniversary extravaganza.

Here are some of the new looks and activities that will be featured throughout Walt Disney World starting October 1.

When it comes to theatrical celebrations, Disney World is no stranger to spicing up its parks and adding new attractions for the excitement of its guests. Two things to look out for during Disney’s anniversary celebrations are Magic Kingdom’s Disney Fab 50 Character Collection and Disney Enchantment throughout Magic Kingdom’s Main Street.

The Fab 50 Collection features brand new gilded statues of some of the most beloved Disney characters spread all around Magic Kingdom.

“Our ‘Disney Fab 50’ sculptures pay homage to the past 50 years of Walt Disney World while ushering us into the next 50 years and beyond,” Cayla Ward, Disney’s associate manager of synergy and partnership marketing, wrote for Disney Parks Blog. “These sculptures will further immerse [guests] into a world of fantasy and tomorrow, where laughter, joy, and that intangible pixie dust will bring a lifetime of memories.”

“Since opening day in 1971, dazzling fireworks shows have provided that perfect exclamation point at the end of a fantastic day at Magic Kingdom Park,” said Mark Renfrow, Show Director for Disney Live Entertainment.

Several times throughout your day at Disney’s Animal Kingdom, you’ll be “joined by a team of performers bringing with them a colorful collection of oversized props and kites adorned with Disney animal friends,” wrote Slater.

Disney’s KiteTails will include some of your favorite Animal Kingdom characters, like Simba, Zazu, and King Louie floating above as three-dimensional kites.

Aside from the never-before-seen looks that the park is striving for during its 50th anniversary celebration, EPCOT is introducing its newest attraction, Remy’s Ratatouille Adventure.

Shrink down to the size of Disney’s favorite rat and adventure “Ratatouille’s Paris” on this 4D experience. This immersive ride puts guests into Remy’s shoes and takes them through some of the most notable scenes and locations from the Oscar-winning animated film.

A chance to ride Remy’s Ratatouille Adventure can only be reserved via virtual queue. All information about Disney’s virtual line system can be found on Disney World’s “Know Before You Go” page.

The Ratatouille Adventure is the latest addition to EPCOT’s newly expanded France Pavilion. After the ride, folks can enjoy a crepe and hard French cider at the brand new La Crêperie de Paris, France Pavilion’s newest restaurant — all set to open on October 1.

After you get a chance to explore the expanded Pavilion and be one of Ratatouille Adventure’s first riders, end the day viewing EPCOT’s brand new “Harmonious” spectacular.

This brand new immersive experience will feature some of your favorite Disney characters and music in several different languages, all adding to EPCOT’s unique international flair.

The show will be held at EPCOT’s World Showcase Lagoon starting October 1, and showtimes can be found within the My Disney Experience App.

For its 50th anniversary, the park is adding some new nighttime looks called “Beacons of Magic” that can be experienced at all four parks.

The displays will feature “EARidescent” lights, enchanting fireflies, sparkling pixie dust, and more during your nighttime adventures at Walt Disney World. Inviting all of the parks’ guests to celebrate, “Beacons of Magic” will be displayed on the four main icons at each of Disney’s four parks: Cinderella Castle at Magic Kingdom, Spaceship Earth at EPCOT, The Tree of Life at Animal Kingdom, and The Hollywood Tower Hotel at Disney’s Hollywood Studios.

Be one of the first to see these “Beacons of Magic” starting October 1.

Tickets can be purchased through Cirque du Soleil here.

The Celebration, Disney Castle, and Vault collections will all be available October 1, with the EARidescent and Luxe Logo collections set to release in late October and November.

The collections will touch on some of the most beloved aspects of Disney’s parks, movies, and history. According to the park’s website, collections will feature commemorative items, castle-inspired attire, retro-themed treasures, and much more.

Walt Disney World’s 50th anniversary is set to truly be “The World’s Most Magical Celebration,” providing guests with more than enough new attractions and adventures to take part in.

For more information regarding Disney’s 50th anniversary, check out our recent coverage: 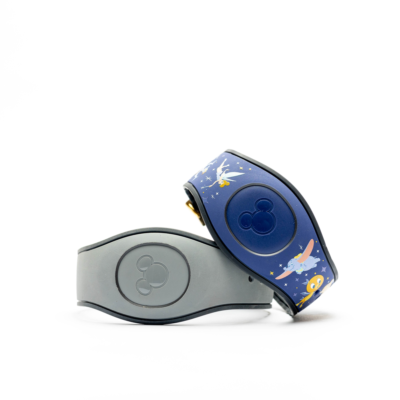