How To Spend A Perfect Day In Charming Corsicana, Texas

At first glance, Corsicana appears to be a sleepy small town that looks a lot like many other Texas towns that developed between the late 1800s and the 1920s. The wealth produced by cotton and the oil boom, both of which occurred over 100 years ago, provided the resources for the development of the historic district. But, look a little closer… those old buildings are being restored. The deep sidewalks invite you to wander down the street and peek into the windows of the shops, restaurants, and entertainment venues.

What Does The Island Of Corsica Have To Do With Anything?

Corsicana was founded in 1848 as the location for the seat of newly formed Navarro County. Jose Antonio Navarro, a Texas patriot and signer of the Texas Declaration of Independence named the city Corsicana after the island of Corsica, the home of his father.

By the 1870s, Corsicana was a railhead and agricultural town. Cotton was king, and the town thrived. Residents began building fine homes in the area now known as the Carriage District. By 1894, Corsicana experienced the first oil boom, making it the first town west of the Mississippi to discover oil.

Stop by the visitors office to obtain a map of homes to tour in the Carriage District. The tour focuses on homes built between 1846 and 1900, though there are many others built later, especially after the second oil boom.

Pro Tip: You may want to begin this tour at the Navarro County courthouse, located at 300 W. 3rd Ave. It is one of only two surviving courthouses built in Texas by noted architect James Edward Flanders.

Today, the boom in Corsicana is an artistic one. Filmmakers have taken note. Netflix has produced a docu-series called Cheer, all about the Navarro County national champion cheerleader squad. From one of the wealthiest oil towns in Texas to a town known primarily for fruitcakes, Corsicana is being transformed into a destination for arts and culture. All this is due in large part to one man.

The Beginning Of 100 West

In 2015, Dallas artist and furniture maker Kyle Hobratschk took a chance and purchased the former Odd Fellows Lodge in Corsicana. He has made it his mission to turn the 1890s-era lodge into a home for the Corsicana Artist and Writer Residency appropriately named 100 West, the address of the lodge.

100 West provides an expansive space for artists in residence, with ample light and texture to inspire and create. To date, the residency has hosted over 100 artists and writers from all over the world.

The Storefront, an auxiliary building, provides a beautiful gallery-like space for visitors to experience the art and literature produced by artists of the residency program.

More than 25 books written by local writers and graduates of the residency program are available for sale. The Storefront also hosts events and community gatherings.

The best part is that you don’t have to be a budding Shakespeare or Georgia O’Keefe to take part in the creative workshops. I recommend you check the calendar and plan a trip to Corsicana around one of these events. I took a memoir writing workshop one Saturday afternoon and would happily drive back for more events. Bonus: your dollars help fund 100 West.

Last month, the Storefront hosted author David Searcy, whose work has been featured in The Paris Review and Best American Essays 2013. Searcy divides his time between Corsicana and Dallas.

Speaking of Texas personalities, Corsicana has seen a few. Lynam T. Davis, the founder of Wolf Brand Chili, got his start here in 1895. Davis would peddle his chili from a cart on the street, selling it for .5 cents per bowl.

August Weidmann, a German immigrant from Wiesbaden, founded the Collins Street Bakery and created the original deluxe fruitcake recipe. The bakery is family-owned to this day and has two Corsicana locations, as well as several others throughout Texas. If you’re sure you don’t like fruitcake, try this —it just might change your mind.

Country music legend Lefty Frizzell claimed Corsicana as his hometown. Lefty had a distinct style of singing that became a huge influence on country music. Even if you’ve never heard of Lefty Frizzell, you’ve probably heard his most memorable song, “If you’ve got the money honey, I’ve got the time.”

Both Mobile and Texaco Oil companies got their start in Corsicana, too. While not big personalities, they are certainly big corporations!

To learn more about other Corsicana natives who have shaped the history of the town, take the Bronze Sculpture Tour. As you walk the downtown area, be on the lookout for the life-size bronze statues of Corsicana natives who have played an important role in the history and development of the city. Visitors can pick up a map and link to an audio tour at the visitors center, always a good place to start, or scan a QR code found on each sculpture.

Corsicana has a plethora of street art, and all of it would look great on Instagram. Behind the Palace Theater, you will find a colorful alley dedicated to street art. Future plans for the alley are to add theatrical lighting, leveling the pavement to make it more accessible, and of course, there are more murals planned for the future.

The alley isn’t the only place in town to find outstanding street art, though. Have your camera ready for the gorgeous mural dedicated to the history of Corsicana, located on 5th Street at Beaton. Standing on 5th Street, look across at the beautifully restored Dr. Pepper ghost mural. Next to the mural is a sculpture and plaque honoring Lynam T. Davis who was only 12 years old when he began selling Wolf Brand Chili on the street corner.

The Palace Theater first opened its doors 100 years ago as a vaudeville theater, then transitioned to a movie house in the 1930s. Throughout its history, the Palace Theater has featured name acts like Marvin Hamlisch, Clint Black, Aaron Neville, and Herman’s Hermits.

Slated for demolition in the 1990s, the Palace was saved and beautifully restored. The 545-seat theater now hosts live acts year round. In this intimate environment, there is not a bad seat in the house.

Pro Tip: if you’d like to attend one of the many sold out shows, you will need to book in advance. Upcoming performances include Asleep At The Wheel, Crystal Gale, and Tapestry, The Carole King Songbook.

Shopping in Corsicana seems to focus primarily on home decor and antiques, vintage and new clothes, shoes, and accessories. Another thing I noticed: Corsicana business owners really know how to create an inviting exterior to lure you in.

A few of my favorite shops and storefronts include the Victorian Sample Florist, housed in a gorgeous, two-story red brick building –– the owner has created a lovely spot for photos or to sit and relax among the greenery.

The Grave Creek Mercantile slogan is quite apt: “Everything old is new again.” Take a step inside and rediscover your childhood.

My olfactory memories were triggered by a walk through Merle Norman Cosmetics. When I was a kid, my mother worked for Merle Norman and I was a frequent visitor. Today, Merle Norman sells not only cosmetics but a lot of gift items. Check it out for something ultra feminine.

Canterbury Court Antiques is owned and run by a former lawyer who was inspired after spending some time at school in London. He makes a couple of trips a year to the UK and Europe to stock up on English and French antiques.

Emporium 1905 is an eclectic vintage shop focusing on clothes and hats, though you’ll also find decor, jewelry, and shoes. The building dates back to… you guessed it, 1905, and was the first place that Wolf Brand Chili was sold in a can.

The Turquoise Pistol is a boutique that focuses solely on modern women’s clothing, shoes, and accessories. It also does a brisk Instagram business.

Another favorite shop is Timbers, an eclectic coffee house, boutique, and decor shop. There is seating both inside and out, and the attached boutique has a pretty, boho vibe. This is a great place to take a break and enjoy a coffee or a sandwich and do a little shopping. Timbers is a few blocks away from the Turquoise Pistol on W. Collins Street.

Places To Discover Outside Of Downtown

Corsicana has a lot more going on than meets the eye. If your day allows, you’ll want to visit these excellent museums just a little outside the historic district.

The Pearce Civil War and Western Art Museum states that its mission is: “to bring to life the American Civil War and the American West through collections, preservation, exhibition, and interpretation.” Through interactive video, diaries, and artifacts, plus over 235 works of western art, the museum endeavors to fulfill this mission.

Located on the Navarro College campus, the museum archives consist of more than 15,000 original documents. The museum archives and reading room are available by appointment only, but anyone can visit the permanent exhibits during regular hours of operation.

Country music legend Lefty Frizzell, whose style influenced many who followed him, including Willie Nelson, is memorialized at the Pioneer Village in Corsicana. Lefty’s clothes, boots, photographs, furniture, and more can be found here, along with memorabilia from many other Texas-born country musicians.

Corsicana makes a great day trip from Dallas and a good stop for road trippers heading north from Austin or Houston.

Pro Tip: Downtown closes early, and many stores and restaurants are only open on the weekends. Most shops are closed on Sunday and close early on Saturday. Be sure to check websites or with the local chamber for hours of operation.

Many Texas towns have an interesting history and deserve to be explored: 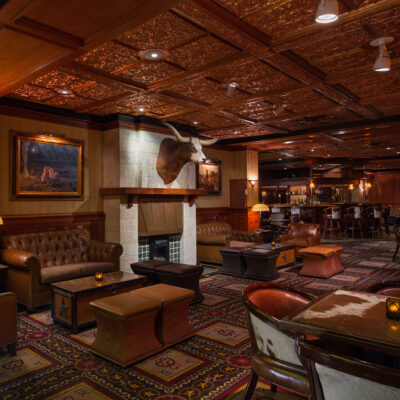 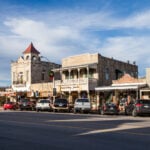 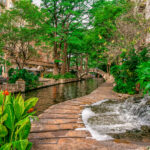