8 Reasons Retirees Are Falling In Love With Vietnam

My first visit to Vietnam last year was nothing short of magical. From the moment my husband and I landed at the airport in Ho Chi Minh City, I was entranced by the energy of the sultry urban center — from the late-night food stalls and bustling open-air bars to the hundreds of motorbikes stopped at every red light, requiring great courage and a speedy gait to cross the streets in constant traffic.

Later, in coastal Hoi An, I marveled at the well-preserved Ancient Town with its centuries-old buildings, a UNESCO World Heritage Site. We ordered savory and unusual foods from the Night Market stands by pointing at photo menus; toured the countryside by bicycle, learning about the ever-present rice paddies and how rice paper is made; and taxied to a white-sand beach for a dip in the South China Sea when the humid, hot climate overwhelmed our Colorado senses.

Alas, with less than a week in this colorful country, our trip was way too short. Before leaving Vietnam, I vowed to return someday, and I recall saying to my husband, “I could spend a lot of time here.”

Apparently, I’m not alone. With its rich culture, tropical weather, low standard of living, and vast sightseeing opportunities and travel in Southeast Asia, Vietnam is a popular place for expats to relocate. It’s also caught the attention of retirees. In fact, Vietnam ranked number 10 on International Living’s list of the world’s best places to retire in 2021.

Here’s a closer look at why folks are considering spending their retirement years in Vietnam.

International Living points out that Vietnam’s “exceptionally low cost of living” is a huge draw. In A Better Life for Half the Price, author Tim Leffel notes that Vietnam is “one of the best values in the world for travelers, especially when it comes to lodging and food,” making it a great value for residents, too. Leffel says that when it comes to apartments, almost anywhere in the country, “you can find something nice and reasonably roomy in the range of $300 to $800 a month.”

Indeed, Neil Varden, the CEO of CabinZero, moved to Ho Chi Minh City (HCMC or commonly still referred to as Saigon) from the United Kingdom three years ago, reports, “The cost of living is great. I can live like a king without spending much money, to be honest.”

Low prices certainly made sightseeing, shopping, eating, and drinking in Vietnam so wonderfully appealing when I visited. Dipping into a busy, casual restaurant and paying $1 for an ice-cold can of beer and $2 for banh mi, the country’s divine, ubiquitous pork sandwich on a baguette, ranks among one of my all-time favorite meals — ever. Which brings me to…

Once Vietnam is your home base, the whole of Southeast Asia is easy to access. With plentiful flights on budget airlines, frequent trips to Thailand, Cambodia, Laos, or Malaysia are possible.

And traveling within the country is pretty simple, too, with flights between key cities like HCMC, Da Nang, and Hanoi, plus a system of buses, trains, and even ferries to popular island destinations, like Phu Quoc.

Not only is Vietnamese food so darn cheap throughout the country — whether you’re picking something up from a street stall, sitting down in a restaurant, or shopping at a local grocery store — it is so darn good.

On my trip to Vietnam, we indulged in all of Hoi An’s signature dishes, from the banh mi sandwich, to white rose dumplings, to cao lau noodles. We sampled other key foods, including pho, spring rolls, and “Vietnamese pizza” — meat, egg, and veggies on rice paper, folded to eat on the go.

Strong, dark Vietnamese coffee is exquisite (though I never did try it topped with egg yolk whipped with condensed milk), and I couldn’t get enough of the incredible baguettes and crusty rolls served at breakfast buffets, a welcome leftover from the country’s French colonial days.

Bottom line: If you’re a foodie who’s interested in sampling new foods and enjoying them cheaply, Vietnam will not disappoint.

I concur with expat Neil Varden who notes that the Vietnamese are “very friendly.” Indeed, everywhere we went, we encountered so many smiling faces — people who were eager to help us.

I found it especially true at our Hoi An hotel, where gentle demeanors and a welcoming nature were the norm among the front desk and restaurant staff. Our English-speaking bike tour guide was chock full of knowledge and so accommodating — candid and happy to answer questions about her life in Vietnam.

Australian Phil Minett arrived in Vietnam for a “short” stay in March 2020, intending to see if it might be a place he’d like to relocate permanently (he’d visited several times prior). Then the borders shut down due to the pandemic, and he’s still in the country a year later. While living in a “very local” 10-story building in HCMC, during which time he said he saw only one another Westerner in his three months there, Minett said he encountered generosity and friendliness among his neighbors several times over.

In particular, when an old injury flared up, a few neighbors noticed Minett was limping. A handful of women turned up at his door with a wheelchair “they found somewhere in the building” and called a car to take him to get medical care (“I had no say in the matter,” says Minett), with some accompanying him to the hospital and getting him food.

On Minett’s return late that night, the neighbor women were waiting for him, having arranged for the apartment elevator to stay on at midnight when it normally stops running at 11 p.m. Says Minett, “Perhaps this helps explain why I love it here so much.”

Da Nang seems to be the “it” place for expats and digital nomads these days, with its numerous cafes (with solid internet), golden beaches, high-rise apartments, and pretty landscapes, as it’s surrounded on three sides by mountains.

To the south of Da Nang are two world-class golf courses, and further south still is the colorful city of Hoi An, which may be too touristy for some retirees. Still, it is quite vibrant, with plenty of restaurants, cafes, proximity to more beaches, and lots of tailor shops, if reasonably priced custom clothing interests you.

HCMC is mind-blowingly huge but may appeal if you’re all about an urban center that is rich in French colonial history. Hanoi, Vietnam’s capital, is in the north, so it’s not quite as toasty, temperature-wise, as HCMC. Other smaller communities that expats consider, says International Living, include Dalat, Nha Trang, Vung Tau, and the island of Phu Quoc.

Vietnam’s tropical monsoon climate appeals to many — especially snowbirds who simply want to say good-bye to North American winters. However, it’s definitely not for everyone. Temperatures can easily reach 100 degrees Fahrenheit and above in some areas in the hottest months, and humidity reigns throughout the country.

The seasonal climate varies depending on whether you’re inland or on the coast, in the north or in the south. Check out the official Vietnam National Administration of Tourism website for more weather details.

7. The History And Culture

From its ancient temples and pagodas to its more current 20th-century war history, Vietnam offers so much for retirees who want to broaden their minds with an exploration of Vietnamese and Southeastern Asia historical and cultural events.

There are countless opportunities to join cultural tours and classes to learn how sleeping mats are woven from dried reeds or how commerce works in the Mekong Delta floating markets. Museums detail Vietnam’s history of multiple invasions, and you can even wiggle through the Chu Chi Tunnels, a system of underground hiding places used by Viet Cong soldiers.

Of course, a country’s culture is often best experienced simply by strolling through a neighborhood, eating local foods, watching families play in the park, or taking in a local theater performance. Again, Vietnam offers plenty of opportunities to do just that.

Jefferson Saunders moved to Vietnam in retirement in 2016, having spent time in the country before. Though he was drawn, like many others, by Vietnam’s friendly people and affordability, he’s increasingly interested in watching the evolution between the old and the new. There is “higher education, better income, internet, more traveling, along with serious investment money coming into the country,” an emerging market.

Now 70 years old and married, Saunders, who spends his days working in his large tropical garden featuring banana and jasmine trees (“[I’ve] lost 20 pounds and bulked up in muscle”), notes that Vietnam’s big cities feature Western-style medical clinics and hospitals, as well as high-end hotels, often backed by Japanese or Korean investors. He also sees Vietnamese society increasingly rejecting some of the issues that have plagued the country in the past, such as petty crime and litter.

Challenges Of Retiring In Vietnam

Unlike some countries, like Mexico, Vietnam does not have a “retirement visa,” so it’s not so easy for retired folks who are no longer working to stay in the country long term. There are tourist visas that may require you to leave the country every 90 days (rules vary depending on what country you’re coming from).

Then there is a type of visa for foreigners who are employed by Vietnamese companies, as well as an “investor visa,” for people who start a business in Vietnam or invest in an existing company. Expat Neil Varden says it best: “Visas are not so easy. The rules always change.”

For current details about visas, consider this information from the Vietnam National Administration of Tourism website. U.S. citizens can review details at this Vietnam embassy website. Some companies can help you (for a fee) through the application process.

Regarding communication in the country, Minett notes, “The language is definitely a challenge. It is one of the more difficult languages to learn and being tonal [where the pitch tone distinguishes the meaning of words] doesn’t help a native English speaker.” Varden notes that unless you know how to speak Vietnamese, it can be very difficult navigating everything from opening a bank account, to paying the electric bill, to arranging for a ride-share for the first time.

Varden says that having a local friend or person to help with these everyday tasks can be invaluable, at least the start of a new life in Vietnam. Even with English widely spoken in the big cities, “the level of understanding might be less than expected.”

Finally, pollution can be a problem in Vietnamese cities, due in part to the ubiquitous car and motorbike traffic as well as limited environmental policies, says Leffel in A Better Life For Half The Price.

However, there are certainly rural or coastal locations that offer more to retirees in terms of nature, if you’re not looking to relocate to a city. And, of course, one of the best ways to determine if Vietnam is an ideal long-term destination for you is to book a lengthy visit, when possible. 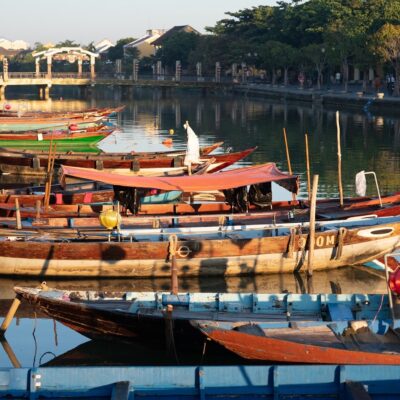