For a chance to walk amidst the spectacular organ pipe cacti that rise from the desert floor to form giant prickly bouquets of green stems, there is just one place to go in the United States: Organ Pipe Cactus National Monument.

The southern-Arizona national monument is known for its wealth of the distinctive cactus species that is whimsically named after a pipe organ. The region also stands out for its warm and sunny winter weather that allows for stellar hiking, biking, and camping from about November through March.

Although organ pipe cacti are common in neighboring Mexico, stands of the species stretch north only as far as the land along the Sonora-Arizona border. That makes Organ Pipe Cactus National Monument the only place in the United States where its namesake cacti are found in abundance. In fact, the park’s unique habitat has earned it an international designation as a UNESCO Biosphere Reserve.

At about two hours from either Phoenix or Tucson, Organ Pipe Cactus National Monument makes for a great Arizona road trip. The park is located along Highway 85 about 20 miles north of the Lukeville/Sonoyta border crossing.

The Organ Pipe website notes that the national monument is a safe place to visit, with some precautions. It is important to remember, however, that Organ Pipe has experienced violence in the past — most notably in 2002 when park ranger Kris Eggle was killed while pursuing members of a drug cartel who had fled into the United States after committing a string of murders in Mexico. Today, signs are posted along scenic roads and trails, warning visitors of the possibility of drug and human trafficking.

When I visited in November, the park appeared quiet and safe, and I encountered no trouble whatsoever. Still, as in any remote outdoor location, it pays to be vigilant.

There’s nothing like a walk in the Sonoran Desert to remind you of the grandeur of nature, even in the harshest of conditions.

Organ Pipe has a variety of hikes that will get you right into the middle of it all. From the easy Nature Trail and Desert View Trail located near the monument’s visitor center to the numerous moderate trails in the Puerto Blanco Mountain area, the park offers plenty of variety.

Pro Tip: Although a desert walk is not recommended in the extreme heat of summer, temperatures are optimal from November through April for a jaunt amidst the organ pipe giants.

Scenic roads don’t get much more remote or spectacular than the Ajo Mountain Drive, located just across Highway 85 from the monument’s visitor center.

While the 21-mile route is the most popular scenic drive in the monument, it was mostly free of other vehicles when I drove it on a November Saturday, adding to the feeling of being in the middle of nowhere.

Numerous pull-outs are available for stopping and taking in the distant mountain peaks and a wide variety of cactus life. Organ pipe cacti are the obvious stars, but there are plenty of saguaros, chollas, and ocotillos dotting the landscape as well.

If you don’t feel comfortable driving the route yourself, you could take a three-hour ranger-guided tour from January to March, for a small fee.

The scenic road is mostly gravel and is usually passable by passenger cars, although RVs over 24 feet are prohibited. At a certain point, the road transitions into a one-way loop section, after which drivers are not able to turn around and return the way they came.

Pro Tip: Because of the proximity to the Mexican border, there was a spot along the drive where I was surprised to receive a cell phone text message from my service provider, Verizon, welcoming me to Mexico. When I inquired later at the visitor center, I was told that, no, the road does not cross the border, but yes, service often gets confused by a nearby Mexican satellite tower. I did not need to use my phone along the way, so it was not a problem for me. But the visitor center attendant said some drivers have encountered issues in dealing with Spanish-speaking operators when trying to make a call from the road.

For a true adventure, visitors could choose to bike the scenic roads of the national monument rather than drive.

The monument’s website notes that all of the scenic roads that are open to vehicular traffic are also open to bike traffic, although none of the hiking trails are.

While the Ajo Mountain Road is popular among cyclists, the park advises cyclists to ride defensively since drivers are often focusing on the beautiful scenery and might not expect a bicyclist.

The most iconic of the hikes in Organ Pipe National Monument is the Double Arches Trail through Arch Canyon. The trailhead is located at about the halfway point along the Ajo Mountain Road.

Even before you arrive at the trailhead, you’re sure to spot the two arches, one on top of the other, high in the mountain range and backed by the blue Arizona sky.

An easy, 1.2-mile roundtrip hike will get you to the end of the maintained trail, where an unofficial social path heads upward behind the arches. The hike to that point offers plenty of opportunity for viewing the arches from below, and the monument’s website stresses that the primitive social trails are strenuous and unmaintained, with precarious footing.

5. Learn About History At The Visitor Center

The first stop you should make upon arriving is the Kris Eggle Visitor Center, where you’ll find history about the fallen park ranger who the center is named after, as well as exhibits about the ecology, culture, and history of the area.

After browsing the exhibits, head to the small movie theater for an informative film on the people who have lived in the area over the past 1,600 years ago or so, their ancestors leaving behind projectile points, seashells, pottery, and rock art. The center also includes a small shop that stocks books, maps, and souvenirs.

6. Camp Under The Stars

For a chance to sleep in the desert beneath a dark sky illuminated by countless stars or the glow of a full moon, consider camping in one of the 34 tent sites or 174 RV sites at the Twin Peaks Campground. Four primitive sites are also available at the Alamo Campground, a desert site located in the Alamo Canyon.

During the off-season (April through December), Twin Peaks sites are first-come-first-served, with self-registration. In the peak season (January through March), advance registration is required by visiting www.recreation.gov.

Pro Tip: With average high daytime temperatures in the 70-degree range from November through March and nighttime lows in the 40s, winter camping is popular at Organ Pipe.

Anchored by a historic train depot, the town center is a lovely spot to take an evening stroll as the sun sets. Afterward, consider stopping by Tacos El Tarasco for a dinner of authentic Mexican cuisine.

Wander a few blocks off the town center area, and you will pass by the colorful murals that adorn the walls of many Ajo businesses. Be sure to take a walk down Artists Alley, where Southwest-inspired art lines both sides of the lane.

For a wonderful alternative to camping at Organ Pipe, check out the Sonoran Desert Inn and Conference Center, a 1940s-era elementary school campus that has been transformed into a unique inn with a fascinating “Southwest Industrial” design.

As you make your way between Ajo and Organ Pipe, you will come across the tiny unincorporated community of Why. The name, which has appeared on many lists of unusual town monikers, is said to have originated as the spot where two highways — 85 and 86 — formed a Y intersection.

Today, Why is mostly a stopping-off spot for people in need of gasoline or supplies as they head toward Organ Pipe or the Mexican beach town of Puerto Penasco (Rocky Point).

The Why Not Travel Store has a range of deli offerings, snacks, and fast-food items. It is also a good place to stretch your legs and take a restroom break before continuing on down the road. But mostly, a stop in Why is about that quirky name.

Pro Tip: Although Organ Pipe National Monument can seem remote, it is actually located along the route that many Arizonans drive to get to Puerto Penasco, a beautiful Sonora, Mexico, town on the Sea of Cortez. During busy beach times, expect to encounter plenty of traffic on Highway 85, as well as several immigration checkpoints. 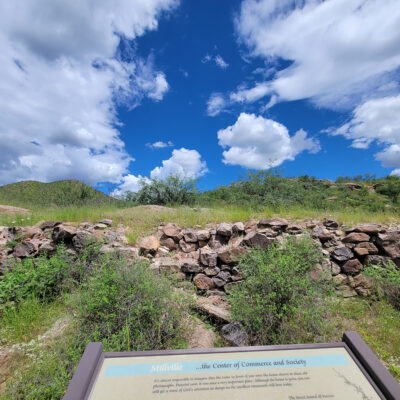