Arizona is home to thousands of ancient ruins, from multi-story cliff dwellings that housed an entire village, to one-room adobe structures. Most of them are easy to find, preserved in the dry desert.

Though we rarely find small ruins, barely more than a few walls while walking in the desert, the larger and most spectacular ones are easier to find. Incorporated in national parks, monuments, state parks, or city museums, there are opportunities to not only see them, but learn about the ancient civilizations that built them.

Exhibits surrounding these ruins help us get an idea of the way people lived in this seemingly inhospitable environment. They also offer explanations about what happened to the people who built them. Visitors can learn not only about ancient Arizona but also about the modern-day Native tribes, descendants of those who built these structures.

From cliff dwellings to large stand-alone structures, the following are a few of the most spectacular ancient ruins in Arizona.

Named after the legendary Aztec king, Montezuma Castle is a misnomer. The ancient people who built it had nothing to do with the Aztecs (unless they traded with them), and they built it about a thousand years before king Montezuma was born. However, looking at the impressive five-story cliff dwelling, it is easy to imagine why the first settlers of European descent mistook it for a “castle.”

Carved into the limestone about 100 feet above the seasonal Beaver Creek, the 20-room high-rise structure housed a community of about 35–50 people who lived here between the years 1100 and 1400. They accessed the rooms with a series of ladders that could be pulled in for the night, had gorgeous views of the valley, and the structure offered cooler temperatures in the summer and higher temperatures in the winter.

Since there are no written records to tell us what they called themselves, we call them Sinagua, after the Spanish term for the San Francisco Peaks, “a sierra sin agua.” They lived in the Verde Valley in several communities; Montezuma Castle is only one of them.

One of the best-preserved cliff dwellings in the U.S., Montezuma Castle is still 90 percent original, and easy to visit. To reach it, follow the sign from the turnoff on I-17 between Phoenix and Flagstaff. Once there, stop at the visitor center to learn about the site, then follow the trail in the shadow of mature Arizona sycamore trees.

About 25 miles from Montezuma Castle, the ruins of Tuzigoot preserve another village built by the Sinagua. A much larger community, Tuzigoot was home to about 250 people living in a citadel of about 110 rooms on top of a hill. A more open area, the hill overlooks a large area of the Verde Valley, including Tavasci Marsh, a riparian area created by the Verde River.

The hilltop pueblo offered not only more space, but a larger area to grow crops along the Verde River. They also had a variety of ecosystems, from the hilltop to the marsh and floodplain below. Still, the Sinagua only lived here during the same time period they lived in Montezuma Castle, moving on around the year 1400.

The visitor center houses the Tuzigoot museum, showcasing artifacts found at the site and offering background information about the Sinagua and the village they built. From there, a self-guided, one-third-mile paved trail leads to the citadel on top of the hill. From the farthest point, another half-mile trail leads to an overlook of Tavasci Marsh.

You can reach Tuzigoot National Monument by taking exit 287 off I-17 between Phoenix and Flagstaff, then follow the signs to the national park.

Pro Tip: The trail through Tuzigoot is open with no shade. Make sure to wear a hat and sunscreen and carry water in this high desert setting.

Sinagua communities also lived in and around the area known today as Walnut Canyon, near Flagstaff. They farmed the canyon rim, growing corn, squash, and beans from about 600 AD. Around the 1100s, they moved into the limestone alcoves below the rim where they built the cliff dwellings we can still see today. They lived in these structures until about 1400, when they moved on, like the rest of the Sinagua communities.

You can visit the cliff dwelling at Walnut Canyon National Monument. Stop at the museum in the visitor center where the exhibits offer a background story into the lives of these ancient people.

Walnut Canyon National Monument is about 20 miles from Flagstaff. You can reach it either from I-40 or the historic Route 66.

Pro Tips: The park is at an elevation of 7,000 feet, and those prone to altitude sickness might have trouble with the elevation change on the trail. Stop often, drink plenty of water, and take it slow if you are prone to it. Also, remember to have sun protection since most areas of the trail are exposed.

Near Sunset Crater — between the Painted Desert and the highest peaks of Arizona filled with Ponderosa Pines — the ruins of Wupatki remind us of the ancient civilization that lived here shortly after the eruption of the youngest volcano in the area. They were the ancestors of the present-day Hopi and Zuni tribes, the Ancestral Puebloans, who settled and built their villages here around the 1100s.

Wupatki Pueblo is the largest of several ruins at Wupatki National Monument, and it is also home to the visitor center. Here, a small museum offers background information about the area, the people who lived here, and the ruins within the park.

From here, a trail leads through the pueblo, offering a closer look at the largest structure in the village, the four-story Tall House featuring 100 rooms. Farther along, the trail leads to a large kiva you can enter, and farther down, an ancient ball court.

Besides Wupatki Pueblo, stop at the other ruins — Wukoki, Lomaki, Box Canyon, and Citadel Ruins. They are all easily accessible from the road.

The Wupatki Ruins are on the Sunset Crater and Wupatki Scenic Road, just northeast of Flagstaff, off US-89 North.

Editor’s Note: The National Park Service announced on August 18, 2022 that the Sunset Crater Volcano is partially open with limited services following the Tunnel Wildfire destruction. The Lava Flow and A’a trails are open. The Visitor Center, Lenox Crater and Lava’s Edge Trails, as well as the Cinder Hills Overlook remain closed. For the most up-to-date information, please visit NPS.gov.

You’ll find two sets of cliff dwellings at Tonto National Monument in Roosevelt built around 1300 by the Salado people, a small prehistoric cultural group. Living in the Tonto Basin between 1250 and 1450, the Salado people were a mix of a few individual groups that migrated into the area over a few centuries.

The Hohokam, also known as the Ancient Sonoran Desert People from today’s Phoenix area, settled here around 700 AD and mixed with an existing local population. A few centuries later, around 1100, the Ancestral Puebloans also settled here, followed by the Mogollon groups. A unique mix of these cultures created the Salado Culture.

The two Salado-style cliff dwellings showcase this mix of cultures at Tonto National Monument. Built in a natural alcove above Cholla Canyon, a side drainage of the Salt River, the lower cliff dwellings feature 20 rooms. They are accessible through a self-guided tour at the end of a mile-long paved but steep trail that includes a few stairs. You can only visit the upper cliff dwellings with a guided tour.

Tonto National Monument is about 100 miles from Phoenix, along Route 188, accessible off AZ-87 South.

Dominated by the four-story “Big House” that gave the site its name, the ruins of Casa Grande preserve a prehistoric village of the Ancestral Desert People, also known as Hohokam. Once home to a farming community, a gathering place, and ceremonial center of the Desert People, the remains of this ancient community stand out in the surrounding low desert.

Protected within the Casa Grande National Monument, the ruins tell the story of the ancient canal makers who tamed the surrounding inhospitable desert. Creating canals to bring water from the Verde River to their communities, the Sonoran Desert people created an irrigation system that made farming in the desert possible. They grew corn, several varieties of beans, squash, cotton, and tobacco.

Though the village existed earlier, the large four-story structure in the center of the archaeological site was built in 1300. Archaeologists still don’t understand its exact purpose, but it seems to signal that the community was one of greater importance among the many villages along the canal system.

They might not be as spectacular as some of the above ruins, but Pueblo Grande Ruins are the most accessible of all ancient ruins in Arizona. Laying in the very center of Phoenix, a short tram ride from Sky Harbor Airport, Pueblo Grande is easy to visit, no matter how much time you have in Arizona.

Preserving the ruins in a village of the same Sonoran Desert People, also nicknamed the “canal makers,” the archaeological park features several structures that answer the questions of how these ancient people lived in this inhospitable environment.

Along the trail, you’ll walk by a desert garden irrigated the same way the ancients did, a ball court, and several structures showcasing the sequence of building practices. A reconstructed stand-alone pit house showcases the older versions of the community, while later versions are built as complex structures with multiple rooms.

At the far end, you’ll see the Phoenix canal still in use, originally dug by the Hohokam who also built Pueblo Grande, proving that they were indeed some of the best engineers of the ancient world.

Other Spectacular Ancient Ruins In Arizona Only Accessible With A Guide

Some of the largest and most spectacular ancient ruins in Arizona are only accessible if you join a ranger-led tour. This is the case with Betatakin and Keet Seel at Navajo National Monument, as well as all the cliff dwellings inside Canyon de Chelly. All of them are visible from the rims of the canyons, but exploring them with a ranger or local guide can make the experience unforgettable. 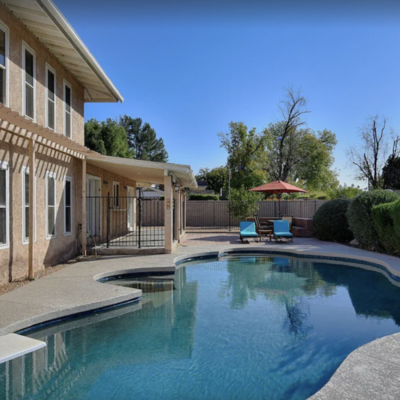 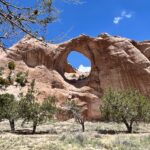